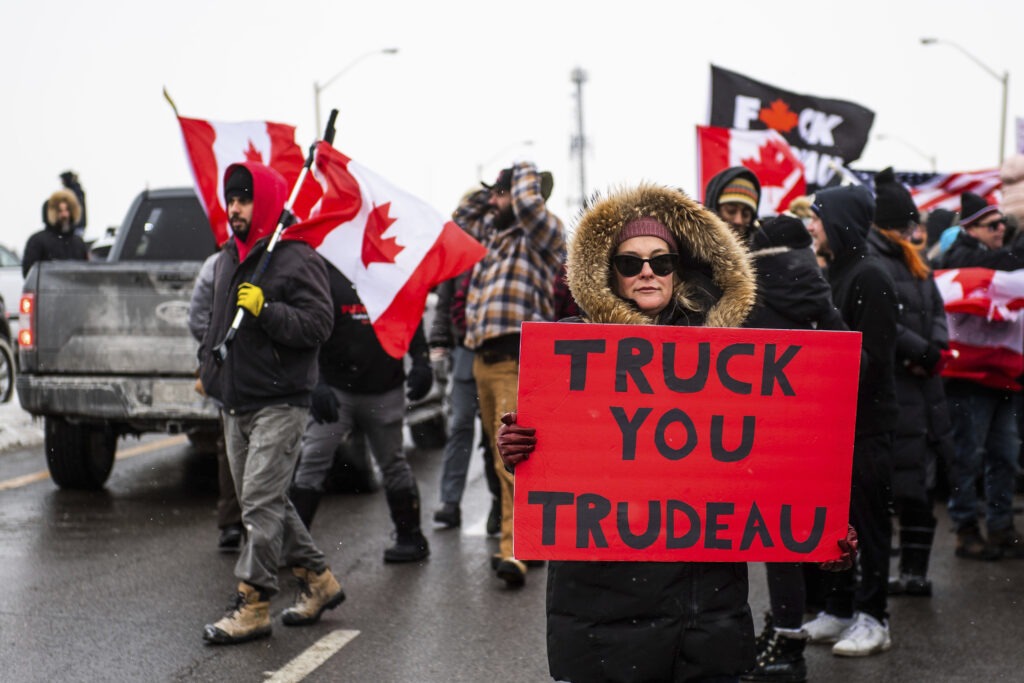 Protestors show their support for the Freedom Convoy of truck drivers who are making their way to Ottawa to protest against COVID-19 vaccine mandates by the Canadian government on Thursday, Jan. 27, 2022, in Vaughan. (Photo by Arthur Mola/Invision/AP)

People, there’s something very BIG going on in Canada today.

But first some vital history:

This pivotal launch was identified as the first punch of a two-punch strategy to immediately terminate the ongoing and meticulously planned Covid vaccine genocide being carried out by power elite worldwide.

Because Canada is truly the weakest link in the NWO chain—that’s why!

But why is that?!

Because Trudeau has become the George Soros-controlled puppet who everyone loves to HATE.  Even lifelong liberals throughout the 10 Canadian provinces and territories deeply detest what Trudeau has done to the once great nation of Canada. 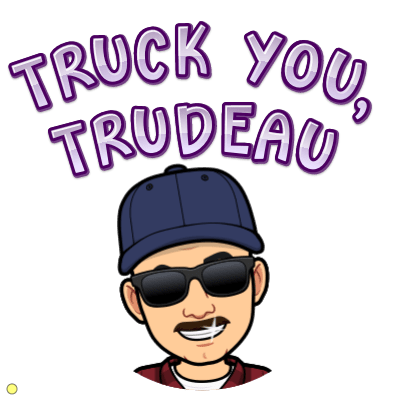 In point of fact, Canadians are livid that their globalist prime minster has turned Canada into the most locked down and vax mandated country in the Western Hemisphere.

Even today, very few folks understand the very stealthy New World Order agenda at work in Ottawa for several decades.  The NWO globalist cabal has used the treacherous Trudeau political family to execute a perfidious plan to subjugate Canada to the well-hidden One World Government that no longer wants to operate in the shadows.

As more and more Canadians wake up to the hard ugly fact that there’s a stone-cold traitor living at 24 Sussex Drive, the more who are eagerly joining and/or supporting the unparalleled FREEDOM CONVOY 2022 movement. 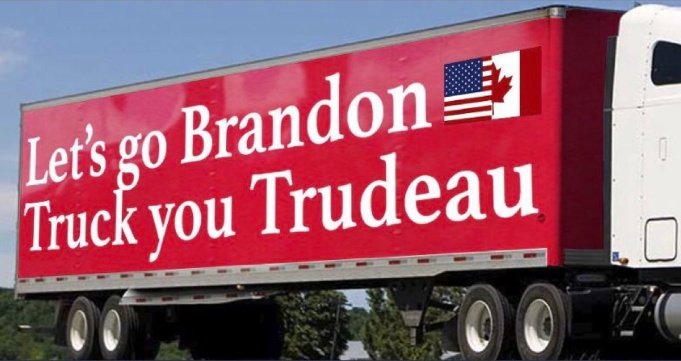 The preceding photograph perfectly sums up the FREEDOM Movement strategy at work in North America for the rest of this decisive year of 2022.

First, we totally take down the Covid tyranny holed up in Ottawa (that’s in process).  Then, we quickly remove the POTUS imposter and Vaxxer-in-Chief in the White House.

KEY POINT: Any occupant of the Oval Office, who is recklessly telling the American people to get the dangerous and deadly Covid jabs, is not only totally unfit for any public office, they need to be securely housed in an institution for the criminally insane.

Back to the critical “one-two punch strategy”: You see, once the American truckers see how easy it is for their Canadian compatriots to lay seize to Ottawa (thereby shutting down the Canadian government), they will drive their rigs to Washington so they can completely own the infamous Beltway and beyond. See: Massive Truck Convoy Heading to Washington After Ottawa

Who doesn’t know that, “when the United States catches a cold, the whole world come downs with pneumonia”?

Which means that the upcoming siege of Ottawa is the necessary first punch that sets up the much more important knockout punch that will drive the wholly illegitimate Biden administration out of the nation’s capital—FOREVER!

Now the reader knows why there are two awesome memes – “Let’s go Brandon” & “Truck you Trudeau” plastered on many of the trucks snaking their ways across Canada to meet up in Ottawa.

Both Biden and Trudeau MUST go.  They are both extremely corrupt and criminal pretenders who are key globalist mouthpieces being cynically used to implement the exceedingly lethal Covid Super Vaccination Agenda worldwide.

Therefore, We the People, (i) have every legal right, (ii) possess the lawful power and (iii) hold the legitimate constitutional authority to evict all of the Covid criminals who populate the highest echelons of the US government and Canadian government, by every means necessary and any means possible.

As every American Patriot prepares to TAKE BACK OUR HOUSE (also known as United States Capitol), let’s first take needed inspiration from our great brother and sister Patriots to the north. 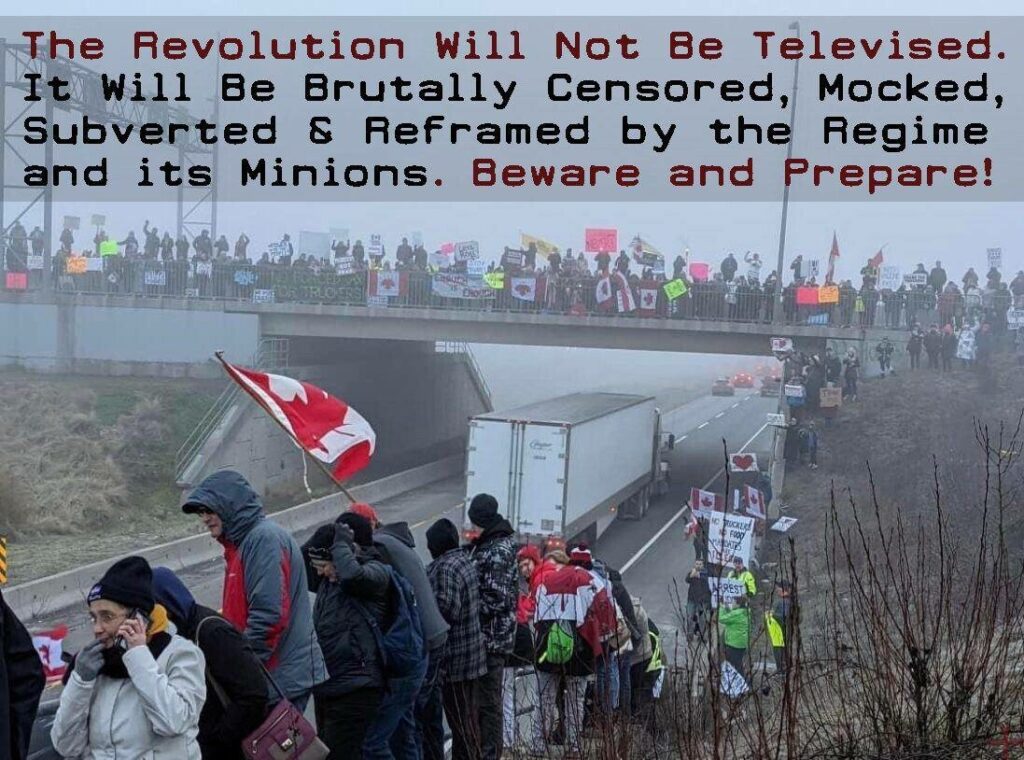 So let’s get going you American truckers. Canada has issued a clarion call for every truck-driving Patriot—WORLDWIDE!

Grab your MREs, fill up your thermoses, fire up your rigs and get those eighteen wheelers to the Beltway—ASAP!

And be prepared to shut down that God-forsaken city-state until the Demonrats scurry and scamper away from the swiftly sinking ship—the USS Biden.  The many RINOs also need to be held fully accountable for enabling this rapidly unfolding Covid injection genocide.

First: PRAY to God Almighty like there’s no tomorrow… … …because if the very brave FREEDOM Movement does not receive divine protection post-haste, there won’t be a tomorrow… for any of US.

Secondly, CHANT this most sacred slogan and divine mantra that has inspired humanity since time immemorial.  For when a critical mass of humanity is passionately chanting “freedom! Freedom! FREEDOM! FREEDOM!” — in perfect unison — with all their hearts and minds, bodies and souls, FREEDOM will quite dramatically break out across the land.

Thirdly, SHOW UP wherever you need to show up, and DO whatever you need to do, to support the cause of freedom around the globe, across the nation, in your city or county or state, within your faith community, in your neighborhood and workplace, with your family, etc.

Lastly, REMEMBER to take back your power, stand in your own truth, and speak that truth to power with the courage and conviction of the greatest of prophets and saints in your chosen spiritual tradition. Got it?!

Now listen to this resounding FREEDOM chant toward the end of this epic protest that recently took place on the National Mall in Washington, DC.

The Chant That Is About To Change The Entire World

SOTN Editor’s Note: For the uninitiated, these once United States of America right now finds themselves in the midst of the Second America Revolution.  Just like General George Washington and his troops crossed the frozen Delaware River in December of 1776 during the First American Revolution, the truckers of America will hopefully cross the freezing Potomac River in February of 2022.  This extraordinarily harsh winter has been quite purposefully geoegineered by the NWO globalist cabal to chill even the thought of conducting mass protests in the Washington, D.C. this cold season.  The Omicron variant was also deliberately released this past Fall to sicken and debilitate as many citizens as possible in order to effectively paralyze the FREEDOM Movement.  Therefore, this crucial phase of the revolution requires great sacrifice on the part of everyone, particularly the truckers.  Hence, all the more reason to take inspiration from our Canadian trucker role models who are experiencing an even colder winter north of the border.  As they say, “There’s nothin’ like Canadian cold!”