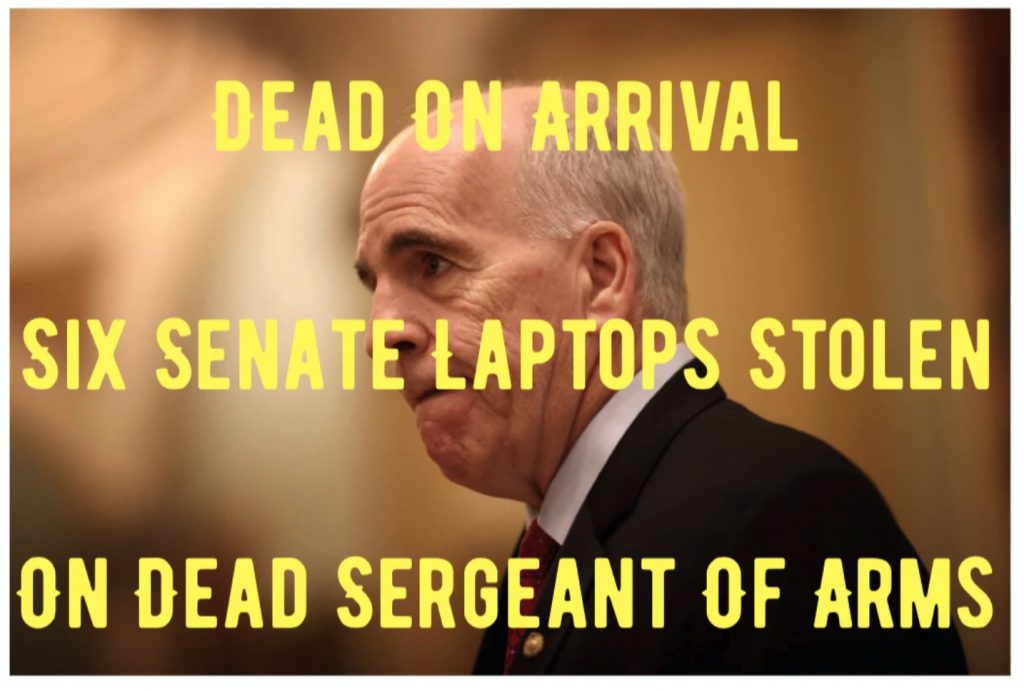 A Senate Blackberry belonging to Joe Biden found in May 2017
connects to yet another death on Capitol Hill – this time
the Senate Sergeant at Arms.

Journalist George Webb was told a network of encrypted Blackberrys in the Senate Sergeant of Arms was being used for covert actions like Libya, Syria, and Ukraine in May 2017, and the bodies have been stacking up ever since.

I wrote about six Senate laptops stolen from the US Senate Sergeant of Arms office after the events I witnessed on January 6th.

Now a key witness to the fact, Michael Stegner, the Senate Sergeant of Arms, appears to have been murdered on his way to January 6th testimony

Journalist George Webb wrote a book about the removal of the Senate and House “Ukraine laptops” on January 6th, 2021 called “At One They Strzok”.

I had the good fortune of having a long-time Biden adviser drop one of the US State Department Blackberrys configured for the US Senate in my lap in May of 2017.

In a potential scheme to implicate the Bidens only in dark weapons dealing in Ukraine, the actual perpetrators may have given away key incriminating evidence about themselves.

These Blackberrys connected to the Senate Sergeant of Arms laptops I was told. Kickbacks for energy deals in Ukraine seemed to be the motivation for the US Senators like Joe Biden.

One thing is for sure – the “specially configured” US State Department Blackberrys keep leading us to a Ukrainian Billionaire named Igor Kolomoisky. We seemed to be finding one Kolomoisky skeleton in the closet after another looking at the US Senate Ukraine energy deals

These “special” US State Department Blackberrys traced all the way back to Beau Biden in Kosovo and Serbian NATO conflicts, and I just made a trek through all these countries tracing the Blackberrys’ early history with the Bidens.

Key Democrats in Congress appeared to be selling access to covert operations through an encrypted Blackberry network.

From the very beginning in September 2016, I was on a hunt for US State Department Blackberrys used by Hillary Clinton and her executives John Podesta and Huma Abedin at the Clinton Foundation for Libya topple gains being used to fund Hillary Clinton’s 2016 Presidential Campaign. All suspicions on the very start, beginning with the seemingly fraudulent DNC ‘hack”, focused on one Dmitri Alperovich.

I knew Dmitri as the CEO of a hacking team we bought at Network Associates in 2000 to write viruses and port the PGP encryption software to various platforms. From the outset, I knew proving the case against the Clinton Foundation for money laundering would require finding the US State Department Blackberrys that Dmitri configured. I wrote a book later about my chase to find the Dmitri Alperovich US State Department Blackberry trove called “Blackberries Matter” which again was an Amazon bestseller and then also quickly banned.

Journalist George Webb wrote a book about the search for Dmitri Alperovich’s US State Department Blackberry trove called “Blackberries Matter” which quickly became a best seller and then was almost immediately banned.

The part I find amazing about all the early work I did on the Clinton Foundation and the “specially configured” US State Department Blackberrys is how they still lead directly to the biggest stories in Ukraine – Kolomoisky and Dmitri Alperovich’s Ukraine.

Putin has publicly stated his invasion is about rounding up Kolomoisky’s Azov Batallion, and many believe Kolomoisky’s dark weapons used since 2014 in various Azov overthrows around the world are still stockpiled somewhere in Ukraine.

Almost six years ago, I began a video series with the first title – “Where is Eric Braverman”, referring to the missing CEO of the Clinton Foundation, Eric Braverman, who had gone missing right before the 2016 Presidential Election.

George Webb’s best-selling book about the Clinton Foundation’s laundering of Libya overthrow profits was called “Awan Minutes to Midnight”. It was quickly banned on Amazon after selling over 3,000 copies in a few months’ time.

I also connected Kolomoisky through the DNC with Clinton Foundation President Eric Braverman. Along the way in my reporting about the CEO of the Clinton Foundation, I was given very credible information Braverman was safe in Israel, having been given safe passage to Tel Aviv, and then been secreted away to a nearby kibbutz run by Facebook/Meta CEO Mark Zuckerberg’s brother. It turned out the Braverman had indeed met with Igor Kolomoisky of Ukrainian Azon Battalion fame in Tel Aviv before being secreted out of the public view.

Journalist George Webb extensively detailed the evidence against the Clinton Foundation’s laundering of dark weapons profits obtained from the overthrow of the Libyan Government in 2011.

One thing is for sure now though -Michael Stenger is dead. And the Senate Sergeant of Arms secrets may have died with him.