“Disturbing economic, political, and social trends are already in motion and now accelerating at breathtaking speed…and they cannot be stopped!”

Europe is the loser in all situations. They still get Russian energy, they just pay far more for it, eroding their own manufacturing competitiveness, while sending Europeans’ capital to Riyadh, Beijing, Delhi and Moscow for the privilege. Swaps on oil within OPEC are already taking place and will continue.

The effect on the West of U.S. sanctions and military operations against Russia has been to lock Europe into a political and economic Iron Curtain of dependency on the United States, while driving Russia to form closer ties with the US enemies, namely China and Iran.

It is so myopically and comically stupid that only bureaucrats in their ivory towers suffering massive hubris, at the tail end of the Empires days could think such a strategy had any merit whatsoever.

So not only do these sanctions destroy Europe economically, while pushing US enemies closer together but they will inevitably cause Europeans to hate the US…

Take. Viktor Orban, Hungary’s prime minister, who accurately said that Brussels has “shot itself in the lungs” with its sanctions.

But for Europe, it is obvious that it is too late. The damage is already done, and even if they tried turning back the tide now and seeking diplomatic resolutions with Russia, China, and India too, none of them are going to trust any technocrat from Brussels no matter what bribery or coercive tactics are employed.

Now let’s move onto the USD based system because this is where the battle for the Global South is likely to be held.

This system has always been weaponized against small nations who can’t do squat, but now it has been attempted against Russia and it has been a demonstrable failure.

This is important for two reasons.

The first is that this was a shot you get to fire only once, because everything that was covert becomes overt. The gloves are off and everyone now knows it.

And secondly, because the failure emboldens those who have been under the USD yoke.

The current predicament emerging markets find themselves in…

Sanctioning Russia curtails supply of both food and energy. This combined with doing the same in the West results in dramatic cost increases in production. Most critically that of food and energy. Worst hit are emerging markets. Now with the FED raising interest rates, financial capital is increasingly drawn into the US.

This has the effect of causing the USD exchange rate to rise: 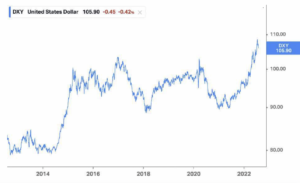 Remember; the Emerging Markets remain on the dollar based system and now find themselves with a balance of payments crisis as they struggle to service those dollar-based debts.

We all just watched this transpire in Sri Lanka, where the first of the UN’s more serious “sustainable” initiatives were implemented, namely elimination of fertilizers, leading to both a food crisis which caused a collapse in exports, leading to a balance of payments crisis, a collapsing currency, and widespread impoverishment of one of the Emerging Markets’ previous success stories

This is where the IMF and World Bank have held Emerging Market nations by the short and curlys.

Defaults of the US Debt and Asset Nationalization

Imagine for a moment you’re part of the BRICs, trying out of necessity to quickly organize a functioning system that is outside of Western dominance and coercion.

You need trade, you need liquidity of trade (a currency system), and you need tangible trust in that system (Zoltan’s outside money – commodities).

President Vladimir Putin signaled the new reserve currency would be based on a basket of currencies from the group’s members: Brazil, Russia, India, China, and South Africa.

“The matter of creating the international reserve currency based on the basket of currencies of our countries is under review,” Putin told the BRICS Business Forum on Wednesday, according to a TASS report. “We are ready to openly work with all fair partners.”

Consider this: Russia had wealth stored and stolen by the West. The rest of the world watched this take place and their faith and trust is now eroded. How can it not be?

Here’s what I think is likely to happen…… something of this nature at least.

Anyone participating in the BRICs/G8 new system will not be penalized for any debt defaults to Western/NATO/EU/UN/WEF conspirators.

Do I think the nationalization of these assets is a good idea? No… but what I think is irrelevant.

Editor’s Note: Disturbing economic, political, and social trends are already in motion and now accelerating at breathtaking speed. Most troubling of all, they cannot be stopped.