Something is hugely wrong and it appears something wicked is truly in the works.  Cars with loudspeakers are driving all through Kherson, warning citizens they must evacuate the city “BY November 7.”

Evacuation of the city has been ongoing for over a week.  The main administration building took down its Russian flag as seen in the image below: 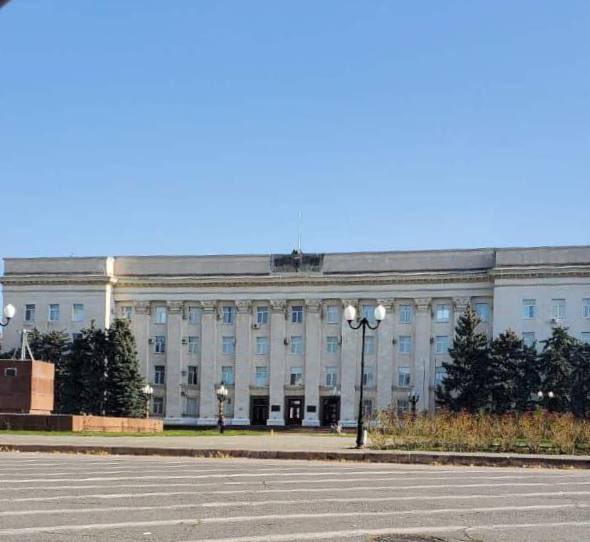 City workers have been going door-to-door telling citizens “the Ukrainian army is coming and you must get out immediately.”

Russian soldiers have either left – or been ordered to leave- their checkpoint posts in Chornobaivka, Stepanivka, Bilozerka and Korabelnyi district south of the Kosheva river. Map below shows the now-empty checkpoint locations:

There is already widespread and rampant public speculation – even in media – that this may be an attempt by Russia to create a 15 – 30km “no man’s land” to lure the Ukrainians into a trap.  The map below shows the region being emptied: Other people are speculating — and I emphasize this is MERE SPECULATION – that Russia is going to lure the Ukrainians into this area, then vaporize it with Tactical nukes and tell NATO, if you enter Ukraine, your countries will get this too.”  These same speculations claim that Russia is planning to prove it’s point once and for all: that it WILL use nuclear weapons to defend “Russian Territory.”  Again, this is SPECULATION.

Whatever is actually taking place, the now established FACT that cars with loudspeakers are driving around Kherson telling citizens they must be OUT . . . BY NOVEMBER 7, plays right into the elections here in the USA.

Many people have speculated the Democrats will do something to prevent their shellacking in the mid-term election on Tuesday, November 8.   If Russia nukes Kherson on November 7, there could very well be an actual nuclear exchange THAT DAY.

The Democrats would then use a nuclear war as an excuse to remain in power, even though there is no aspect of the US Constitution – or statute law- allowing such a thing.  The terms of office for members of Congress, EXPIRE.   Once the date in January arrives, they are all simply no longer elected office holders.  Their term ends.  Nothing they do, by “emergency” or “Presidential Order” can change the fact that the first week in January, their term is over and they are no longer elected officials.   Unless they try to force the issue through the barrels of guns.

Then, too, there’s the very fair question of why November 7?   Why would Russia play into a US election by picking that particular date?

For quite awhile, some folks considered to be on “the fringe” have argued this is all theater.  COVID, the Ukraine war, all of it.   They argue it is all planned years in advance by the powers-that-be, as either bread-and-circuses for the masses, or a true effort to smash the world through catastrophe and fear into a “new world order.”

When you also factor-in that Russia went the full “COVID-19” with a vax and lockdowns, it seems now entirely possible that the very small group of people who have told us for years that all the big events on earth are “scripted” might be right.   If a nuke exchange takes place on Nov. 7, then it __is__ all scripted.

Whoever is right, all these things seem to be telling us all, that something wicked this way comes.

If true, we have until Monday, November 7.