… and all he had to do was run a fair statewide
election throughout Florida.

Oh, now you wanna know the back story.

The back story is the same as the front story.

Because Gov. Ron DeSantis took some very serious and substantive measures across the Sunshine State to prevent the Democrat Party from perpetrating their biennial election fraud, he exposed what the Democrats routinely do (and are now doing) in the other 49 states. 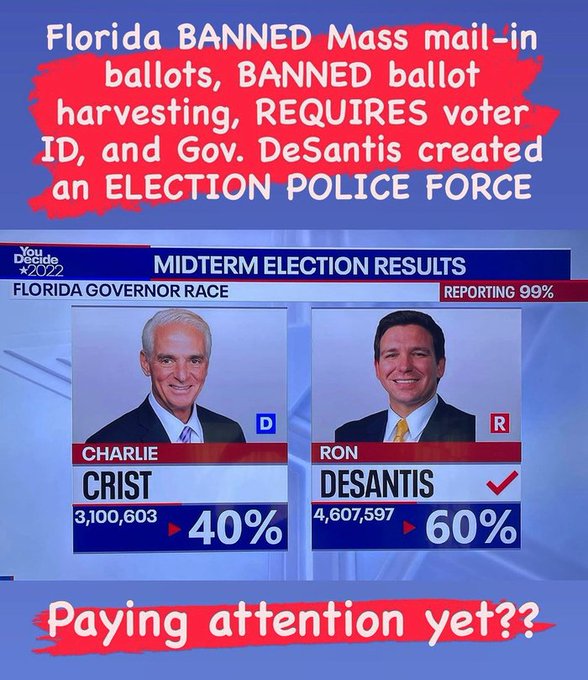 Oh, and now you want hard evidence … indisputable proof of the election thefts being carried out across the USA as you read this.

The irrefutable statistical proof is being accumulated as we write … but that’s not the least bit important right now.

Because the very same RED WAVE that just rolled
over the state of Florida also rolled over the other
49 states—THAT’S WHY!!!

Therefore, the unparalleled Democrat electoral bloodbath that just transpired in Florida should have occurred — to varying degrees, of course — in all the other 49 states.  But it didn’t because of so much Democrat-conducted vote fraud and election theft.

In point of MSM-documented fact, many of the voters in Democrat-run states were more infuriated at the Democrat Party’s totally perverted and depraved platform than Floridians were.  After all, their governor is Ron DeSantis…. and the statehouse in Tallahassee has been ruled by Republicans for many years.  Democrats, on the other hand, have been terrorized by the likes of California’s Newsom and tyrannized by New York’s Hochul.

Which points to the great likelihood that the RED WAVES would have been even larger than Florida’s in many of the other states … but they weren’t.  And that highly inconvenient truth poses BIG problems for the Democrat election thieves.

Do we need to say it again?

Because Ron DeSantis did things like this (see the articles posted below), he guaranteed that the Democrats would not even attempt the slightest fraud lest they be held up high in the middle of the public square on a sunny Florida day.  That’s really why it’s called the Sunshine State, by the way.

BOTTOM LINE: Ron DeSantis deigned to show the American people how electoral fraud is really perpetrated each and every every election cycle by the Democrat Party.  And, all he had to do was run a fair election in Florida to conclusively prove it. 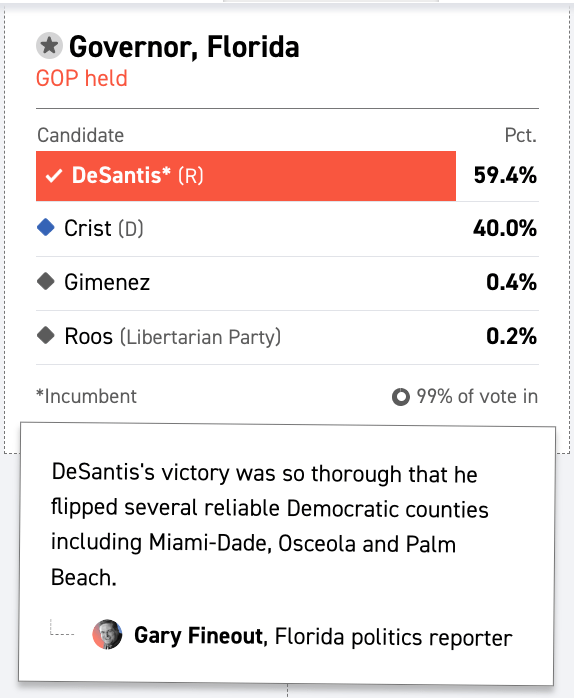 This is for the naysayers who will soon be out screaming “SHOW ME THE EVIDENCE!”

Given the OPEN-AND-SHUT CASE already presented to the American court of public opinion by the courageous actions of Governor Ron DeSantis, it’s been proven that the Democrats have already stolen, as they are in the process of stealing, countless midterm elections across the USA.

In point of legal fact, the prima facie evidence presented above is so strong that all of the irrefutable statistical proof of vote fraud currently being acquired by the super sleuths will pale in comparison.

The Armchair Election Analyst
State of the Nation
November 10, 2022