Robert Steele: Decision Memorandum for the President – Achieving the Mother of All Landslides with Six Initiatives

DECISION MEMORANDUM FOR THE PRESIDENT

Economic & Social Collapse Demand “Big & Fast” Solutions. The COVID-19 fake pandemic rooted in lies sourced to the Gates Foundation, the CDC, and the Imperial College of Great Britain as then promulgated by the Deep State’s captive media appears to have been an attempt to destroy your Presidency while also achieving massive insider trading profits including the coverage of multi-trillion dollar naked short (counterfeit) sales positions. It has left us with 60 million unemployed; 50% of both residential and commercial rents unpaid; and a very restive public inclusive of a jump in suicides (a year’s worth in the last four weeks). It has also set back your efforts to engage the larger Black community.

Economic & Social Reset is Both Affordable and Achievable. Most of the public is not aware of your negotiations with China and Russia to achieve a global economic reset inclusive of an asset-backed dollar, a debt jubilee, and perhaps the cancellation of the federal income tax. Most are not aware that you obtained $17 trillion from Wall Street to finance an economic reset. It is now clear we left money on the table. Wes Christian of Texas, among others, has documented over $100 trillion in naked short selling by Wall Street, against Main Street. A further $100 trillion is easily documentable in relation to money laundering. All tangible assets purchased with the $200 trillion in illicit wealth – mansions, islands, ranches, super-yachts, private aircraft, art collections, gold and silver bars, jewels – are immediately confiscatable through civil and criminal forfeiture, by-passing the slow and very corrupt judicial process where the wealthy have an advantage. You are in a position to demand $100 trillion at bayonet point. You are also in a position to bring no less than 40% of the eligible Black voters – and perhaps an equal percentage of Independent, Libertarian, and other voters, to your side with #UNRIG election reform.

III. The following actions are recommended:

I applaud the appointment of Jay Clayton, SEC Chairman, to the position of US Attorney for the Southern District of New York. This is a brilliant appointment that could break the back of the Wall Street criminal network – he is also positioned now to oversee a full audit of DTCC on failures to settle.

Direct the Attorney General to overturn the Holder Memorandum that de-criminalized financial crime by Wall Street, with a Barr Memorandum that reinstates jail and sets the stage for legislation that removes obstacles to shareholder lawsuits, nationalizes DTCC, and applies full federal RICO to Wall Street crime.

Reinstate William Binney at NSA as your personal representative, responsible for mapping every financial fraud transaction over the past ten years inclusive of offshore trades. He is on record as stating he can do this in 30 days with 10 people. Then he can turn his attention to all other traitors and criminals.

Invite me to create the Open Source Agency and Web 3.0 as your social-educational channel to reach all citizens including especially all Black patriots who have been excluded from your Administration’s outreach, as well as all Independents, Libertarians, Sandernistas, and others whom you also represent.

Submit to Congress and demand passage of the #UNRIG Election Reform Act of 2020 by 1 October.

Ben Garrison is America’s greatest conservative cartoonist and a devoted supporter of your re-election.  He was uninvited from the White House social media summit after he was defamed by an organized group of trolls probably organized by the Anti-Defamation League (ADL); your staff lost their nerve. The ADL has gone to great lengths to protect Goldman Sachs and other Zionist banking fronts by conflating criticism of financial fraud with anti-Semitism, just as they conflate criticism of apartheid and genocide with anti-Semitism. I respectfully recommend that you invite Ben and Tina Garrison to the White House and award him the Medal of Freedom as a signal of your strength to both the ADL and Wall Street.  The below cartoons were funded by my #UNRIG project to help you educate the public. 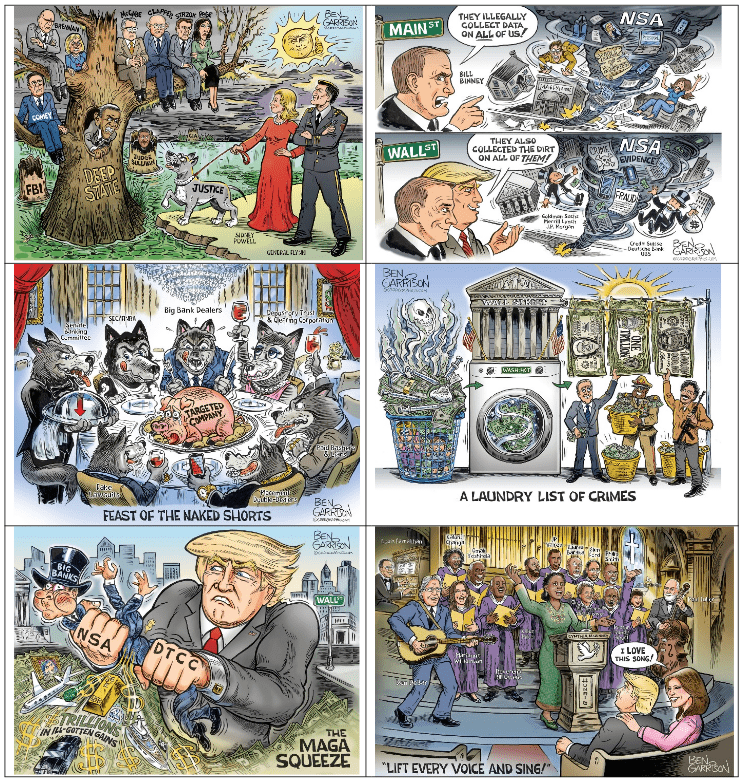