It was Joe Biden who lynched Clarence Thomas in the nation’s capital in 1991! 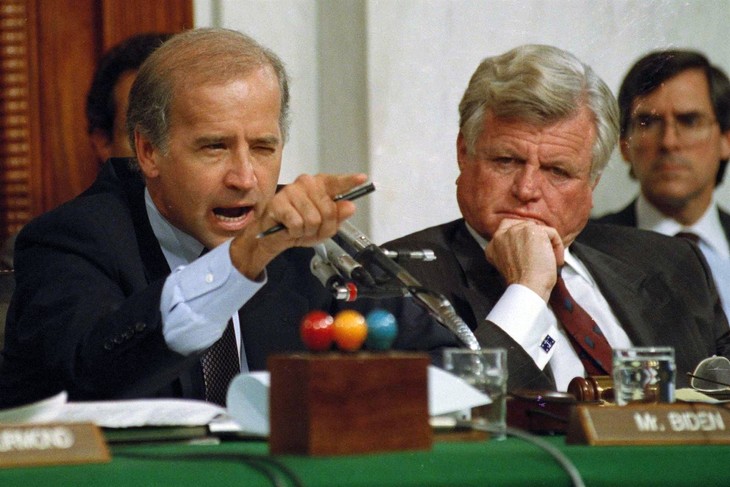 Some of you reading this post might be too young to recall what happened 29 years ago next month in the year 1991. The hearings for now-Associate Justice to the Supreme Court Clarence Thomas took place that month and the 2020 Democratic Nominee for President Joe Biden was the one leading the Judiciary Committee during the Thomas confirmation hearings.

I might want to follow up at some point on how this followed up on the politicization of the confirmation hearings that first occurred with Robert Bork in 1987 and continues to this day but I will save that for another article.

In 1991, President Bush 41 got a second chance to replace a Justice on the nation’s highest court when he decided to nominate Clarence Thomas to replace the retiring Justice Thurgood Marshall. Thomas’ nomination was following Bush’s previous pick of David Souter who sailed through the Senate easily with a vote of 90-9. A similar outcome was expected for Clarence Thomas.

Enter Joe Biden and his merry men of the Senate Judiciary Committee.

Biden and one of his very good friends and henchmen, Ted Kennedy (pictured above, possibly sober), held hearings on the qualifications of Mr. Thomas and were not able to ding him the way they had with Judge Bork 4 years prior. While the nomination of Thomas might not garner the 90+ votes that Souter had received, he would pass nonetheless, much to the chagrin of the Biden/Kennedy block in the Senate. When Nina Totenberg from NPR broke a story that a co-worker of Clarence Thomas (Anita Hill) had filed an affidavit claiming Thomas had sexually harassed her, this gave Biden the chance to re-open the hearings and try to add a lil’ more mud to the nominee before the vote.

Both Hill and Thomas were called to testify before the Senate committee and answer questions that had no place being asked by a bunch of out of touch old curmudgeons who were on their best day political hacks with very little charm.

Clarence Thomas did not flinch and looked these morons right in the eye and told them what he thought of their B.S. which you can check out below.

This is a circus. It’s a national disgrace. And from my standpoint, as a black American, as far as I’m concerned it is a high-tech lynching for uppity blacks who in any way deign to think for themselves, to do for themselves, to have different ideas, and it is a message that unless you kowtow to an old order, this is what will happen to you. You will be lynched, destroyed, caricatured by a committee of the U.S. Senate rather than hung from a tree

Thomas eventually did make it out of the Senate with a 52 yea to 48 nay vote and still sits on the court to this day.

Biden is still criticized to this day from all sides for the way he handled this hearing and the sloppy way he has talked of it since. In fact, just as he was revving up his run for President last year he had to make a call to Anita Hill to ask her to please allow bygones to be bygones according to New York Times…

Joe Biden knew Anita Hill was going to be an issue for him. So a few weeks ago, as he prepared for his presidential announcement, he reached out to her through an intermediary and arranged a telephone call, hoping to assuage her.

It did not go how he had hoped.

On Thursday, the first day of his presidential campaign, the Biden camp disclosed the call, saying the former vice president had shared with Ms. Hill “his regret for what she endured” 28 years ago, when, as the chairman of the Senate Judiciary Committee, he presided over the confirmation hearings in which she accused Clarence Thomas, President George Bush’s nominee to the Supreme Court, of sexual harassment.

In a lengthy telephone interview on Wednesday, she declined to characterize Mr. Biden’s words to her as an apology and said she was not convinced that he has taken full responsibility for his conduct at the hearings — or for the harm he caused other victims of sexual harassment and gender violence.

She said she views Mr. Biden as having “set the stage” for last year’s confirmation of Justice Brett M. Kavanaugh, who, like Justice Thomas, was elevated to the court despite accusations against him that he had acted inappropriately toward women. And, she added, she was troubled by the recent accounts of women who say Mr. Biden touched them in ways that made them feel uncomfortable.

I’m sure the regret Biden feels is that he got caught saving the skin of his drinking and carousing buddy Ted Kennedy. The committee that Biden led dragged a man through the mud vying for the nation’s highest court while sitting right next to him was a guy who did all the things Thomas was accused of on steroids. Yet Joe and the rest of the Senate looked the other way, being everyone loved hearing those stories Ted told.

While there are probably 100 reasons that Biden should not enter the Oval Office as President next year, one of those reasons was that he tried to do a high tech lynching of someone who did not subscribe to the view of Joe Biden’s America of African Americans needing to be only liberal.

“Well I tell you what, If you have a problem figuring out whether you’re for me or Trump, then you ain’t black.”

as reported by USA Today

Joe Biden sucks and if you vote for him you do also.

I bet in your heart, though, you already knew that.