SOMETHING TRULY AWESOME IS ABOUT TO HAPPEN

More accurately, We the People have won.

The January 6th Electoral College vote certification process by Congress was totally blown up — THAT’S NEVER HAPPENED BEFORE.  NOTHING EVEN CLOSE.

The Capitol Building was stormed — NEVER HAPPENED BEFORE.  NOTHING EVEN CLOSE.

Now here we are fast approaching Inauguration Day, and Washington, D.C. is being rapidly transformed into a heavily fortified city fortress — NEVER HAPPENED BEFORE.  NOTHING EVEN CLOSE.

That the power elite inside the Beltway is so friggin’ afraid of the fully armed 80 million-strong Patriot Movement speaks volumes, yes?  YES?!?!

It had to happen this way, folks.

Trump has the Democrat communists, Deep State traitors and NWO Globalist enemies of the Republic all on the defensive.

They don’t know if they’re comin’ or goin’.  FOR REAL!

That’s why they’re desperately and recklessly moving forward with both the 25th Amendment and Impeachment.  The Democrat election thieves are beside themselves with sheer fright and total trepidation.

Because Team Trump has them all dead to rights, that’s why!

The critical point here is that the whole world is watching the United States of America completely lock down the fake inauguration of imposter Joe Biden because of his naked theft of the 2020 POTUS election.

The mere public presentation of such a pitiful spectacle is waking up people across the planet to the stark reality that the Democrats just pulled off the greatest election heist in world history.

What’s “VERY BIG” is the swiftly growing awareness of such a massive, complex crime spree committed by all the usual anti-American suspects.

And, as such a brutal anti-DEMOCRATIC reality sets into the minds of Americans and other national citizenries alike, an unparalleled sea change is slowly but surely taking place.

When this vital consciousness-raising has run its course, it’s going to be quite beautiful.  And, as President Trump loves to say: “It’s going to be tremendous!”

But what exactly does that sea change really look like? As follows:

THE OLD WORLD ORDER
IS ABOUT TO DISSOLVE

We have one caveat pertaining to this utterly unstoppable scenario of global transformation.

There will be a quite dramatic and wholly unpredictable transitional period (it’s already started) that will undoubtedly unfold in fits and starts.

There will appear to be losses right after victories for the Trump Movement.  And also wins right after defeats.  That’s okay.  It always happens this way when the dark side is about to experience an epic reversal of fortune—FOREVER.

That’s also because the only way this “righting of the ship of state” can take place is through a rather tedious and complicated process that will, at first, look like a controlled demolition.

Now until this thing plays out, and the Patriot Movement is completely out of the woods (and in the Capitol), folks ought to pray like there’s no tomorrow … … …

Send info/data like this everywhere and every way you can … … …

And have faith that God’s ALWAYS in charge … even if the dark side appears to be.

For, in the end, the forces of light always triumph over the
forces of darkness.

SOTN Editor’s Note: Who among US is not well aware of the age-old truth: 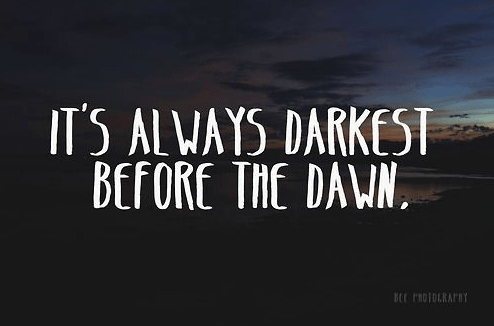