These false flag mass shootings and ensuing MSM dramas will NOT stop until Biden-Harris gut the Second Amendment.

4 killed, including child, in mass shooting at Orange office complex 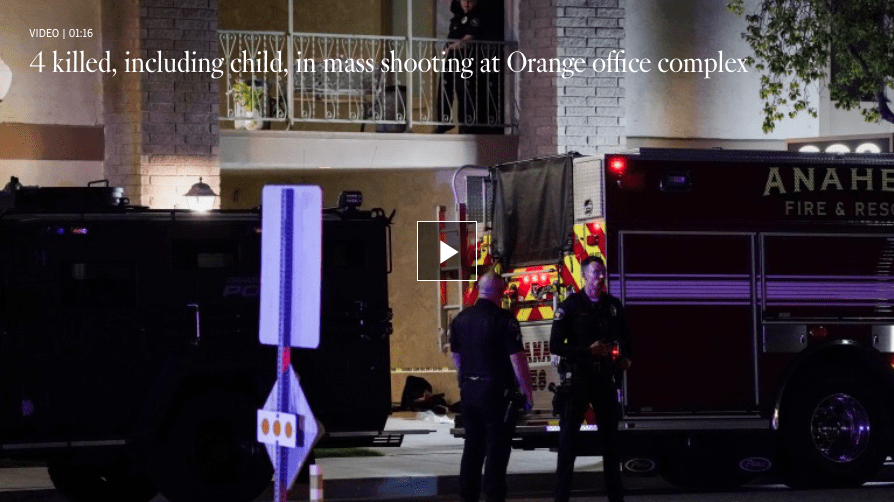 Four people, including a child, were killed Wednesday evening and a fifth person was injured in a mass shooting at an Orange office complex.

It marks the third mass shooting in the United States in two weeks, coming after incidents at three Atlanta spas that killed eight people, including six Asian women, and at a Boulder, Colo., supermarket that killed 10.

Few details were immediately available about the victims or a potential motive for the shooting.

Lt. Jennifer Amat, a spokeswoman for the Orange Police Department, said officers received a call about 5:30 p.m. of shots fired and responded to a business at 202 W. Lincoln Ave. in Orange. The beige, two-story office complex at the address contains a number of small businesses.

The officers encountered gunfire when they arrived and opened fire, Amat said. The shooter was taken to a hospital with a gunshot wound and was listed in critical condition Wednesday night. It was unclear if the wound was self-inflicted or if he was struck by police gunfire, Amat said.

There is no current threat to the public, she added. A firearm was recovered at the scene.

The other wounded person, a woman, was listed in critical condition Wednesday night.

Amat said the city hasn’t “had a situation like this since the 1997 Caltrans shooting.” In that incident, a former state employee opened fire with an assault rifle at a state maintenance yard, killing four people before dying in a shootout with the police.

The complex is home to about a dozen businesses, including an insurance office, a marriage therapist, a speech and language pathologist, a phone repair shop and several property management companies.

Amat declined to identify the specific business where the gunman first opened fire, but she said the incident began inside one of the complex’s suites before moving to a courtyard area. Investigators will spend the coming days trying to determine the exact sequence of events, she said.

Uvaldo Madrigal was in his office at Lincoln Body and Paint, his auto shop that sits next to the shooting site, when he heard popping sounds.

“They sounded very low, so I didn’t think they were gunshots,” he said.

Then Madrigal heard about 10 shots, followed by silence. He looked outside and saw about five police cars in the middle of Lincoln Avenue and officers with their guns drawn.

He rushed to the back of his shop and told an employee to get inside. Several minutes later, the police told him and his employee that they needed to leave the area; as they did, Madrigal saw two people on stretchers being loaded into an ambulance.

“I don’t know what condition they were in,” he said. “Nothing like this has ever happened around here.”

Judging by the muffled sound of the shots, Madrigal thought the rounds were being fired indoors.

“Normally when you hear gunshots out in the open they’re louder,” he said. “The gunshots just sounded lower, they sounded different.”

Nathan Zachary, 18, and his father had been cooking fried chicken for dinner when, while scrolling through Instagram, he saw news of the shooting. The two went outside to see what was going on.

“I couldn’t believe it,” Zachary said, describing the neighborhood as “a safe, really safe area.”

He and his father stood curbside in flannel pajamas, trying to track the movement of the many police officers milling about the scene.

“Hard to sleep,” Zachary said, “unless you know what’s going on.”

Camilo Akly, 28, couldn’t pick up his younger brother, who was hanging out with a buddy in a home facing the crime scene.

So on Wednesday evening, after walking several blocks to reach his sibling, then seeing “one by one by one of the police cars pulling up, then hearing the helicopter, then watching firefighters rushing in,” he paused to try and make sense of the situation.

“You think that nothing could be going on during your evening, and all of a sudden, it changes really fast,” he said. “So much to be careful of these days.”

Other neighbors spilled onto the sidewalk, filming the commotion with their cellphones and posting their recordings on Facebook, speculating about the shooter’s motives and huddling near news cameras to hear the latest updates.

Rep. Katie Porter (D-Irvine) wrote on Twitter: “I’m deeply saddened by reports of a mass shooting in Orange County, and I’m continuing to keep victims and their loved ones in my thoughts as we continue to learn more.”

Although the COVID-19 pandemic coincided with a decline in mass shootings, which dropped to the lowest levels in nearly a decade, a recent series of such attacks has left many Americans reeling and seeking answers from lawmakers.

Robert Aaron Long, 21, faces murder charges in attacks on three spas in the Atlanta area March 16. Six of the victims were women of Asian descent, spurring concerns that the gunman was motivated by anti-Asian hatred. The women’s deaths came amid spikes in anti-Asian hate crimes and other incidents of harassment, which have been rising in the last year.

In the Boulder shooting, Ahmad Al Aliwi Alissa, 21, was taken into custody and faces 10 counts of murder. The victims included a 51-year-old police officer, who was one of the first to respond to the scene. The nine other victims ranged in age from 20 to 65.