Why is the U.S. still saber-rattling against China in the middle of a global pandemic?

Trump signs TAIPEI Act, threatening ‘consequences’ for nations that fail to toe US line on Taiwan 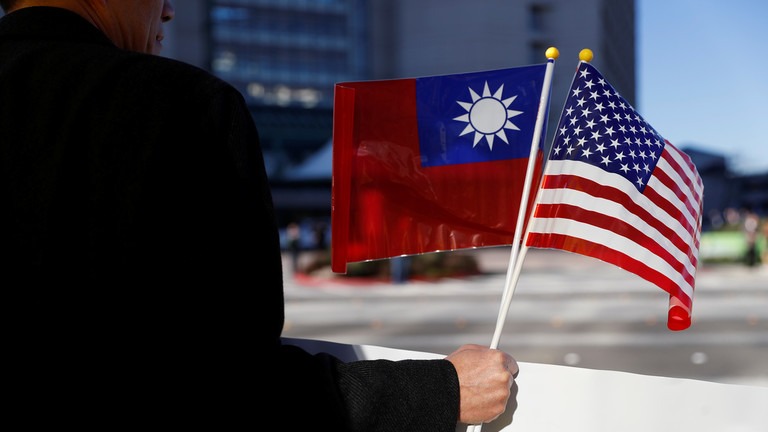 US President Donald Trump has signed the TAIPEI Act, a bill expressing American support for Taiwan and vowing to punish countries that side with Beijing on the issue, a move which is bound to further strain US-China relations.

Signed into law late on Thursday night, the bill requires the US State Department to help Taiwan strengthen diplomatic ties in the Indo-Pacific region, threatening to penalize nations that “undermine the security or prosperity” of the Chinese territory.

On March 26, 2020, @POTUS DONALD. J. Trump signed the Taiwan Allies International Protection and Enhancement Initiative "TAIPEI" Act of 2019, referred to as the "Taipei Law" 》 This is the second Taiwan Act signed by Trump after the Taiwan Travel Act https://t.co/edIkI9wveh pic.twitter.com/CEGhg0CiYn

The law is supposed to “send a strong message to nations that there will be consequences for supporting Chinese actions that undermine Taiwan,” according to its authors, Senators Cory Gardner (R-Colorado) and Chris Coons (D-Delaware).

Beijing has voiced staunch opposition to the law, passed unanimously by the Senate last October and by the House earlier this month, with Foreign Ministry spokesman Zhao Lijian urging Washington to “handle issues relating to Taiwan prudently to avoid damaging bilateral relations.” Zhao also noted the law violates the “one-China” principle, under which Taiwan is inalienable Chinese territory. The principle is often described by officials in Beijing as the “political foundation of the China-US relationship.”

In addition to frequent  transits of US warships through the Taiwan Strait, Beijing has also repeatedly expressed concerns over Trump’s military support to Taiwan and deepening US ties with the island via the 2018 Taiwan Travel Act.

Taiwan’s Economic and Cultural Representative Office – the island’s main agent in the US – hailed the move soon after the bill’s signing, thanking the president and Congress for their “staunch support.”

🇹🇼🇺🇸The TAIPEI Act was signed into law on March 26, strengthening #Taiwan’s bilateral relations and ensuring its participation in international organizations. 👏👏👏Big thanks to @realDonaldTrump & Congress’s staunch support for #Taiwan. 🥰🥰🥰

Taiwan currently maintains diplomatic relations with some 15 countries. Since Taiwanese President Tsai Ing-wen came to power in 2016, however, eight nations have severed ties in favor of China, actions Tsai has slammed as examples of Beijing’s “diplomatic and military acts of coercion.” Through the US State Department, the TAIPEI Act will look to penalize such moves, leveraging US diplomatic muscle to push countries back into Taiwan’s orbit.