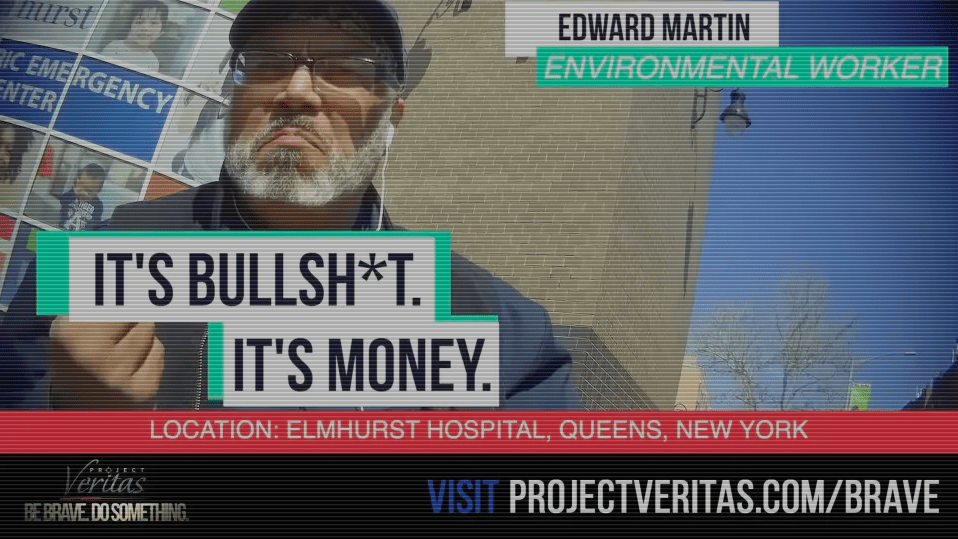 [New York, NY—April 3, 2020] Project Veritas today released another video featuring those on the frontlines discussing the media coverage, data being collected by the Center for Disease Control and Prevention (CDC), and the impact on American society as a whole.

JOURNALIST – “You think it’s all bullsh*t?”

In another exchange with a Brooklyn hospital paramedic and Veritas journalist, the healthcare worker opened up about how the CDC is counting the Coronavirus cases and how the official numbers being made public are most likely inaccurate:

PARAMEDIC: “A lot of people coming to the hospitals exaggerating and be sent home because they don’t have it [COVID-19]. So, unfortunately, when you walk in, and you say: ‘I think I have it,’ it goes down as considered a case [positive for COVID-19] and gets reported to the CDC. So it adds to the numbers.”

JOURNALIST: “So all the numbers aren’t accurate?”

PARAMEDIC: “No, because now they have to see how many of those cases are actually positive cases.”

JOURNALIST: “So the CDC is just telling us, everybody.”

PARAMEDIC: “Yeah, everybody who walks in the door that’s complaining of it gets put in as a case until proven otherwise.”

A Brooklyn hospital doctor also explained to a Veritas journalist about who is really at risk from this virus and what is most needed at hospitals as they see it:

DOCTOR: “Most people are going to be okay, some people are not. It’s just that there’s so many people getting infected that those ‘some people that are not [okay]’ are ending up here, and it’s getting overfilled.”

JOURNALIST: “Yeah, that’s for sure. Are you guys good on beds?”

DOCTOR: “Beds are okay; we need more vents. So if you have friends that have vents.”

A Healthcare Worker at the SUNY Downstate Hospital in Brooklyn summed up the difficulties that medical professionals are dealing with in this crisis:

HEALTHCARE WORKER: “They’re asking all the different private labs to try to come up with a test themselves that sees which one is the best and which one comes back the fastest. No one – there’s no centralized effort on this one.”

JOURNALIST: “So it’s all – everyone’s just kind of winging it? In other words?”

JOURNALIST: “That’s sad for you guys.”

JOURNALIST: “So, what, if they’re working on different tests, what tests are they using right now? ‘Cause I was trying to get one myself if I’m, you know, I mean, I live in New York, like…”

HEALTHCARE WORKER: “You’re not going to get one.”

JOURNALIST: “No? Under any circumstances?”

HEALTH CARE WORKER: “You can search online, and you can, you can, uh, ask your doctor. If they tell you to come to the ER, that’s false.”

HEALTH CARE WORKER 2: “You have to keep them separated.”

HEALTH CARE WORKER: “Yeah, ‘cause I had a person, I had a guy who came in, and he was like, ‘I’m really worried I have it (COVID-19). My doctor told me not to leave the ER.’ Even after I told him I – We can’t get it (COVID test) for you, and I was like, ‘I – absolutely there is no way I’m going to test you. I can’t. We don’t have enough.’ Even though his doctor said, don’t leave the ER without getting a test. So everyone’s misinformed because no one knows what’s going on. Things are changing so quickly, this is something we don’t know about, and we’re learning.”

JOURNALIST: “Yeah. Do you think the media’s covering this accurately?”

In a conversation with two NYPD counterterrorism officers guarding USNS Comfort on Manhattan’s Pier 90, the policemen provided their perspective on the media’s coverage:

JOURNALIST: “I mean, you guys see this firsthand, do you think what the news is telling you is accurate?”

COUNTERTERRORISM OFFICER KECKLEY: “We’ve been talking about this all day.”

COUNTERTERRORISM OFFICER KECKLEY: “My opinion is that they’re preparing for worst-case scenario and I don’t think it’s going to be as bad as the media portrays it to be. Like, yeah, everyone’s going to probably catch it in some way, shape, or form like the flu. It’s just like a more contagious flu that will harm more people that have pre-existing conditions.”

The brave men and women featured in this video are on the front lines of the battle
against the Coronavirus pandemic, and we salute their service to our country at this time. Project Veritas is in the field to investigate and bring the truth to light about what is happening in America’s hospitals so that the public can have access to vital health and safety information. Project Veritas will never cease investigating and reporting on matters that concern the American people and that the public has a right to know.