SOTN Editor’s Note: First, some essential context for the important video below that’s presented in Russian.  The following intel was submitted to SOTN along with the video.

“Ukrainian special forces in Mariupol surrendered to the Russian troops! They do not want to protect the NATO officers who are trapped in Mariupol.

Azovstal factory*, the location of NATO’s main secret headquarters in Mariupol and BIOWEAPON LAB — “PIT-404” — is shown in the video below.

The Russian military knew that NATO and the Armed Forces of Ukraine were ready to attack Donbass, so they launched the “special military operation” two weeks ahead of NATO’s attack date.

President Putin has hard evidence showing that NATO was ready to attack Donbass and the Russian Federation prior to Russia’s defensive invasion that commenced on 24 February 2022. This is really a war being waged against Russia by NATO!”

*The “Azovstal factory” referred to above is actually the Azovstal Iron and Steel Works located in Mariupol, Donetsk in Donbass which is less than 40 miles form the Russian border.  Clearly this heavy duty manufacturing was selected by NATO to launch a biowar against Donbass and Russia because of its excellent geo-strategic location. 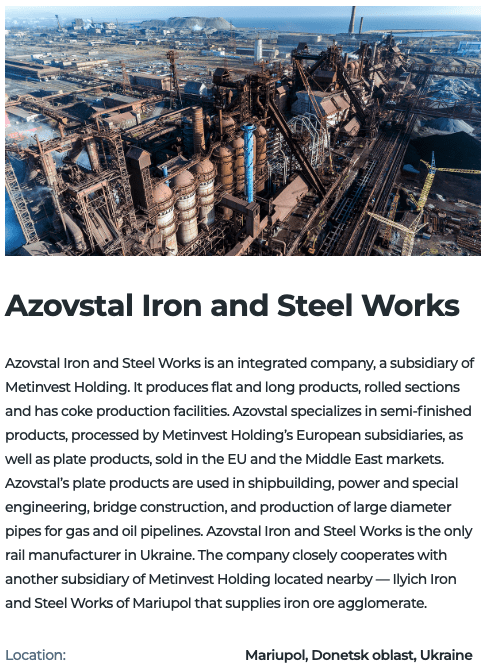 Now that YouTube censored the preceding video right after we posted it, here’s another similar take on the Azovstal criminal enterprise followed by a second video.  It’s well worth watching these Russian presentations just for the telling video footage and revealing photos.