TECHNOLOGICAL SINGULARITY: Now that’s something to be afraid of—VERY AFRAID ! ! !

Top 10 Reasons We Should Fear The Singularity 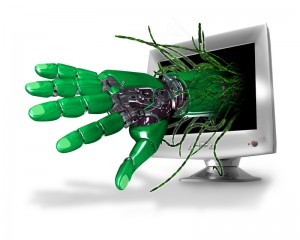 Why do we fear the technological singularity?

Well, let me give you what I believe are the top 10 most popular reasons:

Extinction is by far the most feared as well as the most commonly predicted consequence of the singularity.

The global apocalypse for the human race comes in many flavors but some of the most popular ones are: the supersmart terminator AI’s – a robopocalypse; nanotechnology gone rogue – the so called grey goo scenario, home-made Smart Weapons of Mass Destruction – used by terrorists and nihilists; genetic modifications or mutations – turning us into living-dead zombies; science experiments gone wrong – the Large Hadron Collider creating a black hole that engulfs the planet…

In short, the fear is that, as Bill Joy notoriously put it: The Future Doesn’t Need Us.

Perhaps the second most common reason for fearing the singularity is the potential slavery or subjugation of the entire human race. The argument is pretty straight forward:

Once we have super smart AIs we stop being the smartest entities on this planet. In other words, we have created Gods while remaining mere humans. So, if for whatever reason the machines decide not to exterminate us, then, chances are that, since they will be vastly superior to us, they will enslave us. This can be accomplished in a variety of ways: either explicitly – with us being aware of our bondage, or implicitly – without us realizing it (the Matrix/simulation scenarios).

The third most common fear of the singularity is, of course, World War 3. A Giga War of unprecedented scale, sophistication and efficiency of death and destruction that may be the result of either the clash between the human race and the AIs or between different fractions of humans: e.g. the ArtIlect War of terrans versus cosmists as foreseen by Hugo de Garis. Whatever the case may be, it will likely result in billions of deaths and a collapse or complete eradication of our civilization.

Some have argued that, if we somehow manage to avoid the previous three scenarios, then, we are likely to experience a complete economic collapse:

The complete robotization of our society is likely to lead to overproduction of goods and services. Yet, since it is claimed that most people will lose their jobs to the robots, there will be a global unemployment rate of unprecedented scale which in turn will collapse the demand for those robo-made goods and services. Combine this with a population explosion of 9 or even 10 billion mostly unemployed people who have no means to create income and buy anything, and we are looking at a global economic collapse.

This scenario is a milder version of the slavery/subjugation Matrix option because we are still under the complete control of an all-knowing Artificial Intelligence. The main difference here is that the AI is merely doing what is best for us, rather than what is best for it: we have a benevolent, omnipotent, absolute monarch protecting us from our worst enemies – our fellow human beings and our own selves. It is all done in the name of maximizing security, prosperity and overall happiness for all people across the planet. The only minor negative is a little bit of propaganda and ideological, political or religious brainwashing required to prop up “the cult of the AI,” but that’s OK since it is for our own good.

6. Alienation and Loss of Humanity

Following the “if you can’t beat them, join them” maxim, one way of potentially surviving the singularity is by merging with the machines. This idea – that we can and should improve on what we have been handed down by mother nature, is often referred to as transhumanism. Merging man and machine via biotechnology, molecular nanotechnologies and artificial intelligence, we would increase our cognitive abilities, physical strength, emotional stability and overall health and longevity.

The fear, of course, is that by doing so we are going to lose the very essence of being human – our human nature, our human souls and human identity. Furthermore, at the collective level, the loss of humanity will also mean alienation or loss of community which is to say that the resulting variety of posthuman entities will be so wide apart as to negate any connection whatsoever among different individuals. This in turn will mean that humanity, in fact, did not survive but succumbed to the machine invasion and indeed went extinct.

Our history shows that our environmental destructiveness is in direct proportion of our technological prowess. Once we live in a global society where everything is mass produced by robots, our manufactured civilization will sever the last connection to the natural world. We will lose the very last bit of respect for mother nature:

Why preserve the rain forest if we can create a “better” and “smarter” one? Why care about biodiversity, species’ extinction or environmental degradation if we can revive and mold those for our own purposes or pleasure?

Why care about anything if we are (technological) Gods?!

The ever accelerating process of digitization comes along with a certain loss or even destruction of data. This data can be in the form of history, cultural traditions, dead languages or important scientific information. For example, NASA recently admitted it has lost the ability to recover much of the computer data from some of the Apollo missions and the Moon landings. Thus certain kinds of vitally important and unique knowledge as well as history or cultural traditions are lost forever. To know if we are getting a good deal or not, we must fist quantify the data losses and compare them to the potential gains. Yet, at the break-neck speed we’re moving forward few have time for such calculations.

It seems that we live in an analog universe with infinite resolution – both zooming in and out, as far as we can. The process of digitization captures a mere fraction of it. Just like a compressed .mp3 file captures only a part of the actual musical performance, this process creates symbols which are digital representations of the real thing. The fear is we may end up losing awareness that the digital realm is a realm of symbols – a mere reflection of the true analog universe, ending up in Plato’s Digital Cave of Illusions.

As far as we can tell it seems we live in a universe full of dumb matter. This, of course, makes for a pretty dumb universe too.

However, extrapolating from our own development, it would appear that as time goes by there is a movement from less towards more intelligence in the universe. Thus, given enough time, more and more of our planet and, eventually our universe, is likely to contain and consist of more and more intelligent matter. This process is likely to continue until Moore’s Law collapses and an equilibrium is reached. Such a theoretical arrangement of matter – the best possible configuration of any given amount to achieve a perfectly optimal computing device, is the substrate also known as computronium.

A Matrioshka brain is a hypothetical megastructure of immense computational capacity. Based on the Dyson sphere, the concept derives its name from the Russian Matrioshka doll and is an example of a planet-size solar-powered computer, capturing the entire energy output of a star. To form the Matrioshka brain all planets of the solar system are dismantled and a vast computational device inhabited by uploaded or virtual minds, inconceivably more advanced and complex than us, is created.

So the idea is that eventually, one way or another, all matter in the universe will be smart. All dust will be smart dust, and all resources will be utilized to their optimum computing potential. There will be nothing else left but Matrioshka Brains and/or computronium…

“NASA are idiots. They want to send canned meat to Mars!” Manfred swallows a mouthful of beer, aggressively plonks his glass on the table. “Mars is just dumb mass at the bottom of a gravity well; there isn’t even a biosphere there. They should be working on uploading and solving the nanoassembly conformational problem instead. Then we could turn all the available dumb matter into computronium and use it for processing our thoughts. Long-term, it’s the only way to go. The solar system is a dead loss right now – dumb all over! Just measure the MIPS per milligram. If it isn’t thinking, it isn’t working.” (Accelerando by Charles Stross)

Fear of change and fear of the unkown are deeply embedded in the human psyche: We all want to be comfortable. Not knowing is very, very uncomfortable. Realizing that the coming change is radically unique – both in scale and unpredictibility, is even more discomforting.

When it comes to survival nobody likes surprises. So we take it as a matter of both personal as well as collective security to model and at least roughly foresee the future.

The singularity is a radical change of arguably cosmic proportions which is by definition impossible to model, let alone predict. Thus, there is no surprise it evokes very deep insecurity and primal fear.

The question is: Are you afraid?! Are you not very, very afraid?!