Aung San Suu Kyi is due to appear at the UN’s International Court of Justice in The Hague to defend Myanmar against accusations of genocide.

Thousands of Rohingya were killed and more than 700,000 fled to neighbouring Bangladesh during an army crackdown in the Buddhist-majority country in 2017.

Myanmar has always insisted it was tackling an extremist threat.

The case has been brought by the small African nation of The Gambia.

In the initial three-day hearing at the ICJ, it will ask the court to approve temporary measures to protect the Rohingya.

What are the accusations? 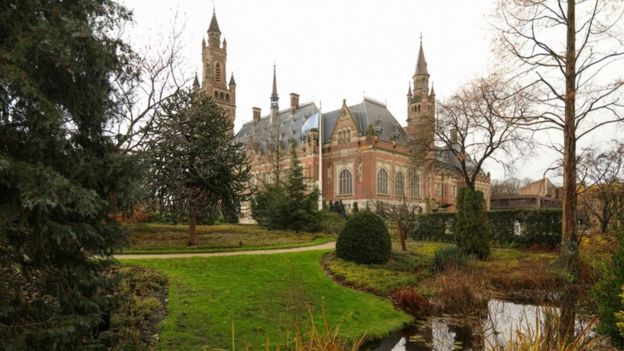 At the start of 2017, there were one million Rohingya in Myanmar (formerly Burma), most living in Rakhine state.

But Myanmar, a mainly Buddhist country, considers them illegal immigrants and denies them citizenship.

The Rohingya have long complained of persecution, and in 2017 the military – the Tatmadaw – launch a massive military operation in Rakhine.

According to the ICJ documents, the military stands accused of “widespread and systematic clearance operations” against the Rohingya, beginning in October 2016 and expanding in August 2017.

It will hear allegations that the clearances were “intended to destroy the Rohingya as a group, in whole or in part”, via mass murder, rape, and setting fire to their buildings “often with inhabitants locked inside”.

UN fact-finding missions have seemingly verified many of the allegations.

In August, a report accused Myanmar soldiers of “routinely and systematically employing rape, gang rape, and other violent and forced sexual acts against women, girls, boys, men and transgender people”.

In May, seven Myanmar soldiers jailed for killing 10 Rohingya men and boys were released early from prison.

Myanmar says its military operations targeted Rohingya militants and the military has previously cleared itself of wrong doing.

Who is making the accusations?

The ICJ is the UN’s top court, and cases must be submitted to it by countries. This one is being brought by The Gambia – a small, Muslim-majority country in west Africa.

It has the support of the the 57-member Organisation of Islamic Cooperation (OIC) and a team of international lawyers.

In October, The Gambia’s attorney general and justice minister, Abubacarr M Tambadou, told the BBC he acted after visiting a Rohingya refugee camp in Bangladesh and hearing of killings, rape, and torture.

The case is being brought against Myanmar, not Aung San Suu Kyi.

The ICJ cannot punish individuals in the way that, for example, the International Criminal Court can (separately, the ICC is investigating the Rohingya case).

But the case is, to some extent, about the 1991 Nobel Peace Prize winner herself.

Ms Suu Kyi has been de facto leader of Myanmar since April 2016 – before the alleged genocide began. She does not have control over the army but has been accused by the UN investigator of “complicity” in the military clearances.

“I implore you to open your eyes…and please use your moral authority, before it is too late,” Yanghee Lee said in September.

Ms Suu Kyi announced in November she would personally lead her country’s defence at the Hague – in her role as foreign affairs minister – alongside “prominent international lawyers”. She will address the court on 11 December.

What is the likely outcome of this case?

For now, The Gambia is just asking the court to impose “provisional measures” to protect the Rohingya in Myanmar and elsewhere from further threats or violence. These will be legally binding.

To rule that Myanmar has committed genocide, the court will have to determine that the state acted “with intent to destroy in whole or in part” the Rohingya minority. 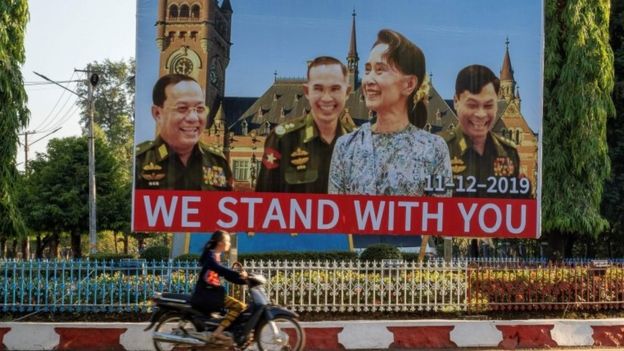 But a final ruling may be years away. Even then the ICJ has no way of enforcing the outcome, but a guilty ruling would cause significant reputational and economic damage to Myanmar.

What is the current situation for the Rohingya?

Hundreds of thousands of Rohingya have fled Myanmar since the military operations began.

As of 30 September, there were 915,000 Rohingya refugees in Bangladesh camps. Almost 80% arrived between August and December 2017, and in March this year, Bangladesh said it would accept no more.

In August, Bangladesh set up a voluntary return scheme – but not a single Rohingya chose to go.

Bangladesh plans to relocate 100,000 refugees to Bhasan Char, a small island in the Bay of Bengal, but some 39 aid agencies and human rights groups have opposed the idea.

In September, the BBC’s Jonathan Head reported that camps have been built on the sites of former Rohingya villages in Myanmar.