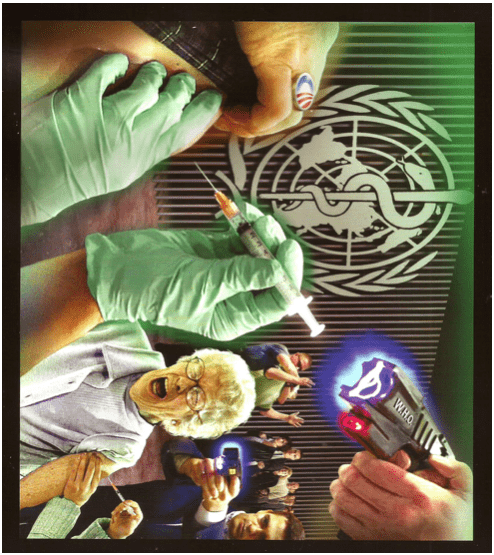 Lyme disease and other bioweapons can manifest in a number of life-threatening ways. This one however, is a hidden epidemic that the U.S. Government and its quasi agencies like the CDC and the NIH have been covering up ever since “Gulf War Syndrome” wiped out almost the entire number of deployed American troops from the first Gulf War.

It is important to understand its history because knowledge of our own history as Americans is power and prevention from making the same mistakes over again. Moreover, it is a blue print for protecting ourselves, knowing who we must protect ourselves from and understanding the vile agenda behind the current plandemic. https://www.bibliotecapleyades.net/sociopolitica2/esp_sociopol_nwo278.htm

That’s because we are presently being quarantined in our homes in order to “manufacture consent” to being vaccinated in the near future with the same type of toxins by the same culprits including people like Bill Gates and George Soros.

The biological weapons that were used on U.S. troops during the first Gulf War were effective because first, American troops were inoculated with “weaponized vaccines,” for diseases like Anthrax and AIDS. These weaponized vaccines came courtesy of the “Vatican Jesuits” and their continuing war on freedom loving American Protestants. See: The diabolical history of the Society of Jesus. https://www.bibliotecapleyades.net/vatican/esp_vatican21.htm

Moreover the entire chain of command from the very top made sure that no one was allowed to use the protective gear that they had been issued for attacks by chemical and or biological weapons and depleted uranium dust even though the alarms that were supposed to go off at the first whiff of any of these agents were going off non-stop on the battlefield during the First Gulf War.

These weapons of mass destruction were made by U.S. companies and given to Saddam Hussein by Donald Rumsfeld. There are a number of interesting back stories and whistle blowers telling them as to how the first Gulf war was manipulated and controlled by Bush Senior and the west with its ultimate goal being the murders of as many American troops and their families as possible for the Vatican, the UN’s Agenda 21 and the City of London’s, “Anglo Saxon Mission”.  https://www.bibliotecapleyades.net/sociopolitica/sociopol_endgame12.htm

It seems that the U.S. and U.K. created the conflict between Iraq and Kuwait for the specific purpose of goading Saddam Hussein into attacking Kuwait for stealing Iraq’s oil using directional drilling from outside into Iraq’s oil fields.  This gave the west the excuse to attack Iraq for invading Kuwait knowing full well that Iraq was able to retaliate with western made biological weapons of mass destruction. Biological weapons are not considered a success unless they can be proven to be contagious.

How much more proof did our government and military need after the first gulf war and “Gulf War Syndrome” destroyed the lives of almost every single one of America’s deployed troops and their families? Is it possible that the whole point of this demonic exercise was to see if the U.S. government could get away with covering up their culpability in the deaths of hundreds of thousands of patriotic Americans and their families?  https://www.bibliotecapleyades.net/sociopolitica/esp_sociopol_depopu28.htm

A sick and dying prison population in Huston Texas and their prison guards, as well as numerous cases of Gulf War Syndrome showing up in the families of dead and dying Gulf War Veterans proved conclusively that the treasonous scheme had been effective.

It had been so effective in fact, that to date, it has wiped out almost the entire Gulf War veteran population and their families, as well as all of the experimented upon prisoners, their prison guards and their families in Huston Texas. They all had been intentionally and maliciously exposed to these manmade bioweapons without their knowledge or consent.  The book “Project Day Lilly by Dr. Garth Nicholson,” tells the sordid tale.

Therefore once those people had died from these “Madmen’s” pathological endeavors and they had no question as to its effectiveness, then what was the purpose of, and who decided to make the monstrous decision to use various ways to infect the entire population of North America and probably the world with these man created biological weapons of mass destruction?

Since weaponized mycoplasma was created by the U.S. Army in the 1950s and in cooperation with the Canadian government it was dumped on the unsuspecting populations of both Canada and the United States, the people of the world have been suffering from hundreds if not thousands of autoimmune diseases.

In recent years frustrated and long-suffering victims of these diseases have donated their ravaged bodies to science for research.  That’s because they refused to remain victims and so that others could benefit from their lives which were destroyed, diminished and cut short by suffering.

What has been found in those mortal vehicles from which the soul has fled, are the same group of toxins, parasites, pathogens, and co-infections found in Lyme disease and Gulf War Syndrome.  Moreover, the powers that be also decided to infect the populations of the world with the fullest toxic load of crystalline mycoplasma fermentens or weaponized cow Brucella, combined with a sheep visna virus, which resulted in the world’s deadliest disease epidemic in the 20th Century, AIDS and Mad Cow Disease.  However, most of the people of the planet who are suffering from autoimmune diseases have not been diagnosed with the pathogenic infections which are the causes of these diseases.

The name of one of those pathogens is Borrelia Burgdorferi with its various strains. It was named after the man who weaponized ticks for the Bio Weapons Lab in Fort Detrick Maryland for the United States Military. They also used various strains of Babesia, Rickettsia, Mycoplasma, Ehrlichia, Bartonella and many more. The Book “Bitten: The Secret History of Lyme Disease and Biological Weapons by science writer Kris Newby, ” tells the rest of the story.

The list of diagnosis’ run the gambit from Rheumatoid Arthritis, Autism, Lupus, Multiple Sclerosis, Scleroderma, Lou Gehrig’s, Schizophrenia, Chronic Fatigue, Fibromyalgia, Poliomyelitis, Encephalitis, Mental Instability and the list goes on.  Most of the above diseases have no cure or known cause according to the hegemonic mutterings of the Petro-pharmaceutical employed minions of the military industrial complex-controlled cabal of western medicine and people like Bill Gates and George Soros.

See the book The New Arthritis Breakthrough by Henry Scammell on what causes R.A. and how it can be treated here; https://www.amazon.com/New-Arthritis-Breakthrough-Improvement-Inflammatory/dp/08

For those who survive, their existence is controlled by their search for answers and a quest for the cessation of the wasting of their bodies, the recovery of their cognitive functions, and an end to the constant pain and debilitating fatigue.

The evil geniuses who make war and diseases for money could care less about the lives that they have ruined, that were dimmed, diminished and destroyed by their diabolical genetically weaponized organisms.

These misogynistic, nihilistic, megalomaniacal, madmen like Gates and Soros, the Jesuits and the minions of Big Pharma, military and civilian intelligence and the alphabet agencies of the federal government all work together to create a legacy of shattered lives and shattered families.

Their forte is destruction.  Their methods run the gambit and include concocted wars, man-made plagues, medical malpractice, massive cover-up by the Fake News and intentional injustice resulting in sickness, suicide, death and abject poverty. Why? So that their parasitic corporations can profit from the suffering created as a result of their malicious labors for the military industrial, anti-terrestrial complex.

These men are the powers behind the ongoing cold and covert war being waged upon the people of the world by the minions of the black nobility of the Holy Roman Empire. They are the entities behind the Nazis, the Fascists, the Zio-Bolsheviks and the Globalists who made a pact with a vile race of anti-terrestrials and the devil before and after WWII

Their seats of power now reside in the UK, Belgium, Rome, Washington D.C. and in New York at the United Nations. Their agenda is to control the world by 2021 or 2030. All of the alphabet agencies created by the illegitimate Trojan horse deep state players of the U.S. government like the CDC, the FDA, the NIH and their globalist counterparts like the WHO and the U.N. are in truth the exact opposite of what they profess to be their purview.

Many of them were supposedly put in place to protect the public while their actual purpose was the private usurpation of the American people’s constitutional rights to health and privacy and a clean and safe environment. From their inception they have actually been giving those who harm the public for the purpose of genocide, resource theft, world control and profit, “plausible deniability” and cover to do further harm instead.  “You will know them by their deadly fruits!”

For the victims of AIDS, Lyme Disease, Gulf War Syndrome, ALS, Multiple Sclerosis, Parkinson’s, Lupus, Alzheimer’s, Mad Cow and other autoimmune diseases, the mystery of what has invaded their bodies and minds lies in the dark corridors of government agencies, patent offices, military laboratories, governmental institutions of health and disease control, Ivy League University research centers and it lurks within the evil minds of psychopathic, egoistic, traitorous, misanthropic, xenophobes and the scientists and Doctors who do their dirty work.

Knowingly infecting your own population with biological weapons and then doing everything in your power to not only cover it up while removing from the market anything that could possibly help the victims with recovery from it is the very definition of treason! See the link below and Lt Colonel Thomas Bearden’s book Oblivion, for information on Gulf War syndrome and the source of what ails so many, as well as the most comprehensive explanation on biowarfare and its solutions of the current age. https://www.bibliotecapleyades.net/scalar_tech/esp_scalarwar03.htm

What will happen when those who they have infected and their families and friends have nothing left to lose even as their voices are being censored and cut from the historical record of atrocities committed by those who proclaim to be their Government and their protectors.

These atrocities cannot go unknown! Before the voices of humanity are silenced forever by the monsters of big tech that are controlled by the planet’s Pharmaceutical companies, we must make the truth of the bio weapons of the military industrial complex’s attacks on their own populations a fact known to every person on the planet!

“The thing that nurtures life and planet Earth is love. Without all of love’s physical connections, life ceases to exist as we know it on our Divine Tear.”

How many kisses have been withheld because of the lies about pandemics from the “powers that rule us?” How many times have we failed to hug a friend or loved one because of our fears of germs?

“How many smiles are now being hidden behind masks so that is impossible to connect with a stranger who might need a smile from another human being?”

How many AIDS patients died not from the so-called virus but from being cut off from the life force which is the love force of the rest of the planet?

Those who create and foment pandemics are the evilest beings that the world has ever suffered from. They should be quarantined from the rest of the planet so that there will never be another “plandemic” going forward.

While these men and their evil tendencies that have inspired them to create perversions of nature are being rewarded, they always seek to blame Mother Nature for their transgressions. However, it is only through trusting Mother Nature, and the God who created us and the world that we inhabit, that humankind can be healed.