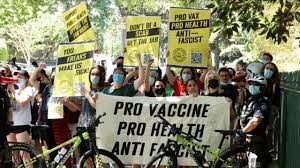 The left-right paradigm was always dubious as a way to describe the Western political dichotomy. Given what modern “Leftism” entails, it’s even more irrelevant now.

Here’s a basic definition of “Leftist” ideology that, once upon a time, characterized many aspects of leftist politics in the early-to-mid-20th century:

“The portion of the political spectrum associated in general with egalitarianism and popular… control of the major institutions of political and economic life… Leftists tend to be hostile to the interests of traditional elites, including the wealthy and members of the aristocracy, and to favour the interests of the working class.”

What a difference a few decades of corporate capture makes!

What sort of egalitarian, hostile-to-elite-interests positions does the modern Western left take?

The liberal coast elites are panicked at the possibility of free speech erupting on social media, or anywhere else. Watch them meltdown over the possibility of – clutch the pearls! – an open speech platform in the digital public square where non-blue-check dissenters don’t get arbitrarily purged for “hatespeech”:

According to notorious white race entrepreneur, Shaun King, who has two white parents but insists he is black to access the BLM gravy train, “free speech” is just code for “muh white supremacy”:

Shaun King, like most modern “leftists,” frequently employs this type of self-serving reductionism – anything to further the narrative:

“A theory in psychology centered on reducing complex phenomena into their most basic parts. It is often contrasted with holism, which is focused on looking at things as a whole.”

Instead of free speech, neoliberals favor an amorphous concept, fermented approximately one week ago in the diseased intestines of some DC think tank, called “equitable speech.”

Does the ‘Left’ protect civil liberties?

Hitherto unprecedented civil liberty crackdowns were most recently pushed by the left, not the right, under the pretense of “stopping the spread” of COVID-19.

The result — in addition to handicapping the economy for years, starving millions, stunting children’s psychological well-being irreparably, and wrecking Americans’ psychological health writ large – was no measurable public health benefit whatsoever, as reported by the National Academies of Sciences::

What egalitarianism! What wondrous liberalism!

And here’s neoliberal hero down under Dr. Kerry Chant telling Australian slaves they’re not allowed to talk to their neighbors anymore, because of COVID:

The most vocal proponents of starting wars to “defend democracy” are on the left, not the right.

Whether it’s Obama using ten times more drones than George Bush to kill poor brown people overseas, the 5-year Russiagate scam to start a war in Eurasia as well as to distract from Hillary Clinton’s epic 2016 defeat (two birds, one stone), or Slay Queen Hillary’s personal project to utterly destroy Libya in retaliation for Gaddafi’s attempts to form a pan-African currency independent of the central bankers’ petrodollar, the “Left” is all war, all the time.

Libya, before and after Hillary liberated it: 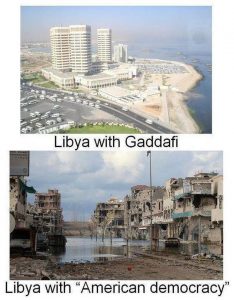 Is the ‘Left’ economically populist?

Liberal media leads the charge to centralize and control cryptocurrency because it challenges central banking monopoly power near and dear to the ruling class heart.

Self-styled “progressive” (another inaccurate and deceptive label) Elizabeth Warren just wants to help the People desperate to escape a sinking dollar by monitoring, regulating, and taxing their cryptocurrency under penalty of law. Because those are our values in a democracy!

No non-taxable, untraceable, non-central-banker money for you, peasant! Skirting taxes is strictly reserved for the oligarchs (AKA political donors).

Is the ‘Left’ anti-corruption?

Don’t be silly! Zombie corpse House Speaker Nancy Pelosi (D-CA) openly defends insider trading on the floor of the People’s House. “This is a free market,” she says in response to questions regarding her profiting illicitly off of privileged information that only Congress members are privy to, which is theoretically necessary to conduct the People’s business effectively.

Perhaps the most succinct summary of the modern ‘Left’ is illustrated by “Antifa” (a truncated version of “anti-fascist”) unironically cheerleading fascistic lockdown, masking, and forced lockdown measures: 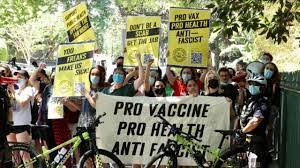 To tie the threads together, the modern ‘Left’ is reduced to a conglomeration of the absolute worst of all political machinations: authoritarian, elite centralized, anti-free speech, economically rapacious, warmongering.

The “Right” political machine, though, is not the inverse of “Leftism” nor should it be exempt from criticism. At the top, it’s staffed by the exact same types of cancerous vultures as found on the Left, albeit with mildly saner social positions in the culture war (they at least don’t advocate transing kindergarteners).

Joe Jarvis and I recently touched on the relevance, or lack thereof, of the left-right paradigm in a wide-ranging discussion posted to YouTube.

The general takeaway from that section of the conversation was that the “Left” and “Right” shorthand is increasingly archaic as a way to describe competing political ideologies in the Brave New World post-COVID.

The real fight is elites vs everyone else. Couching this political conflict in “Left vs Right” terms might do more to obfuscate the nature of competing factions more than it clearly defines them.

The hopeful news here is that a deluge of self-identified leftists who genuinely embrace conventional free speech, anti-authoritarian left values — Jimmy Dore and Glenn Greenwald, just to name two — are fleeing the plantation. And they’re dragging their viewers and readers with them.

We need honest actors on the “Left” to defect to our side, not to write off everyone who embraces that label (however inaccurately) as irredeemable. We need solidarity in the trenches, not mindless partisanship.

-Sick Of It All, Us vs Them

Ben Bartee is a Bangkok-based American journalist with opposable thumbs. Follow his stuff via Armageddon Prose, Substack, Patreon, Gab, and Twitter. Please support his independent operations however you can.