How the rise of fascist corporatism is recklessly driving the Ukraine War, and it’s not just the global MIC. 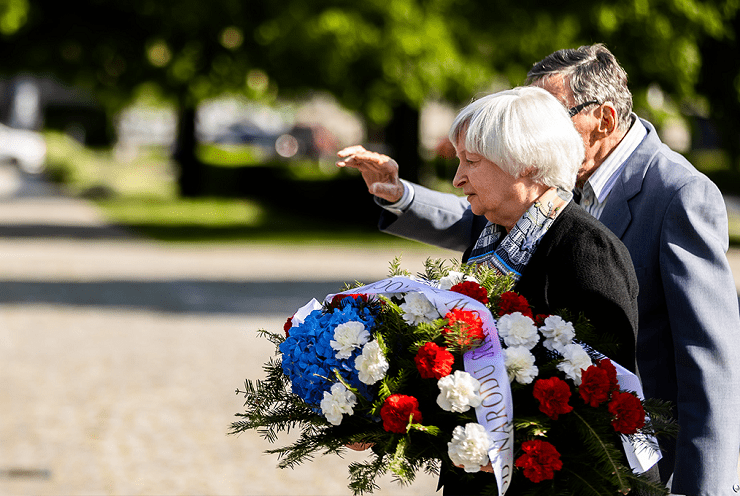 When the Russians first warned of the potential for armed conflict in Ukraine, the world looked on with pandemic blinded eyes. The public turned an unconcerned head, naturally, to still more “Russia” problems framed with the ever present “Putin” headline. Few suspected a more troubling underpinning. Then Russia marched across the border.

The question of “why” still echoes in the bottomless pit of international detente, media, and monetary policies.

Well, the “Nazi makers” who stand behind this Ukraine proxy war are wielding massive profit levers against the Russians, the Chinese, India, and all nations opposed to their order. For instance, all those who wonder at Poland’s renewed lust for killing Russians, news that US Treasury Secretary Janet Yellen in Warsaw is telling.

I’m no economist, but I know there is no such thing as a coincidence. Yellen is in the eastern European country to push forward a new reformative tax regime that would benefit mightily rich nations like France, Germany, and even Poland, perhaps. As I said, I’m not a tax lawyer, but the “OECD Two-Pillar Solution” seems like a sort of bribery to me.

Maybe some of you readers are economists? All analysts like me have to go on corroborative evidence.

Let’s see. The Biden Administration needs Europe to go full-mental on Russia over the Ukraine situation. Okay. That means that Warsaw’s leadership needs to be willing to accept Russian nuclear missiles at any moment. The Poles’ traditional distrust and hatred of Russians must be rekindled, and even old Polish tanks and artillery must be pulled out of mothballs to help Kyiv.

The possibility of a new Polish Empire might even be thrown in? At the very least, Poland’s right-wing leadership needs to toe the line, especially right now. This passage from a National Interest story, helps my premise here:

“Poland remains a frontline NATO member and an important American partner to challenge Russia’s ongoing aggression, reported war crimes, and corruption. However, the Biden administration must focus on Poland not only as a European ally but also as a credible democratic nation. Thus, both the United States and the EU must engage and assist Poland instructively—especially in political, economic, and military realms.”

Alright. Now, the US Treasury Secretary (not her EU counterpart?) being across the border from a brewing World War makes sense. It’s an offer for guaranteed Amazon, Google, Microsoft, and other US multinationals tax profits for Warsaw and the rest! Or, am I wrong?

Then again, perhaps the Ukraine proxy war is designed to leverage NATO countries to simply comply with anything the Biden administration comes up with? I hope you see my logic. Not knowing the ins and outs of Davos meetings, having skipped through both micro and macroeconomics courses in college, all I can attest to is that wheeling and dealing with these people always leads to something really bad for the rest of us.

After all, Russia is ready to launch “technical solutions” should Washington and Brussels convince Finland and Sweden war is the only path. How about the “levers” there?

Finland may be ready to send its citizens below ground into an underground city capable of housing 900,000 people, or about a third more than the city’s entire population. Finland President Sauli Niinisto and Prime Minister Sanna Marin confirmed the other day that their country would seek membership in NATO now.

This would break a treaty with the Soviets at the end of World War 2, which essentially allowed Finland to exist even though the country had sided with Hitler’s Third Reich. The fact that Finland is also one of the most militarized nations in Europe, has not escaped the Russians, either.

The Kremlin response to Finland’s move is one of cool pragmatism, as the Russians say the NATO bid would “definitely” be viewed as a threat. Putin assured the Finns that Russia would be “forced to take reciprocal steps, military-technical and other, to address the resulting threats.” Finland as part of NATO extends Russia’s Europe borders with NATO friendly nations by 2x. So, it’s clear Russia will not back down on this one.

Still, the question of “why” remains for both Sweden and Finland. Why now?

The “levers” here are a bit more complicated than in Poland. But monetary gain and the extension of the existing liberal order are the answers. Finland, the Baltics, and the greater EU have big plans coming up. It all starts with segregating fossil fuel suppliers, then interposing so-called “green alternatives” when gas and oil prices get intolerable.

This story about converting Germany’s LNG terminals to hydrogen hubs clues us. Finland is already ahead of the game in setting up the game against Russia and its gas. This story is about floating LNG production connected to the Baltics, but other moves are in the works to shift profit from Russia to the US and other suppliers.

Then you can expect “new technologies” to follow on with funding from public sources. But the whole Finland affair is more about cutting off Russian oil and gas exports to the west, than anything else. See the port of Primorsk and exports for more on this.

The western alliance is leveraging Finland the easy way, through the threat of pulling back on imports. Finland’s 5.5 million people have been so well off all these decades because 60% of the country’s GDP is tied to international trade. And most of this is with the EU, where Finland is the only nordic country using the Euro.

I won’t get into how Nokia, the country’s biggest enterprise, screwed the pooch and let down the Finnish people. As further evidence of “arm twisting” in Helsinki, this European Commission €2 billion euro partnership just announced, stands as further proof of bribery.

By now, the reader is wondering how all this is going to work out. Well, if NATO does not force the Russians to launch a full-scale military response across a wide NATO-Russia front, it will play out something like this. I will summarize making use of a Yahoo! News quote:

“Germany plans to abandon fossil-fueled power by 2035. But instead of shutting down natural gas infrastructure, it’s speeding up construction of several new terminals that will allow companies to import the planet-warming fuel by ship for decades to come.”

Now, the west-order is planning to first optimize profits from fossil fuels by cordoning off Russia and other energy giants. America and British companies will gain massive profits from partitioning supply, elevated prices, and a new kind of monopoly. Meanwhile, “green alternatives” will be hyped, and ultimately funded by the public to the benefit of western corporations, state owned, and private companies.

Russia will benefit in the short term, but ultimately her natural gas and oil will be all but worthless once replacement technologies and infrastructures are in place. Russia, Iran, and Venezuela will eventually be left holding gas stove energy, and lubricants.

At least, this is an ingenious plan, it seems. The plan for Making America Great Again, probably includes the rest of the world dying in mass, and American citizens funding electric car/home development for Elon Musk. At the end of all this, we become the ultimate consumer/batteries of progress.

I think, perhaps, the elites of this order anticipate Russians, Chinese, Indian, Vietnamese, Brazilian slave laborers making wonder new appliances, for the superior race living to the north and west. Or, I should say, “continuing” to make.

And It’s all done with the smoke of war, economic mirrors, and the clever application of obvious levers.

Phil Butler, is a policy investigator and analyst, a political scientist and expert on Eastern Europe, he’s an author of the recent bestseller “Putin’s Praetorians” and other books. He writes exclusively for the online magazine “New Eastern Outlook”.