Phantom of the Opera-tion: It’s not the corona virus that’s really dangerous, it the fear virus!

The Phantom of the Opera-tion…

From Europe By Karma Singh

The “operation” is to scare people into running away from nothing; to get them to destroy all social bonding for fear of nothing… 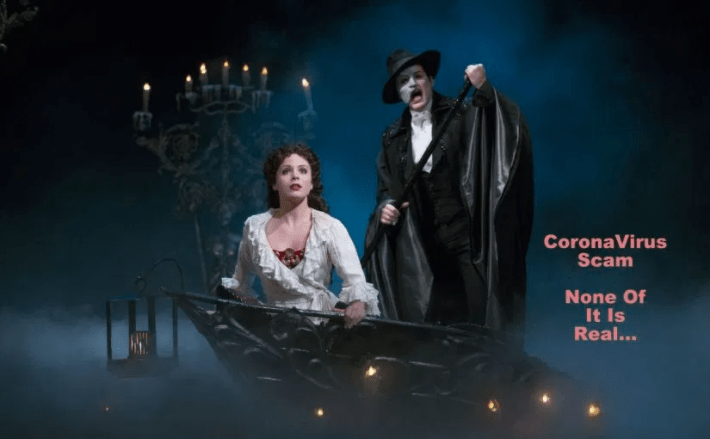 I don’t have a tally of how many times the pharmaceutical cartel has done this over the last century but I do remember eight such events from about 1964 to 2009.

How many more there were is of little interest and, at the time, I, along with most other people simply ignored the propaganda. This wasn’t good enough for the pharmaceutical cartel and the bankers who own it; they want everyone to take every so-called vaccine that they’ve ever manufactured.

The marketing problem that they have is that there is no hard evidence that the viruses which they are supposed to render harmless even exist!

All is guesswork, supposition and assumption: In 2016, Germany’s highest court ruled that these do not qualify as evidence because they are not demonstrable facts. There is a further problem in that all epidemiological evidence shows uniformly that the only discernible effect of vaccination is to spread and to cause disease (see https://www.tprip.com ). As it became clear that ever more people were becoming aware of this, it was clear to them that they would have to do something enormous or lose billions in profit.

Coronadaisy is their chosen method. Hereby, we must note a few things:-

1. There are over 1100 different putative Corona “viruses”.
2. The Corona tests will give a positive reading no matter which one it “finds”, i.e.  the so-called test is NOT specific for COVID-19.
3. Coronadaisy is one of the many known ‘flu variants; it is known to be an especially mild ‘flu form.
4. The Corona “viruses” have been well-known for at least ten years.
5. Every year, between 290.000 and 500.000 aged and infirm people die whilst going through the ‘flu process, i.e. their systems were on the verge of collapse with other illnesses and the ‘flu was just too much.
6. Even including the false figures dictated by the pharmaceutical cartel and the satanic sect which controls it (also via the satanic temple in the Robert Koch Institute in Berlin) the present (16.00 on Thursday 9th April) death toll is only 229.381 – less than half that for a bad ‘flu year.
7. ‘Flu is not an illness but a natural detoxification process. This is why you feel lighter and look younger following a bout of ‘flu.
8. The so-called “viruses” are wastes which your own body produces as part of the detoxification process, i.e. they do NOT come from outside of you.

Colds and ‘flu are the most common minor maladies right around the world. Each season brings forth a slightly different “virus” as, each Winter, different problems are being resolved. This makes ‘flu an ideal scaremongering tool because it gives the possibility to claim that “this year’s variant” is a brand new super-deadly one.

(The apparent contradiction to this, “Spanish ‘Flu” which did kill possibly as many as 50 million people, was, as Dr. John Bergman has made very clear, a direct result of mass-vaccination…

…i.e. it was the vaccines and not ‘flu which killed 50 million people! It was merely subsequently re-named ‘flu in order to protect the guilty.

It has never taken long for previous such attempts to fall flat on their faces as people quickly see that the prophesied death toll simply doesn’t happen. You may remember SARS which was going to kill millions but, even after the figures were massaged, it barely reached eight thousand (0.00011% of the world’s population).

The boyo who cried “Wolf”.

Faced with this constant failure and the probability that people in general would soon cease to believe their lies, they decided to blow the whole wad and organised a dose of mass-hysteria using all of the politicians which they had, over the years, purchased to push their programme.

The peak of their success has now passed as more and more real scientists and real journalists are succeeding in getting the truth into the public forum. Only this week, senior health officials in Germany disclosed that the ‘flu death rate this season stands at 0.3% – less than one third of the typical toll. Even politicians are beginning to question whether the “emergency” is real or imaginary.

Faced with steadily falling numbers of ill and dead and hundreds of empty hospitals, the only tool which they have left is fear. It is this which they are pushing with maximum effort in the attempt to maintain their programme aimed at mass-poverty by destroying the backbone of the economy.

It is the only thing which a human can experience which has no existence! Fear is just a hole in your energy fields. There is nothing in it and nothing can enter it other than you, yourself. As soon as you do so, the fear is gone as the hole is no longer there.

This week I recorded a new healing transmission which will gently assist you to enter the hole and thus eliminate fear.

The antidote for fear is peace.

This is also built into the transmission.

This video is the introduction and explanation

This video is the transmission itself

For more such transmissions, go to www.karmasingh.tv

A few days ago, I made several attempts to upload a comment to the previous article written by Tim himself. I contains the answers to many of the questions posed by other commentators but, each time I uploded it, it was immediately shunted into the spam folder. I can’t get it out of there and so I have added it here:-

A lot of questions here, especially asking for sources.

Now, I don’t know much about PCRs but everyone who does know doesn’t like them. I first came across them in a newsletter from Jon Rappoport which I copied in full (with his blessing) in my newsletter of the 14thFeb:-
https://www.harmonyenergyconsultants.com/web/en/pneumonia-not-coronavirus.html#corona
Dr. Kaufmann doesn’t like it either. The first 41 Minutes are the substance of his postulate; the remainder is a question and answer session:-
https://youtu.be/GWRbIIaPV78

The video from the Charite hospital (the largest in the city) in Berlin is here:-
https://www.bitchute.com/video/XxeGUIBPVleu/?mc_cid=eb62c24f85&mc_eid=bcd50dcd57
The English sub-titles are quite good at the beginning but are very lackadaisical later on when the Austrian doctor is speaking.

How reliable are they? We have our own contacts into many hospitals and all report the same thing – staff being put on short-time working and being sent home because they have nothing to do.

There is no positive Corona test, Will because there is no single organism.
These things called “viruses” are actually waste products from your body’s natural cell regeneration processes. Each “COVID-19” will, therefore, be unique to the person from whom it was collected. A DNA test tells you nothing meaningful in respect of pandemic or not.

How does “infection” actually happen? I go into this in great detail in my book Tyrannosaurus Pharmaceuticus R.I.P. https://www.tprip.com

Please note that, as of this Monday 6th April, Deutsche Post are refusing to deliver printed books and DVDs to N. American addresses. The e-book download versions of all of my book – www.karmabooks.co.uk continue to be deliverable.

Yesterday evening, 9th April, in ZDF (one of the two state run television stations in Germany) in a discussion programme called “Lanz”, two of the top german medical experts on Coronawotsit were permitted to state the truth:-

Dr. Püschel, chief pathologist for Hamburg stated that there have, to date, been no deaths from Corona “virus”. All of the deaths claimed by the Robert Koch Institute (which is run by the same satanic cult behind the Nazi party) were caused by other serious illnesses which the RKI ordered be re-labelled “corona virus” in order to give some semblance of veracity to the pandemic claims.

Prof. Streek, a virologist from Heinsberg (where one of the first German 5G installations was erected early last year) stated that he has, so far, found no Coronavirus in any of those who purportedly died of it. The German government has responded to this by prohibiting all autopsies “as this would cause a massive release of this “deadly virus” (which nobody can find) into the area.”

Prof. Streek goes on to state that, overall, the ‘flu death rate in Germany at 0.3%, is way, way below a typical year where it is usually one per cent. In short: Coronaflu is one of the safest of the ‘flu variants (sic).