Coronavirus: Is social distancing an oxymoron in India? 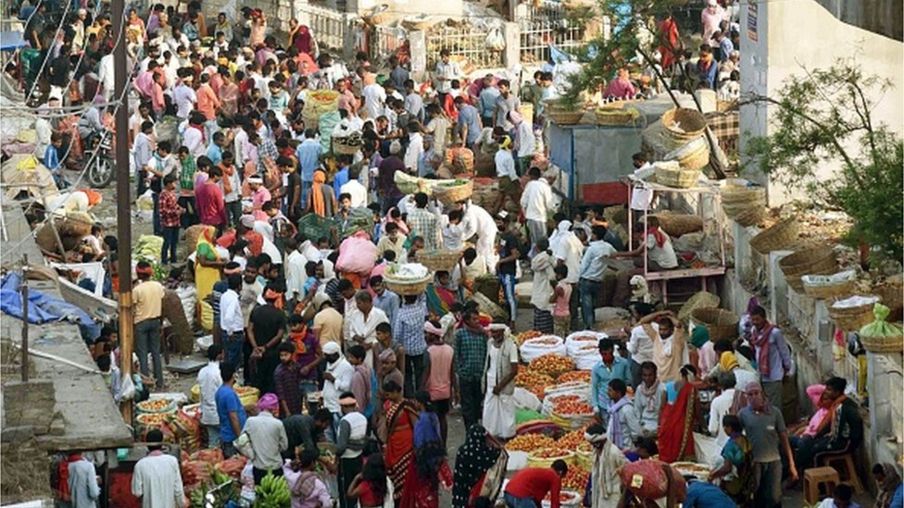 GETTY IMAGES – Three weeks into the lockdown, this vegetable market in Patna was still crowded

Health experts and governments across the world have been advising people to practice social distancing to halt the spread of the deadly coronavirus.

In India too, we are constantly being told to avoid physical contact and maintain a distance of at least one metre from others.

Prime Minister Narendra Modi himself has talked about it repeatedly in his nationally-televised addresses to the citizens.

“If you want to tame the spread of the coronavirus, the only way to do it is to break the cycle of transmission by practicing social distancing,” he said.

Millions of people are following his advice, but what transpires every now and then makes one wonder if social distancing is an oxymoron in India.

Some of the violations are, of course, driven by despair – for instance, when thousands of migrant workers turn up at the railway or bus station in the hope that they may be able to find some transport to return home.

India has been under a complete lockdown for the past month, leaving millions of migrant workers stranded in towns and cities, far away from home, with no jobs or money.

So, every time they hear rumours that some transport services maybe resumed, crowds have gathered, defying laws on social distancing, at considerable risk to themselves and others.

Then, there’s also the matter of overcrowding. India is a country with more than 1.3 billion people and has a population density of 464 per sq km – in China, the world’s most populous country, it is 153 and in the US it’s just 36. 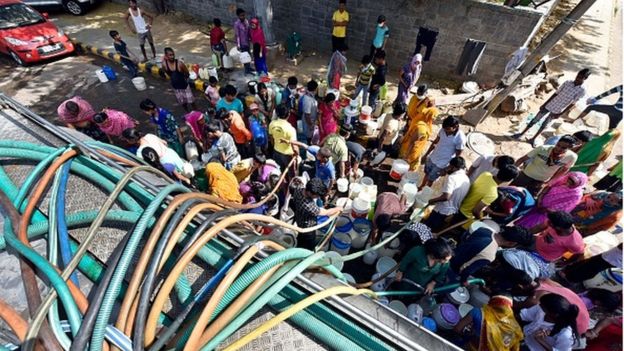 An average Indian family has five members and 40% of all homes – that is, 100 million homes – have only one room.

“In India, it’s a privilege to be able to maintain social distancing when most of the population is huddled up five to six in a room,” Kiran Lamba Jha, assistant professor of sociology at Kanpur’s CSJM university, told the BBC.

“Social distancing is only possible if you have a large house,” she said.

Despair and overcrowding can be legitimate reasons, but in the past month, Indians have also displayed behaviour that defies reason and makes me wonder if we even understand the concept of social distancing?

For instance, just before the countrywide lockdown began, Mr Modi called upon Indians to observe a day-long self-imposed public curfew on 22 March.

He said coronavirus had no cure yet and the only way to stay safe was to stay home.

And to thank those who couldn’t stay home – like doctors and nurses and other emergency workers – the prime minister suggested that people come out in their balconies or stand in their doorways at 5pm and clap, beat metal plates, or ring bells for five minutes.

People across India responded enthusiastically by participating in the curfew.

But at 5pm, all the good work of the day was undone – large groups of people came out onto the streets in many cities and towns, blowing conch shells, beating drums, clapping and clanging vessels. 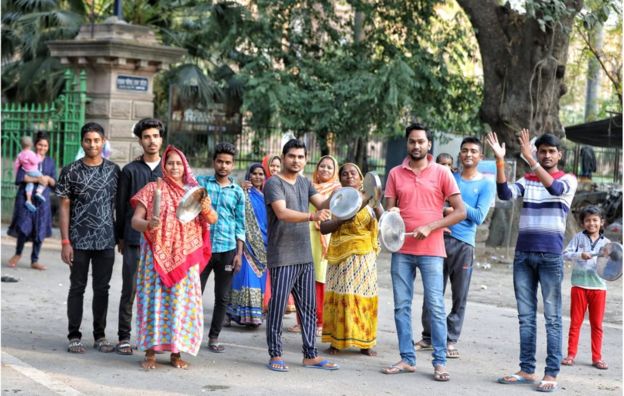 GETTY IMAGES – Groups of people came out onto the streets in many cities and towns, clapping and clanging vessels

Many took selfies and shouted “go corona, go” as processions meandered through the lanes and bylanes.

Incredibly, some of these processions were led by senior government officials and top policemen – the men who were meant to be educating people about social distancing and enforcing it.

Similar scenes were reported a couple of weeks later when Mr Modi called on the people to light candles and clay lamps to show solidarity with those affected by Covid-19.

By then, India was in the midst of a strict 21-day lockdown, but at many places, crowds poured out onto the streets, chanting slogans and setting off fireworks.

“The events were good at one level because by participating in them, people were trying to express social solidarity in times of crisis,” says Prof Lamba Jha. “But then people forgot that corona was still around,” she laughs.

Because of the coronavirus, she says, we find ourselves in a kind of situation that’s not normal, but distancing to many Indians is an alien concept.

“We say man is a social animal and Indians are more social than others. We don’t like being alone, we have large families, we have lots of friends and neighbours, we thrive on social connectedness.”

In places like the capital, Delhi, and across larger cities and towns though, police are working to enforce it strictly. In my local market, shops have circles drawn in chalk outside to ensure shoppers stand one-metre apart at all times. 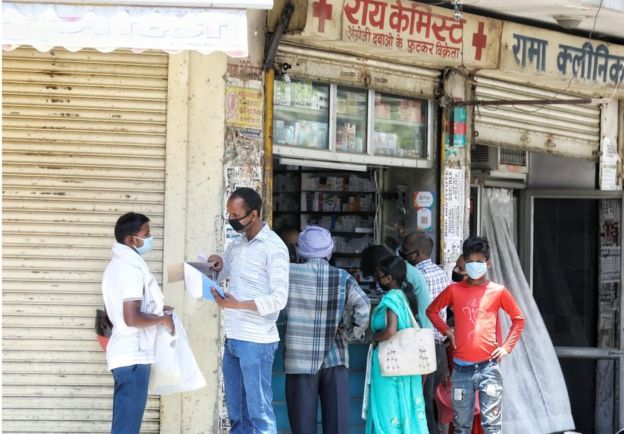 There have been exceptions though – like when slum-dwellers mob a water tanker in a parched Delhi colony or when hundreds of poor and homeless clamour for food being distributed by charities in Noida, a Delhi suburb.

And in rural India, where 69% of the country’s population lives, I hear social distancing is not doing well at all.

Amarnath Tewary, a senior journalist in the northern state of Bihar, says social distancing is an “urban phenomenon”.

In villages, people often live as a community, many families share a single water source and work together on farms and fields. In local markets, shoppers often stand within touching distance of each other, he says.

Prof Lamba Jha says that’s because many villagers still think Covid-19 is a rich man’s disease because it came to India from abroad.

“They feel cases of coronavirus are only in the cities, everything is fine in the villages.

“They can’t understand what the fuss is about.”