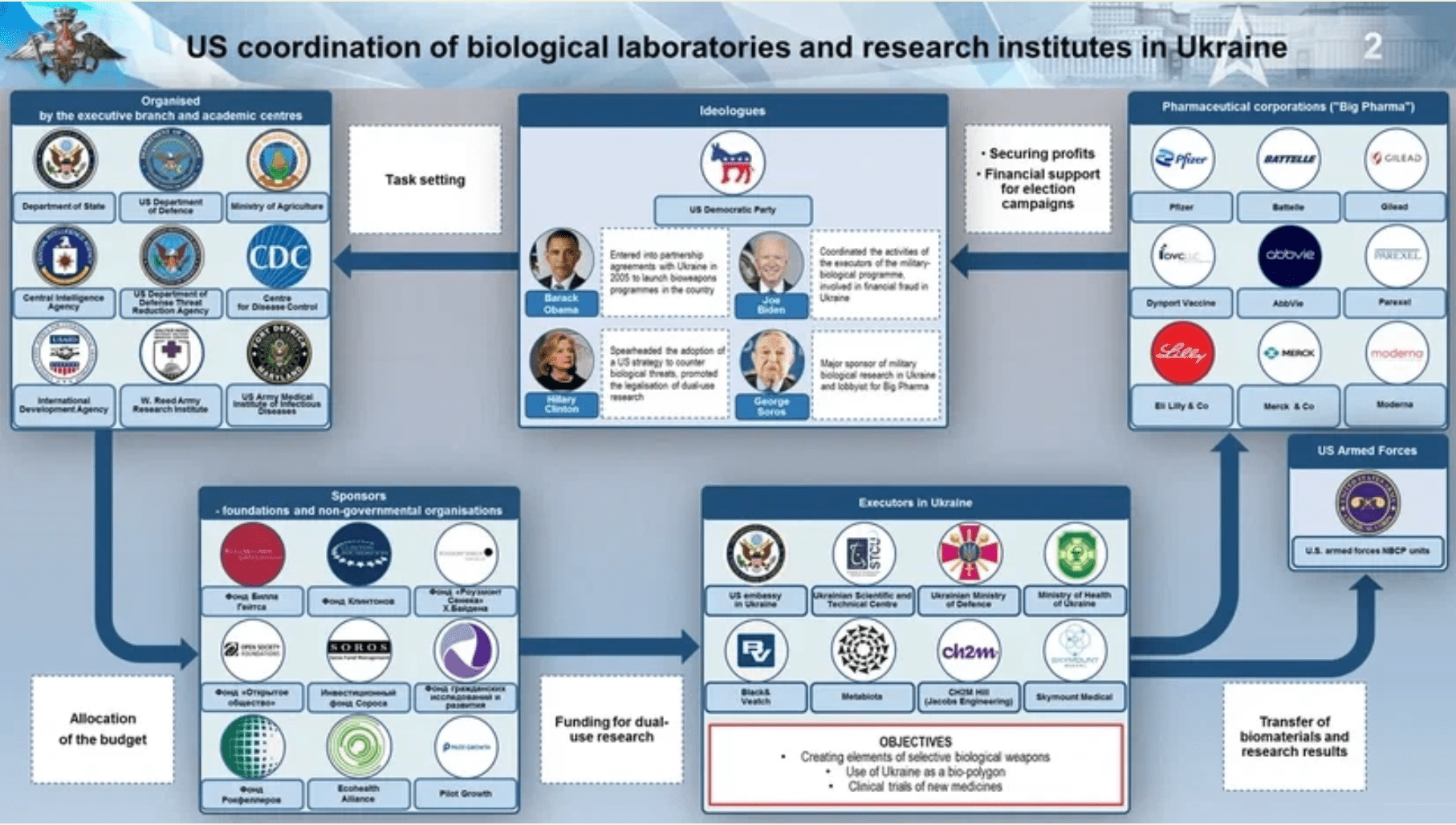 The next story may possibly be the most significant news I’ve ever reported, and I don’t think I’m exaggerating. The news is that Deputy Chairwoman of the Russian State Duma (congress) Irina Yarovaya gave an update yesterday on Russia’s official investigation into US Biolabs in Ukraine.

What the Russians are saying isn’t pretty. And they claim to have a mountain of evidence. So far, the U.S. has not deigned to respond to any of the deadly serious allegations.

Remember that back in May, the Russians presented evidence to the U.N. Security Council arguing that the U.S. had been performing illegal bioweapons development — AND TESTING — in Ukraine, including accusing the last three Democrat administrations of working with George Soros, Bill Gates, and big pharma to break treaties, develop illegal weapons technology, release bioweapons into Ukraine, test the weapons on soldiers and mental patients, and — most significantly — infect the Russian people and crops.

Specifically, the Russians identified a surprising list of key individuals and groups alleged to have masterminded the conspiracy:

I am not making that up. That’s what the Russians are saying. A remarkable diagram shows all the alleged players that goes far beyond those named above, and includes Pfizer, the Bill and Melinda Gates Foundation, and others.

The Russians accused the top Democrats of facilitating the illegal research for military purposes in league with big pharma, which was brought in whenever there were tests or leaks, to develop lucrative treatments for the new diseases. In return, argued the Russians, big pharma funneled massive campaign contributions back to Democrats, making a sinister and demonic viral feedback loop.

U.S. corporate media — which furiously leapt on the made-up Russiagate story and for weeks breathlessly reported unsubstantiated allegations against Brett Kavenaugh — completely ignored the Russians’ incredibly serious accusations, fully discounting them as “Russian misinformation” to the point it wasn’t even worth mentioning. The Biden Administration even tried to setup a “disinformation governance board” run by a former Zelensky aid, in an apparent effort to screw an even tighter lid onto the news.

Last week, the Russians announced they intend to release a comprehensive report about the U.S. biolabs program soon — before the midterms — and yesterday, as I said, Chairwoman Yarovaya gave a status update to the Russian Duma, or legislature.

“As evidence today, the parliamentary commission may already present the facts that bio laboratories supervised by the Pentagon on the territory of Ukraine did not meet safety criteria. In the current mode of their activity, they posed and pose a colossal threat for citizens of Ukraine and for the whole world.

The facility was not only insecure. Despite the fact that they were working with dangerous viruses and pathogens, there was also a leak. It is quite likely that this explains the growth of epidemics in Ukraine.

But most likely, those who created these laboratories were interested in ensuring [they] were not adequately protected, not only for corruption, but also in order to carry out a live experiment; in this way, to monitor what the reaction from the population would be, what the mortality rate would be, what the consequences would be.”

In other words, the Russians are saying the U.S. has been INTENTIONALLY negligent. The idea would be that the U.S. could deliberately leak pathogens and then hide behind the excuse it was just an accident, because everybody knows the labs are so shoddy. Like when your kids manically swings his arms around acting crazy and then “accidentally” punches his younger brother in the nose. Sorry not sorry!

The Russians’ theory sounds bonkers until you consider Wuhan. Starting in 2018, the State Department published a series of reports about how the biolab at the Wuhan Institute of Virology was so insecure and poorly-run. And then nothing whatever was done about it. Then the covid virus “accidentally” leaked and broke the world. So those State Department reports were retrospectively super helpful, in diverting suspicion that the virus was purposefully leaked.

It was just an accident.

The Russians also alleged that the U.S. culprits are hiding behind “animal research;” further concealing their guilt by genetically grafting human infection capabilities onto existing animal viruses, so they can claim natural origins for the newly-developed bugs. Like with covid. Or monkeypox.

If true, it would explain all the “veterinary reasearch” biolabs the U.S. has been building in all these third-world countries that lack oversight or effective supervision and what regulators there are, will — well — look the other way under the right circumstances. And probably pretty cheaply.

Yarovaya said the result of all this intentional negligence has been “unforeseen situations all over the world.” She fingered the U.S. for the novel monkeypox outbreak. “Everything related to coronavirus, monkey pox, should be searched in the test tubes of American laboratories,” she said.

By a totally random coincidence, the very same Wuhan Institute of Virology where covid was developed was also experimenting with monkeypox:

A 2017 article published in the Journal of Health Security is titled, “Taiwan’s Public Health National Laboratory System: Success in Influenza Diagnosis and Surveillance.” It includes some interesting statistics.

Taiwan has about the same population as the State of Florida. But for some reason, the article reported that the country has “1,251 microbiological laboratories in a tiered system that addresses medical, agricultural, food, and environmental needs.” That seems like a lot of biolabs; it would be the equivalent of 18 biolabs in every county in Florida.

According to the article, Taiwan has “a national BSL-4 laboratory in northern Taiwan affiliated with the National Defense Medical Center.” In other words, it’s military. It also has 31 “national labs,” which “serve as reference centers for the fields of virology, bacteriology, parasitology, mycology, and vector biology.”

Vector biology is the study of carriers, like ticks and mosquitos, that can transmit infectious diseases to humans.

In her most recent Substack letter, doctor Naomi Wolfe — who has led the effort to crowdsource the Pfizer document dump review — claims to have discovered information showing that Pfizer is partly owned by the Chinese Communist Party, or at least that the CCP owns a major manufacturer of the mRNA drug.

Wolfe says her project has convinced her that we are already at war and just don’t realize it yet. Facing the Beast – Outspoken with Dr Naomi Wolf.

🔥 All these allegations — completely ignored by corporate media — are incredibly serious. The Russians are accusing the U.S. of a biological weapons of mass destruction attack. It has long been the official policy of the U.S. that a bioweapons attack is equivalent to a nuclear attack, and would justify a nuclear response.

It doesn’t matter whether they’re right. The Russians appear to believe they are legally justified in retaliating against the U.S. using weapons of mass destruction. And they’re building the case using a lot of shady stuff that the U.S. and its deep-state corporate allies have been up to.

But perpetrators, whoever they are, would almost certainly risk nuclear war to protect their secrets if only half of what the Russians are saying is true. So, wittingly or not, we are all involved in a deadly game of nuclear chicken.

And our driver is Joe Biden.

In any event, it is looking even more likely that Naomi Wolfe is right, that the Third World War already started over two years ago in January 2020, with covid. We all thought WW3 would be fought with global thermonuclear war. But that style of warfare is simply too expensive, so warfare has obviously evolved, or mutated. This World War’s arsenal actually appears to be constructed out of biological weapons — and their mandated therapeutics.