The FBI Illegally Entrapped Gen. Flynn Because of His Pedogate Tweet Accusing HRC 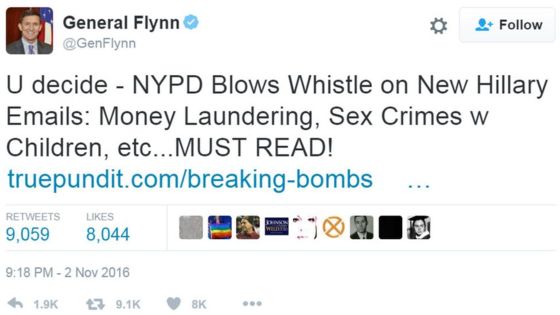 Next, what follows are the details of the FBI’s criminal conspiracy to unlawfully execute a perjury trap against Gen. Flynn in retribution for his whistleblowing.

Update (2030ET): Are we finally going to see some consequences for a deep state lackey?

Shortly after the post below was completed, US Congresswoman Elise Stefanik tweeted the following:

…Comey smugly responds “I sent them.”

Here is the clip:

Will Comey do time?

Moreover, the Department of Justice release 11 more pages of documents Wednesday afternoon, according to Powell.

“What is especially terrifying is that without the integrity of Attorney General Bill Barr and U.S. Attorney Jensen, we still would not have this clear exculpatory information as Mr. Van Grack and the prosecutors have opposed every request we have made,” said Powell.

It appears, based on the notes and emails that the Department of Justice was determined at the time to prosecute Flynn, regardless of what they found, Powell said.

“The FBI pre-planned a deliberate attack on Gen. Flynn and willfully chose to ignore mention of Section 1001 in the interview despite full knowledge of that practice,” Powell said in a statement.

“The FBI planned it as a perjury trap at best and in so doing put it in writing stating ‘what is our goal? Truth/ Admission or to get him to lie so we can prosecute him or get him fired.”

The documents, reviewed and obtained by SaraACarter.com, reveal that senior FBI officials discussed strategies for targeting and setting up Flynn, prior to interviewing him at the White House on Jan. 24, 2017. It was that interview at the White House with former FBI Special Agent Peter Strzok and FBI Special Agent Joe Pientka that led Flynn, now 61, to plead guilty after months of pressure by prosecutors, financial strain and threats to prosecute his son.

Powell filed a motion earlier this year to withdraw Flynn’s guilty plea and to dismiss his case for egregious government misconduct. Flynn pleaded guilty in December 2017, under duress by government prosecutors, to lying to investigators about his conversations with Russian diplomat Sergey Kislyak about sanctions on Russia. This January, however, he withdrew his guilty plea in the U.S. District Court in Washington, D.C. He stated that he was “innocent of this crime” and was coerced by the FBI and prosecutors under threats that would charge his son with a crime. He filed to withdraw his guilty plea after DOJ prosecutors went back on their word and asked the judge to sentence Flynn to up to six months in prison, accusing him of not cooperating in another case against his former partner. Then prosecutors backtracked and said probation would be fine but by then Powell, his attorney, had already filed to withdraw his guilty plea.

The documents reveal that prior to the interview with Flynn in January, 2017 the FBI had already come to the conclusion that Flynn was guilty and beyond that the officials were working together to see how best to corner the 33-year military veteran and former head of the Defense Intelligence Agency. The bureau deliberately chose not to show him the evidence of his phone conversation to help him in his recollection of events, which is standard procedure. Even stranger, the agents that interviewed Flynn later admitted that they didn’t believe he lied during the interview with them.

Powell told this reporter last week that the documents produced by the government are “stunning Brady evidence’ proving Flynn was deliberately set up and framed by corrupt agents at the top of the FBI to target President Trump.

She noted earlier this week in her motion that the evidence “also defeats any argument that the interview of Mr. Flynn on January 24 was material to any ‘investigation.’ The government has deliberately suppressed this evidence from the inception of this prosecution—knowing there was no crime by Mr. Flynn.”

Powell told this reporter Wednesday that the order by Sullivan to unseal the documents in Exhibit 3 in the supplement to Flynn’s motion to dismiss for egregious government conduct is exposing the truth to the public. She said it’s “easy to see that he was set up and that Mr. Flynn was the insurance policy for the FBI.” Powell’s reference to the ‘insurance policy,’ is based on one of the thousands of texts exchanged by former FBI lawyer Lisa Page and her then-lover former FBI Special Agent Peter Strzok.

In an Aug. 15, 2016, text from Strzok to Page he states, “I want to believe the path you threw out for consideration in Andy’s (former Deputy Director Andrew McCabe) office — that there’s no way he gets elected — but I’m afraid we can’t take that risk. It’s like an insurance policy in the unlikely event you die before 40.”

The new documents were turned over to Powell, by U.S. Attorney Timothy Shea. They were discovered after an extensive review by the attorneys appointed by U.S. Attorney General William Barr to review Flynn’s case, which includes U.S. Attorney of St. Louis, Jeff Jensen.

In one of the emails dated Jan. 23, 2017, FBI lawyer Lisa Page, who at the time was having an affair with Strzok and who worked closely with him on the case discussed the charges the bureau would bring on Flynn before the actual interview at the White House took place. Those email exchanges were prepared for former FBI Deputy Director Andrew McCabe, who was fired by the DOJ for lying multiple times to investigators with DOJ Inspector General Michael Horowitz’s office.

Former FBI Director James Comey, who was fired by President Trump for his conduct, revealed during an interview with Nicolle Wallace last year that he sent the FBI agents to interview Flynn at the White House under circumstances he would have never done to another administration.

In the Jan 23, email Page asks Strzok the day before he interviews Flynn at the White House:

“I have a question for you. Could the admonition re 1001 be given at the beginning at the interview? Or does it have to come following a statement which agents believe to be false? Does the policy speak to that? (I feel bad that I don’t know this but I don’t remember ever having to do this! Plus I’ve only charged it once in the context of lying to a federal probation officer). It seems to be if the former, then it would be an easy way to just casually slip that in.

“Of course as you know sir, federal law makes it a crime to…”

I haven’t read the policy lately, but if I recall correctly, you can say it at any time. I’m 90 percent sure about that, but I can check in the am.

In the motion filed earlier this week, Powell stated “since August 2016 at the latest, partisan FBI and DOJ leaders conspired to destroy Mr. Flynn. These documents show in their own handwriting and emails that they intended either to create an offense they could prosecute or at least get him fired. Then came the incredible malfeasance of Mr. Van Grack’s and the SCO’s prosecution despite their knowledge there was no crime by Mr. Flynn.”

Attached to the email is handwritten notes regarding Flynn that are stunning on their face. It is lists of how the agents will guide him in an effort to get him to trip up on his answers during their questioning and what charges they could bring against him.

“If we get him to admit to breaking the Logan Act, give facts to DOJ & have them decide,” state the handwritten notes.

“Or if he initially lies, then we present him (not legible) & he admits it, document for DOJ, & let them decide how to address it.”

The next two points reveal that the agents were concerned about how their interview with Flynn would be perceived saying “if we’re seen as playing games, WH (White House) will be furious.”

“Protect our institution by not playing games,” the last point on the first half of the hand written notes state.

From the handwritten note:

It appears evident from an email from former FBI agent Strzok, who interviewed Flynn at the White House to then FBI General Counsel James Baker, who is no longer with the FBI and was himself under investigation for leaking alleged national security information to the media.

I’m sure he’s thought through these, but for DD’s (referencing Deputy Director Andrew McCabe) consideration about how to answer in advance of his call with Flynn:

Am I in trouble?

Am I the subject of an investigation?

Is it a criminal investigation?

Is it an espionage investigation? Do I need an attorney? Do I need to tell Priebus? The President?

What happens to the information/who will you tell what I tell you? Will you need to interview other people?

How long will this take (depends on his cooperation – I’d plan 45 minutes)? Can we do this over the phone?

I can explain all this right now, I did this, this, this [do you shut him down? Hear him out? Conduct the interview if he starts talking? Do you want another agent/witness standing by in case he starts doing this?]