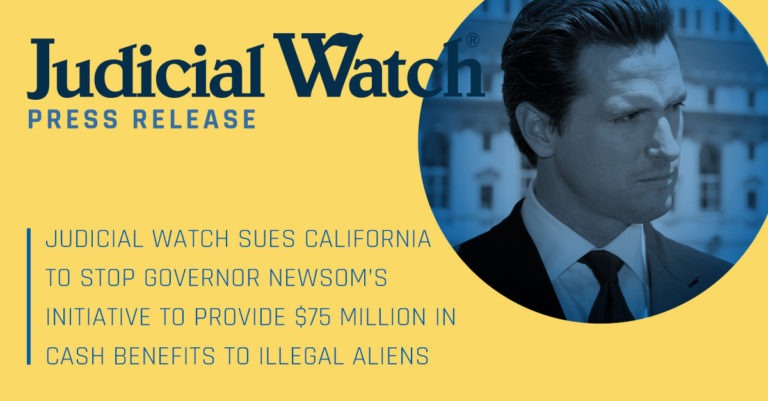 (Washington, DC) – Judicial Watch announced itfiled a lawsuit in the Superior Court of California County of Los Angeles on behalf of two California taxpayers, Robin Crest and Howard Myers, asking the court to stop the state from expending $75 million of taxpayer funds to provide direct cash assistance to unlawfully present aliens (Crest et al. v. Newsom et al. (No. 20STCV16321)). The lawsuit alleges California Governor Gavin Newsom overstepped his authority and violated federal law when, without affirmative state legislative approval, he took executive action to create the “Disaster Relief Assistance for Immigrants Project” and provide cash benefits to illegal aliens who otherwise are ineligible for state or federal insurance or other benefits due to their unlawful presence in the United States.

On April 15, 2020, Governor Newsom announced his new executive initiative to provide direct assistance in the form of cash benefits to illegal aliens. The initiative, known as the “Disaster Relief Fund” or the “Disaster Relief Assistance for Immigrants Project,” would spend $75 million to provide direct cash payments to illegal aliens and cost an estimated additional $4.8 million to administer. Governor Newsom’s executive initiative would provide one-time cash benefits of $500 per adult / $1,000 per household to 150,000 unlawfully present aliens in California. These benefits are not provided to U.S. citizens residing in the state.

Under federal immigration law, 8 U.S.C. § 1621(a), unlawfully present aliens generally are ineligible for State or local public benefits. Section 1621(d) requires a state legislature to enact a state law which affirmatively provides for such benefits for illegal aliens:

A State may provide that an alien who is not lawfully present in the United States is eligible for any State or local public benefit … only through the enactment of a State law … which affirmatively provides for such eligibility.

The lawsuit alleges that the California State Legislature has not enacted any law that affirmatively provides that unlawfully present aliens are eligible for the $75 million of cash public benefits announced by Newsom.

“Governor Newsom has no legal authority on his own to spend state taxpayer money for cash payments to illegal aliens,” said Judicial Watch President Tom Fitton. “The coronavirus challenge doesn’t give politicians a pass to violate the law. If California politicians want to give cash payments to illegal aliens, they must be accountable and transparent, and, as federal law requires, pass a law to do so.”