U.S. Air Force Pilot Confesses How Chemtrailing Is Really Done and Who Does It (Video)

Air Force pilot confesses how chemtrailing is done, who does it — and how they keep it secret 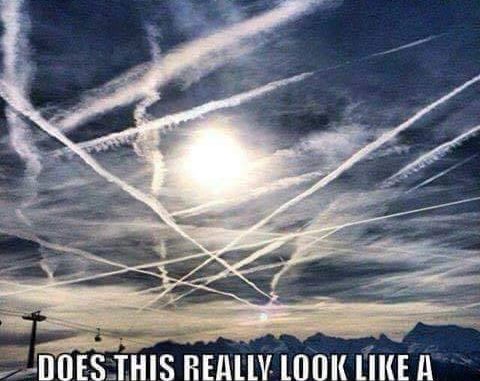 TEXT OF PILOT MESSAGE: December 8, 2014 My cousin, who was fired by our dictator [Obama], just before making [ = being promoted to the rank of] “[rank withheld]”, sent me information given to him by a friend who is still an Air Force pilot.

This pilot is saying that he flies CHEMTRAIL flights! This pilot told my cousin that this global engineering effort goes by the name of “Indigo Skyfold” — at least within the circle of pilots and aviation crews that he works with.

They are told to fly specific routes, and satellite comm links control the aerosol dispersal patterns. He says that they only make course corrections from time to time, and perform the landings and take-offs. Pilots, navigation and maintenance crews are rotated constantly, and only spend about 18 months at one given base. He states that this is to keep pilots and their families from making too many friends, and ending up with “Loose Lips”.

Plus, they also rotate between day and night flights. One base for daytime flights, and one for night.

Each base covers a 250-mile zone, and each fleet (squadron) of planes can cover three States, or an even larger swath of ocean.

They are told to simply do their job and “Shut the F*ck Up!” Their superiors will only tell them. “It’s a matter of national security” and

“Without these flights, our enemy’s newest technological weapons of war could easily penetrate America’s air space at will.

We are dedicated and committed to keeping our allies safe from the same skyward threats. So we extend the arm of protection to those countries who support our efforts [Western and Central Europe/Germany].

Hostile nations are also building atmospheric shields while in the same program trying to explore weaknesses in our ever-developing, air and space-based technologies.”

Sounds more like a PR statement to me. I think this pilot either believes what he is told or he is simply trying to sugarcoat their Genocide Project.

December 08, 2014 My firewall detected multiple intrusion attempts when I googled the Indigo code as well. Zero info to be found on the Internet for this operation. That is unique.

I received a rather lengthy reply, from the chemtrail pilot [edited for better punctuation by me, JdN — and it is shocking how an officer, by definition a graduate of a four-year college, can make so many mistakes…]

First of all, I would like to say — I do not agree with my mission assignments. But what soldier ever truly does? Several of us have considered bucking the ranks, and going AWOL from time to time.

We are kept in the dark when it comes to getting honest answers about what we are really spraying. Should they discover that we, or our families, are actively inquiring about your so-called “chemtrails” term, then, automatic and swift disciplinary actions would be taken.

HAARP and Radar, are two other non-allowed research subjects unless our children are learning about these in [on-base] schools. We cannot educate ourselves or our children through any public tutoring system.

I would not intentionally spray my children or family with toxic aerosols. But, you must know,

80% or better [of chemtrail pilots] do not have any family or children.

Indigo pilots are chosen from the top ranks within the Air Force, Navy and Coast Guard. Most of the pilots are “hardened to humanity,” and could not care less about killing off the unwanted or “leeching” aspects [population elements] of America and the world.

Chemtrails over my tiny town of Ontonagon, Michigan I swear to you — the majority of the pilots are like machines. I call them ‘Tanker Terminators.’

I should not be telling you this, but nearly one-third of all flights are being orchestrated from small un-named islands where newly constructed bases are being built at a rate of eight per year.

On these extremely remote islands, there are HAARP arrays of every possible design with many arrays surrounding these islands within the depths of the ocean itself.

The Navy has developed sophisticated underwater construction technology. That allows fully autonomous robot submersibles to travel great distances, and even manufacture parts for these massive underwater arrays as they progress across the open sea floor.

Every time that you see or hear about military exercises at sea, they are basically there to give support, and to resupply their army of underwater robotic minions.

There is possibly one aquatic robot per plane, and it will soon be double that. You will never be able to Google Earth-search any of this other than an occasional error, in blurring some island bases, or smudging images of underwater arrays. It is impossible to locate all these artifacts. They even paint fake clouds over some of our island installations to keep prying eyes away. I have been shown some of these images by civilian friends. That is the reason I know this.

I completely understand your concern for human safety. But here is the kicker.

We are shown videos in our training of catastrophic destruction to our homeland by very sophisticated weapons, then told that these will be the consequences if we don’t fly.

Our efforts in building a defensive atmospheric weapons shield are the only missions of its kind in the world. We are paid more than any other pilot for our service other than Air Force One pilots, …who make as much or more, and are also kept in a dark, secret world for their protection.

They tell us that secrecy is our protection and not to listen to any public rhetoric.

We all know about the cyber program “Flashpoint”, or FP-03, as it is known within the veteran community.

This program is a Self-Destruct sequence that can be remotely activated from any ground, water, underwater-based, or other air-mobile unit. The signal is encrypted through “three” satellites and cannot be jammed or blocked. At any given moment you could only have 15 seconds to make peace with your God. They tell us that FP exists to keep planes from accidentally going down in heavily populated areas. They can remotely detonate our planes over safe zones.

But in the back of our minds we are pretty sure this is a fail-safe program to keep pilots from turning over assets [like whole jets or the chemtrails-spraying equipment and tanks] to any public, private or civilian authorities. Have you ever seen any member of the crew survive the few crashes that have occurred? Every plane that has gone down was completely destroyed — for a good reason, I’m sure.

We risk our lives in more ways than one every single time that we fly, especially during night flights. They are ordering us to fly at lower and lower altitudes. We feel like massive “Dark Force Empire” crop dusters, and know that one night Bubba, or Billy Joe, will fire their long rifles at us when we spray their moonshine-making operation or pass over an illegal mary jane [ = marijuana] crop.

I know for a fact that some planes have been shot at, and subsequently brought down, by mostly Russian, Chinese and Korean weaponry. But the media will never cover these events as they are not allowed to report on our flights either.

That must be true, for I have yet to see a detailed or in-depth report of our missions on any public venue — other than conspiracy shows and anti-government websites.

I risk everything for disclosing so much information, and you will find very few like me. Even my own flight crew would have me arrested and court-martialed if they knew of this dialogue. That is why I cannot email you directly.

But from what your cousin tells me, you are also risking everything just to get this information out to your colleagues. I salute you, sir, for standing up to the Establishment, and Big Brother.

I would love to go home tomorrow, and not rack up one more single minute of flight time — except in a sweet little Piper Cub!

I miss those beautiful blue skies from my youth [before chemtrail spraying began], and I am ashamed for hazing over that dream. Maybe more of my fellow pilots will read or hear about this, and decide to come forward as well. I only know a small fraction of the larger picture, and they compartmentalize everything. Should I become aware of any [new] significant developments, I will email your cousin. He senses a wavering within the ranks and feels that a kind of mutiny is boiling to the surface of this whole GeoEngineering, this Global White Washing, “if you catch my drift”

My cousin still has friends in high places too. So, he is helping to protect him.

Last word from “pilot” was:

“All pilots on leave are required to report to their CO [Commanding Officer] by Dec.15 for special training operations to qualify for Indigo Phase II flights, expected to be initiated by Jan. 21.”

Those were his words, not the actual Air Force message. He wanted me to stress that. He believes that the focus of their flights will be moved to areas east of California and Texas in order to progress the drought further into the heartland.

JdN: Two-thirds of the US population lives in the green landscapes east of the Mississippi Plus, he feels that a very new, “extremely toxic” chemtrail mix is going to be sprayed, using new technology, that makes these special chemtrails completely invisible. As for this “Atmospheric Shield of Protection,” he doesn’t believe that either.

…..Here a UFO flying over Temuco, Chile seems to be inspecting a chemtrail close-up, maybe even taking samples

Maybe this craft is from one of the good-guy species.