The Hidden Hand Behind the Deep State Coup Against Trump 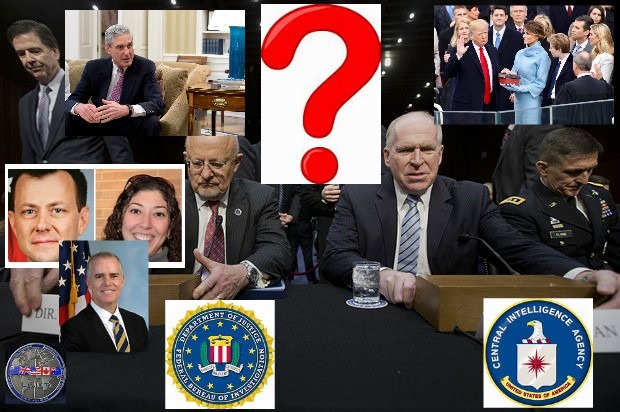 The essence of a coup, which some might refer to as covert action, is the hidden hand.  One does not announce that a foreign power is overthrowing the government and installing a new government.  One pulls strings as if from behind a curtain, making events that are all part of a carefully orchestrated plan appear disconnected, spontaneous and serendipitous.

As I read through the recently released IG report for the second time, as someone with a great deal of experience in military and intelligence matters, I see that hand everywhere.

Per the IG report, a single report is delivered to the FBI in the summer of 2016.  It concerns a meeting between a cooperative contact of a foreign intelligence service and a junior level employee of the Trump campaign, George Papadopoulos.  The report relates what are frankly very amorphous comments by Papadopoulos concerning the Russian government and its alleged possession of information on Hillary Clinton.

On any other day this report would command no attention whatsoever.  The source in question has no track record of any kind with the FBI. Papadopoulos has been employed by the Trump campaign for perhaps 90 days at this point, and there is no reason to believe he has contacts of significance in the Kremlin.

Not on this occasion.  This one report from a foreign intelligence service goes directly to the top of the FBI.  The Director himself, James Comey is briefed.  A full investigation is launched.  Multiple confidential human sources are tasked.  Wiretaps are ordered.  A task force is organized. Crossfire Hurricane is born.

There is a problem, though.  This hand, perhaps because it is controlled by individuals who have made their bones riding desks in Washington, DC and not in the field running actual operations, is clumsy.  The information regarding Papadopoulos provided the needed pretext to start an investigation, but most of the people who will now form the investigative team are not in on the plot.  They will have to be led to the pre-ordained conclusion, so that it appears that they did so without outside interference.

And these investigators have a pesky habit of actually doing their jobs.

Almost immediately these investigators demonstrate that Papadopoulos does not have the access within the Trump campaign necessary for the suspected Russian connections.  If there is a conduit, Papadopoulos cannot be it.

Suddenly, Carter Page is shoved forward as the new focus of the investigation.  His contacts with Russians are long-standing and well-known.  He will serve well as the new target.  Human sources are mobilized.  Wiretaps are ordered.

But, there is another problem.  Those wielding the clumsy hidden hand have forgotten the first rule of real operational personnel.  Never move against a target until you have run “traces.” until you have run the individual’s name through our databases, checked the records and found out what we already know about him.  Maybe the conspirators really don’t know that.  Maybe they just don’t dare do so, because it will mean involving working-level personnel who are not in on the joke.

In any event, they apparently did not run “traces” and as a consequence they clearly do not know that, yes, Mr. Page has extensive Russian contacts and, yes, he has been reporting to “another government agency” for many years on those contacts.  Page is a source.  Our source.

This is problem.  It is a huge, never fully resolved problem for the conspirators.  The “other government agency” sends a formal memo documenting the fact that Page is a source.  The hidden hand tries hiding that.  Any mention of it is removed from applications for FISA warrants, and it is never mentioned in renewal applications either.

But, again, as new FBI personnel, unwitting of the plot are assigned to the investigation they keep doing their jobs.  Already they have determined that the only evidence they can develop is exculpatory.  Already they have established that there is no basis to believe any of the allegations against Donald Trump and his campaign.  Now, they circle back to the issue of Page.

Are they, in effect, focusing investigative resources on a man, Page, who has been cooperating with American intelligence for years?  If so, this is the definition of “crossing lines.”  Inquiries are made.  A second memorandum is sent by the “other government agency.”  This one spells out in excruciating detail Page’s relationship with that agency.

The conspirators, behind their curtain, are now desperate.  What was supposed to be an elegant plot is now in danger of collapsing.  The hand directs crude measures.  An attorney assigned to the investigation materially alters the memorandum inserting words not found in the original and making it appear to say exactly the opposite of what it said, in plain English, originally.  The trail is covered, temporarily, but there is now hard, physical evidence of the conspirators intervention.  The “other government agency” retains the memorandum in its original form, waiting to be discovered by investigators scrutinizing the record at a later date.

This pattern of often clumsy manipulation of the Crossfire Hurricane investigation is everywhere in the record.  It is at the heart, for instance, of the entire Christopher Steele narrative.

Shortly after Crossfire Hurricane is initiated, Steele, a former British intelligence officer, appears to provide a dossier, actually multiple files, concerning alleged connections between Donald Trump and his campaign and the Kremlin.  The dossier also includes a number of gratuitously salacious allegations concerning President Trump and Russian prostitutes, which likely says more about Steele and the way his mind works than anything else.

Steele is working for a law firm employed by Fusion GPS, which is in effect, an extension of Hillary Clinton’s campaign.  He is in Washington, DC frequently.  He has a wide range of contacts at senior levels on multiple continents.  He has had contact of some kind with the FBI for years.

Yet, when Steele appears to deliver his information he chooses to pass that information to a junior FBI agent working for an FBI Legal Attache (Legatt) in a European city and then rely on this individual to get the “intelligence” to the right people.  Why?  Because in the minds of those individuals masterminding this operation this will make the information more “organic.”  It will not arrive on the desks of the special agents working Crossfire Hurricane as if hand delivered.  It will not appear to be too neatly packaged and perhaps arouse suspicion.  It will seem to the people working the investigation, most of whom of necessity can never know what is really happening, that this information was developed in the field and therefore is more credible and to be afforded more weight.

But, again, the hand is clumsy.  Steele is a loose cannon.  He talks to the press.  He discusses his contact with the FBI.  This is discovered.  Formal contact with Steele is shut down.  He is no longer an FBI source.

As with the alteration of the memo from the “other government agency” the conspirators must become more forceful and more visible.  If Steele’s “intelligence” cannot continue to be fed into the investigation there is no plot.  There is no way to lead the investigators in the desired direction and ensure the desired result.  The entire operation is in danger of collapsing.

Again, per the IG report, Bruce Ohr, a senior Department of Justice lawyer with no role of any kind in the investigation, but a wife who works for Fusion GPS, suddenly appears and makes himself a conduit between Steele and the FBI.  Beyond that, in fact, he meets directly with the head of Fusion GPS, Glenn Simpson, obtains at least one thumb drive full of Steele’s reports and ferries those to the FBI. The pipeline is reestablished.

No one in the Department of Justice or FBI has asked Ohr to play this role.  It is, in fact, in direct conflict with his status as an attorney.  Ohr actively hides his actions from his superiors.  His behavior is transparent and without justification.  It is almost certain to attract attention.  This is not all the way covert action should work, but the conspirators, backed into a corner by the FBI’s refusal to meet Steele directly have no choice.  It is the files compiled by Steele, which are the key to their efforts to delegitimize and destroy Donald Trump.

The IG report on the Crossfire Hurricane investigation runs to hundreds of pages, and it contains a wealth of information.  It is the product of what can only have been a massive amount of investigative work by a team of dedicated professionals and is a huge resource for those attempting to understand the origins of the Russian collusion hoax.  Yet, at the same time it misses the essence of what just transpired.  It is like reading a description of the actions and motivations of a troupe of marionettes in a stage play and missing the fact that they are all simply doing what those pulling the strings make them do.

The FBI did not conduct an investigation of Donald Trump and his associates that ultimately proved to be based on false information and continue that investigation long past the time it should have been shut down simply because some people made some errors in judgment or some procedures need to be changed.  That investigation was simply the most visible piece of a deliberate, covert attempt to overthrow the democratic process.  The perpetrators of that crime have yet to be brought to justice and identified.  Let’s hope that happens soon.

Time for the hidden hand to be revealed.