Posted on September 9, 2022 by State of the Nation 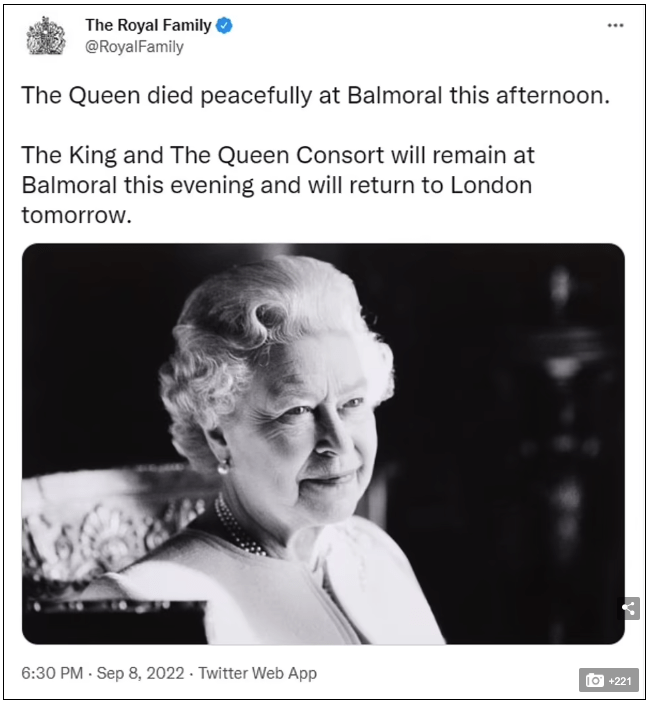 SOTN Editor’s Note: There is no other alternative news network within the Alt Media that had posted more pieces bashing the British Empire, British Parliament, City of London, The Crown Temple, London banksters, Tavistock Institute, MI6/MI5/GCHQ, Royal Institute of International Affairs, Privy Council, Pilgrims Society, Fleet Street, East India Company, the Rothschilds, British Accreditation Registry, Bank of England, London Bullion Market Association, SERCO, Secret Societies such as Order of the Garter, The Golden Dawn & The Fabian Society, every UK prime minster during our lifetime, and, YES, the British Monarchy for the last 12 years than SOTN.  For example, there is this classic SOTN exposé on CROWNgate which has even had its “title” plagiarized it’s so authoritatively incriminating.

However, that does not mean that every leader or highly positioned VIP associated with those institutions is guilty of the heinous crimes and rank corruption perpetrated by those entities, each of which was defined by their extreme predatory capitalism and vicious disregard for humanity.  We believe that the unrivaled Queen Elizabeth II is a case in point.

What is our proof?

First, take a close look at the many photos posted in the following link:

Photos don’t lie.  Different angles of the spirit of the person are always captured by their photographs as is quite true for those posted in the preceding link of Queen Elizabeth.

Simply put, evil Illuminati types don’t present a truly natural smile and genuine glee in the eye unless it’s for real.  Especially when she was younger, it’s quite clear that Elizabeth was an unusually happy and innocent member of the royal family where she evidently experienced a wonderful upbringing from her doting Queen Mother and her loving father George VI.

However, it’s also true that as Elizabeth aged, the pressures of having her entire family held under a media microscope took its toll on her.  Nevertheless, Queen Elizabeth continued to exhibit her extraordinary joie de vivre even in the most stressful of times.  Her abiding intestinal fortitude in the face of so many adversities is quite exemplary by any standard.

Elizabeth also never stopped wearing the most delightful and cheery and bright clothing of any monarch in history.  Dark and evil Illuminatis neither dress in this fashion, nor do they smile in her manner, given all of their vile deeds and nefarious schemes.  How could they smile—REALLY SMILE—like Elizabeth did?!

Which means that Queen Elizabeth was in all likelihood completely sheltered from all the typical palace intrigues and conspiratorial plots as best her handlers could do.  Her entire life was probably firewalled from all the odious machinations having to do with the notorious London banksters going back to the first British East India Company founded in 1600.

KEY POINT: As a very congenial figurehead, Elizabeth really possessed very little monarchal and political power.  Hers was all perceived power … but many in the Alt Media fell for it.  Her extremely positive image was quite purposefully used and misused and abused by the British banksters in the Financial District of the City of London who really run the show.  In point of fact, the Queen of England could not even set foot in that bankster-owned and -operated city-state without an official invitation to do so.  So, Queen Elizabeth really only maintained and managed the monarchy which included the extended royal family, all the royal properties, and all the royal domestic and the international relationships.  That alone requires a herculean effort even for someone so competent as the Queen was.

Really, folks, how could a very innocent young queen of  25-years-old be held accountable for the centuries of crimes against humanity committed by Great Britain’s utterly cold, cruel and cutthroat patriarchal society?!

That’s right—she cannot be held accountable
for any transgressions perpetrated against
humankind except for those that she approved
of or committed herself.

Which brings us to the real punchline in this “unexpected” SOTN commentary:

The most malevolent and malicious evil-doers on planet Earth ALWAYS seek to associate with truly good, happy, wholesome people.  In fact, they are especially proficient at grooming young charismatic leaders who are genuinely honorable and noble in their behavior and bearing.

Which is probably why (particularly as she got older) Elizabeth sometimes had a muted grimace on her face as the many sins of her children came flying out of the closet as so much dirty laundry was aired by the original and most hypercritical mainstream media in the world— the FLEET STREET jackals.

Lastly, we’re not saying that Queen Elizabeth was a saint, or that she was a sinner.  No one, BUT NO ONE, ever knows the heart of another human being.  And, for anyone to presume to know all of her supposed crimes of commission and omission is the absolute height of hubris and arrogance.  However, “by their deeds ye shall know them”, and Elizabeth did a LOT of good deeds all the way around.

KEY POINT: It has often been said that Queen Elizabeth was the real matchmaker between Prince Charles and Lady Diana; for the queen mother of the future king always knows who’s best for her son and for the nation.  Hence, if we are to judge her reign by her choice of Diana, Princess of Wales, then she did a splendid job. (And, Queen Elizabeth cannot be blamed for any schemes that husband Prince Phillip may have cooked up.) 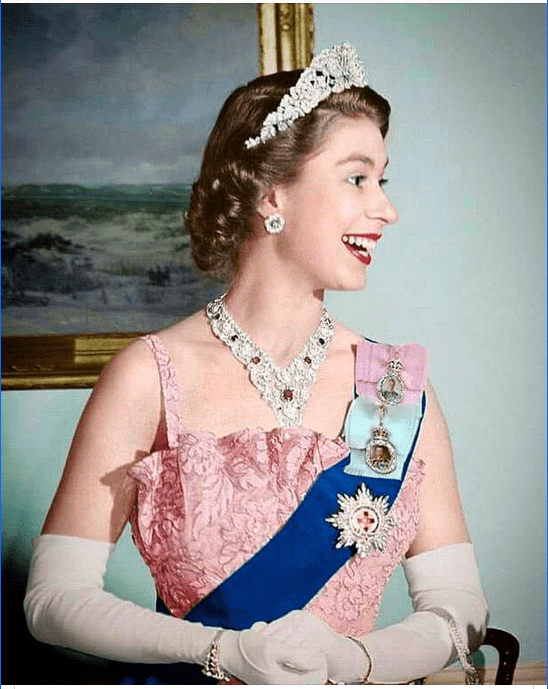 Clearly, Lilibet, as Queen Elizabeth was called during her childhood, was called to service at a very young age.  And, she rose to the occasion of rendering that royal service as well as any other monarch in world history.  Moreover, Elizabeth fulfilled those many royal duties during the most challenging period of the modern era.  In fact, she carried out her responsibilities for 70 long years spending every hour of every day in the full glare of the media’s spotlight.  As follows:

Comment posted by Sitka under an article published by RT.com

“This article is about the life of Queen Elizabeth and not the British Empire. That said I think she is being blamed for the sins of “The India Tea Company” which had nothing to do with her or her reign. I think she had an extraordinary life and everything is well documented. I wonder how well the negative commentators would stand up to such scrutiny if their lives were held up to a microscope as hers was? She was a fascinating person and performed her duties without fail. The Queen had a sense of duty and performed her duties with humility and grace. In WWII when Britain was at a very dark hour the 14 year old monarch gave an address to the children of Britain for support and to give them a sense that “we are all going through this together”. She joined the “Land Girls” with her sister and there are pictures of them changing a tractor tire and working the land to support the war effort at home. At 16 she joined national service and worked for the Red Cross. As the next in line of succession she did not have to do these and many other things but she did them out of a sense of duty and she inspired a down trodden people when they needed it most. It was her efforts that you can go into the streets of any major town in Britain and not have to step over the homeless like you can in America, she gave her time and effort to help the less fortunate. Was she perfect? NO, but there was only one person who was ever perfect on this planet. She exemplified tradition and in the coming days we will see the class and traditions of a nation as they mourn. May God bless the Queen and the British people. To the negative posters may I offer one bit of guidance, while you may disagree with her please refrain from your derision. Follow her example and show some humility and class and just hold your comments for a more appropriate time. History always bring out the truth and I am sure it will show favor to her and prove that you are nasty, hate filled, and a detriment. Heritage, family and blood line made her Queen, but what we have in America is a tyrant and dictator that was imposed on us. The Queen was in public service during her youth, Biden sat beside the pool and let little kids play with his hairy legs. She reigned with grace and went to Parliament once a year to ask help for her people, Biden rules by Executive Orders and force and asks nobody.”

Oh, and by the way, any world leader or head of state who can genuinely share a laugh with Donald Trump — the most hated man EVER by globalists worldwide — has got to be the real deal, YES?!?!?! 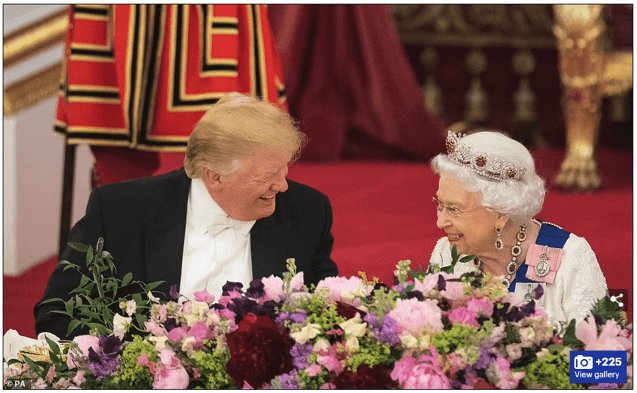 One last VERY relevant point in this arguably delicate and superficial defense of Her Majesty, Queen Elizabeth can be viewed in the following video: Would Biden or Clinton or Soros or Pelosi or Fauci or Gates or Trudeau, etc. ever make a video like this?!

BOTTOM LINE: Someone had to be the Queen of England for the past 70 years.  Aren’t we all glad it was not Hillary Clinton or Nancy Pelosi, Angele Merkel or Liz Truss, Christine Lagarde or Ursula von der Leyen, Jacinda Ardern or Sanna Martin?!  Let’s face it, it was her role to play, and she surely did as good a job as could be expected under the tremendously difficult circumstances.  Exactly what she knew and when she knew it is between Elizabeth and her Creator.

May God Bless The Queen
&
May She Rest In Peace

Special Note: Certainly, as does every key world leader as they mature, Queen Elizabeth came to a critical juncture when she realized that the “Empire On Which The Sun Never Sets” was really built upon the blood and sweat of British subjects the world over.  At that key moment, what could she do?  Turn it all over to her unpredictable son, Charles?  Folks everywhere need to understand that good people can get trapped off by circumstances similar to this.  Then, it is clearly the destiny of that unfortunate individual to soldier on however God best equipped them to do so.

On the much more mundane level of crucial British affairs such as Brexit, what follows is an excellent breakdown of just how important Queen Elizabeth really was to the worldwide sovereignty movement.

Brexit may never have taken place without the support of the patriotic Queen.