To be sure, most of the primarily southern states that are reopening – Georgia, Texas – are still nowhere near full capacity. The NYT argues that this trend suggests the US will see an explosion of new cases as the reopenings immediately ignite a second wave. Fortunately, it seems a wide majority of Americans are still afraid of catching the virus – even if they think the government’s economy-crushing response has been unreasonably heavy handed.

Update (0820ET): As we apparently neglected to mention earlier, US drug giant Pfizer kicked off a major vaccine study on Tuesday, administering the first doses of its experimental treatment to test subjects, as Dr. Gottlieb reminds us.

Before we go, the UK has once again overtaken Italy as the country with the highest official death toll in Europe with 32,000 deaths as Italy’s outbreak slows markedly while the UK’s progress has been somewhat less notable, per Reuters.

Last night, we reported that the number of confirmed coronavirus-linked deaths around the world had surpassed 250,000. The astronomical new milestones reached over the past week – the number of ‘confirmed’ cases topped 3 million while deaths topped a quarter-mil – belie the reality that from Asia, to Europe to the US, restrictions on personal movement and business activity are being rolled back. 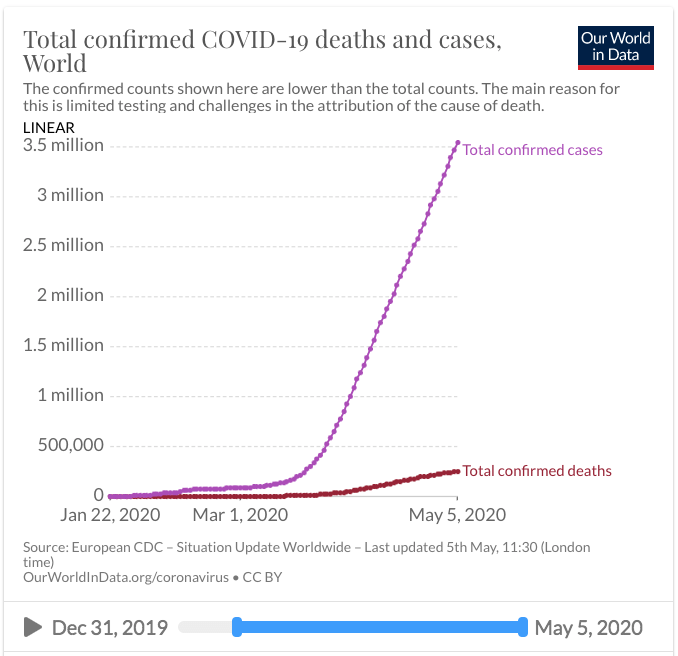 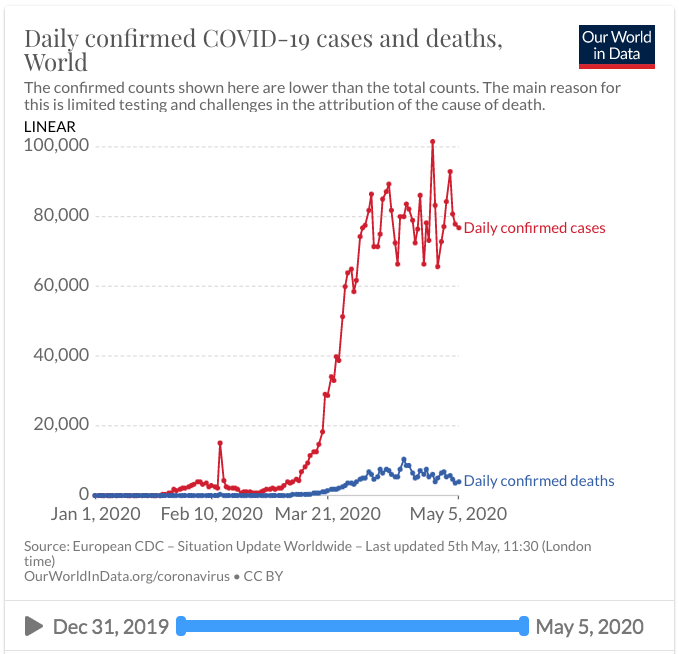 One of the biggest news stories of the week so far is an NYT report citing ‘projections’ ordered by the CDC showing the number of deaths doubling to 3k/day by next month. The NYT cited this as evidence that the push to reopen is premature, even as the CDC and the researchers at Johns Hopkins who compiled the projections played down their importance and predictive qualities.

“What they do is they work with outside academic groups – and in this case they worked with a group at Hopkins that was under contract. This was one of a number of different runs that the Hopkins researchers came up…it’s not at all clear that this is a definitive model…of what might happen,” Gottlieb said.

On the other hand, Gottlieb added that the 3,000/day death toll projection isn’t the worst that he’s seen.

“No, from what I’ve heard is there were others that were worse. As we start to reopen the economy more – you saw airline travel pickup Friday for the first time in 30 days – they’re going to pick up. We are going to have a background of spread, and we are going to have to figure out what that looks like,” Gottlieb said.

Whether the US manages to start reopening without a massive surge in deaths is going to depend on a number of factors, Gottlieb explained.

“I think the issue going forward is going to be ‘where can you go to get tested?’ – but if you get to the point where doctors don’t want to run these tests because if you get a positive result you need to deep clean the office and quarantine your staff,” Gottlieb said.

Moreover, Dr. Gottlieb explained that the US outbreak actually hasn’t been subsiding. Most of the nationwide “progress” is largely due to the success that New York State has had bringing its outbreak – the worst of any state in the US – to heel. If one were to ‘back out’ the New York numbers from the national data, Gottlieb explained, the picture they paint is considerably less rosy. “You certainly can’t conclude that the epidemic has reached its peak…” Gottlieb said. 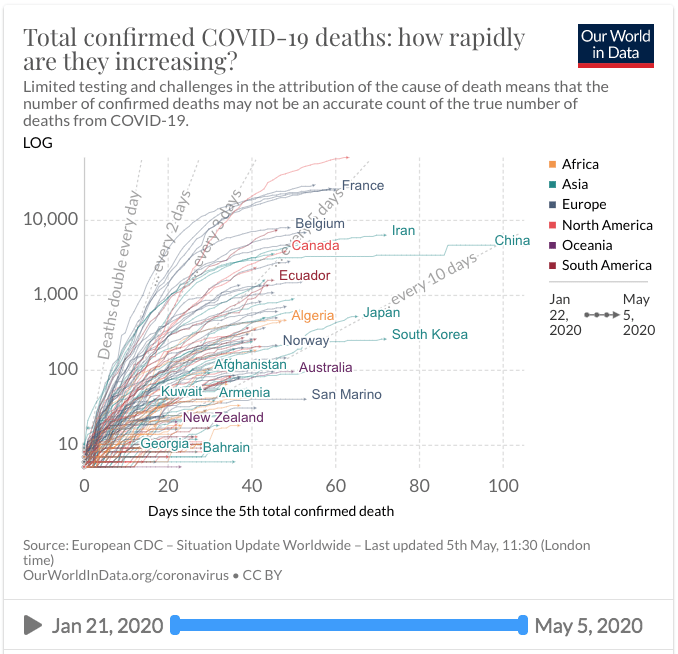 Despite worries about a ‘second wave’, the US and EU4 – Italy, Spain, France and Germany –  have continued to push toward reopening, Russia has continued to move in the opposite direction. According to Reuters, the number of new coronavirus cases reported in Russia on Tuesday has risen by 10,102 over the past 24 hours, compared with a record 10,581-case jump the previous day. Over the last 72 hours, Russia has confirmed some 30k+ cases, bringing its total confirmed caseload to 155,370, along with 1,451 deaths, with many more cases likely still unconfirmed, Reuters reported.

New York Governor Andrew Cuomo and California Gov Gavin Newsom took the public by surprise yesterday when they each announced plans to speed up the phased reopening in their states. Cuomo ordered local officials to start preparing “now” for May 15, when New York’s reopening is expected to start. In California, Gov Newsom – who just last week said it was too early to speculate about a reopening date – said that some more retail businesses in his state would reopen by the end of the week. Germany’s provincial leaders reportedly agreed during a phone call with Merkel on Tuesday to reopen more businesses and allow more students to return to class. On Tuesday, Germany reported a fifth consecutive decline in the number of new cases being confirmed.

On Tuesday morning, the biggest news out of the US pertained to a vaccine trial run by Pfizer: the drug giant said Tuesday that the first patients participating in Pfizer’s massive vaccine trial have been dosed. The study will examine the efficacy of four trial drugs.

The number of new coronavirus cases confirmed in Germany declined for the fifth day in a row on Tuesday, assuaging concerns about a recent uptick in Germany’s rate of viral spread seen after it started allowing some more businesses to reopen.

Hong Kong’s government said Tuesday it would further relax restrictions on public gatherings and allow gyms, cinemas and beauty parlors to re-open by the end of the week as the flow of new coronavirus cases slows to a trickle, with practically every new case found to be imported, rather than locally transmitted.

Australia and New Zealand said efforts to resume travel between the two countries would take some time, as they cautiously re-open their mostly shuttered economies after containing outbreaks of the novel coronavirus.

A team of analysts at Goldman Sachs published a research note yesterday arguing that Sweden’s strategy for confronting SARS-CoV-2 likely couldn’t be replicated in the EU and the US. Well, on Tuesday, Sweden’s chief epidemiologists said the country may have had its first case of the virus as early as November.

As far as we know, local authorities in Wuhan weren’t even aware of the outbreak in November.

Over the past few weeks, we’ve seen more evidence suggesting that domestic spread of SARS-CoV-2 had started in US and other countries as early as January. We can’t help but wonder: if accurate, this would cast the battle against the virus in a whole new light.