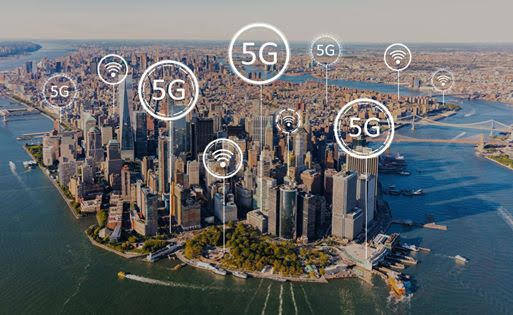 That number is not a misprint! As of April 27th, 2020 NYC has over 6,000 5G towers up and running at full 60Ghz+! These towers can be found on every street lamp, stop light and building!

The death toll from “COVID-19” is the highest in NYC. Some may say because the population is higher in NYC VS other states. The sad and hard truth to swallow is thousands of homeless people there are still living in tents inches apart in close quarters, the homeless did not die nor become sick in large numbers.

The large amount of NYC deaths are not caused by COVID–19 but are caused by F I V E G. 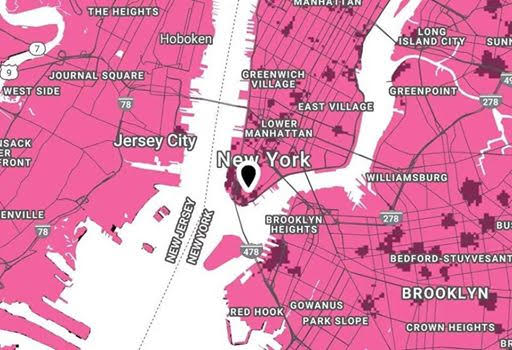 Everything in “pink” is full 5G coverage.” Source: K. Metronome

Article below:
“Recently, the New York City Department of Information Technology and Telecommunications approved 10 franchise agreements with several companies to install 5G equipment on streetlamps and some traffic-light poles.

Allowing wireless equipment on its streetlamps isn’t something new for New York City. It’s been allowing this for 15 years. The effort has resulted in nearly 6,000 pole installations — with 5,000 more in the pipeline — by franchisees throughout the five boroughs.

ExteNet’s CTO Tormod Larsen said ExteNet has had a franchise agreement with the city for a number of years. ExteNet counts all four of the major wireless carriers as its customers in New York City. He explained that each franchisee gets access to a number of poles, and that access is exclusive — they don’t have to share with the other wireless infrastructure franchisees.

Streetlamps are owned by the city of New York. And a lot of intersections have four streetlights. “Typically, two of those would be made available to the franchisees,” said Larsen. “It’s a pecking order based on who’s picking first. We have several thousand poles we have operational in Manhattan today. Obviously, demand is accelerating with 5G and further densification of 4G.”

The startup Ubicquia is touting its streetlight-powered small cell as a relatively easy way to deploy small cells for LTE densification and for 5G because streetlights are already permitted with municipalities. In addition, streetlights are often in close proximity to fiber for backhaul. Ian Aaron, CEO of Ubicquia, said in a previous interview with FierceWireless that there are 360 million streetlights around the world that have a common electric socket, which can be used to power Ubicquia’s small cell.

A reader pointed out that there is sometimes an issue with electrical connectivity for small cells mounted on streetlights because the lights are governed by a CdS cell or photo resistor, which denies power to the streetlight during daylight hours. Lee Gopadze, co-founder of BBI, wrote that, “There is a concept used in municipal streetlight networks of ‘bank lighting’ where one streetlight controls a string of downstream lights and would deny power to any of them during daylight hours. Obviously, small cells need to work 24 x 7, so one must be careful of the existing lighting infrastructure before deciding that these poles can be used for small cell purposes.”

ExteNet’s Larsen said, “For the stuff we do in New York, we haven’t had any major power issues. We bring power to our own poles.” He said it would be difficult to try and use streetlights that are bank-switched from a master pole because the power will go off in the morning. “You don’t want your small cell to only work at night. We don’t do it that way,” he said, “We pull our own power because we need to have these sites metered.”

In addition to participating in the divvying-up of available streetlight inventory and ensuring that electricity is available, the franchisees in New York have to make sure each streetlight is connected to fiber.

“In terms of digging up the streets and getting the fiber to it, the franchise gives us access to the Empire State subway duct system,” said Larsen. “When we need to get to a particular pole, we don’t need to coordinate with other franchisees because it’s ours.” He added that ExteNet has an extensive fiber grid in New York City and “it’s pretty carefully engineered and designed to tie into particular carriers’ networks.”

The current streetlight deployments in New York use a metal container, or shroud, for the wireless equipment.

As part of their agreements, franchisees have to comply with certain rules for the shroud. “The Art Commission of New York came up with a standard look and feel, color of the box that would be attached to the streetlamp,” said Larsen. The shrouds are attached at about 15 feet high on the streetlight poles with antennas on top of the shroud. “Things have evolved; there are so many capabilities that we are trying to accommodate, and that doesn’t fit in that physical box,” said Larsen, who added that the franchisees are in active conversations with the city to make some adjustments to the rules regarding the shrouds. For example, with mmWave antennas, it’s probably better to mount them higher than 15 feet so their transmissions are not obstructed by so many objects.”