Police Departments Colluding with Politicians to Undermine Rule of Law 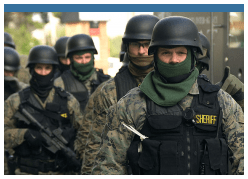 But thanks to the ongoing “state of emergency” and the fact that state governors, mayors, and health officials now rule by decree, we’re witnessing more and more how local law enforcement officers have no particular interest in the rule of law, the Bill of Rights, or basic human rights of any sort. Police have been at the forefront of arresting business owners for the “crime” of using their own private property, using city parks, and engaging in other peaceful activities.

As Judge Napolitano has noted, these “stay-at-home orders”—and the penalties that accompany them—aren’t even real laws since they were never passed by a legislature or brought into being by any process other than on the authority of a single person who is usually a state governor or municipal official. By no definition of “rule of law” do these measures meet basic moral requirements for their imposition on peaceful citizens.

But the police are enthusiastically enforcing these edicts nonetheless, and using them as an excuse to harass the taxpayers.

Here are just a few examples from around the United States.

Keep in mind that no one is required to go near these places or interact with anyone involved. Those who wish to isolate themselves from these businesses and their clientele may freely do so. Yet these are just a handful of the many cases of police harassment involving citations, arrests, and other forms of coercion and intimidation brought against people who are just trying to live their lives. Nor should we assume that this is “as bad as it gets.” Since there is no longer any due process or public legislative process subject to checks and balances, governors and mayors can unilaterally decide at any time to ramp up social distancing requirements and business closures. If the public appears uncooperative, public officials can simply order police to being making mass arrests. We have no reason to think the police would not comply with this order.

After all, police personnel, who do not have a particularly impressive record when it comes to stopping or investigating real crime, have plenty of resources to crack down on nonviolent “perpetrators.”

The cases of New York and Odessa are instructive. Odessa law enforcement officers apparently have the extra time and resources to assemble a SWAT team in response to protests, but does this mean there is no real crime that needs investigating in Odessa? Of course not. According to the FBI’s 2018 crime survey, Odessa had 1,049 violent crimes in 2018, including 118 rapes and 819 aggravated assaults. If late 2019 and early 2020 were at all similar, then we’re talking about hundreds of violent crimes that Odessa-area police officials are ignoring in order to harass people for entering a tavern.

Indeed, if Odessa law enforcement agencies are anything like countless police agencies in other areas, only about half of violent crimes are “resolved” at all. That is,

only 45 percent of violent crime lead to arrest and prosecution. That is, less than half of violent crimes result in what is known as a “clearance” of the crime. Property crime clearances are much worse. Only 17 percent of burglaries, arsons, and car thefts are “cleared.”

Among violent crimes, homicides experience the highest clearance rate by far, at 61 percent. Aggravated assault comes in at 53 percent, and rape at 34 percent.

But these are just cases where arrests are made and prosecutions are initiated. A smaller number of cases actually lead to convictions. A crime may be cleared even when the suspect is later exonerated.

New York is not exempt from these trends, yet the New York mayor recently dispatched one thousand cops to break up Jewish funerals and ensure that people don’t have barbecues on warm spring days.

By the way, there were more than forty-six thousand violent crimes in New York in 2018. But don’t fear, the police have extra personnel to come and break up your small backyard gathering.

There’s nothing surprising here, however. Police have long shown a lack of enthusiasm for addressing real crime, knowing that business owners, small-time drug users, and loiterers won’t fight back, and thus make for much better targets.

This is why police are often found to run and hide from truly violent criminals while the victims must fend for themselves, as in the case of the Parkland shooting or the case of the stabbing of Joseph Lozito.

But police officers and their bosses have convinced themselves that the really important policing right now involves hauling dog groomers off to jail and collecting revenue from parkgoers who are only standing five feet from the next person. But if you have a problem with real crime? You’re likely out of luck.