Should “death science” operatives like Dr. Fauci face the DEATH SENTENCE if found guilty of collaborating to build the Wuhan coronavirus bioweapon? 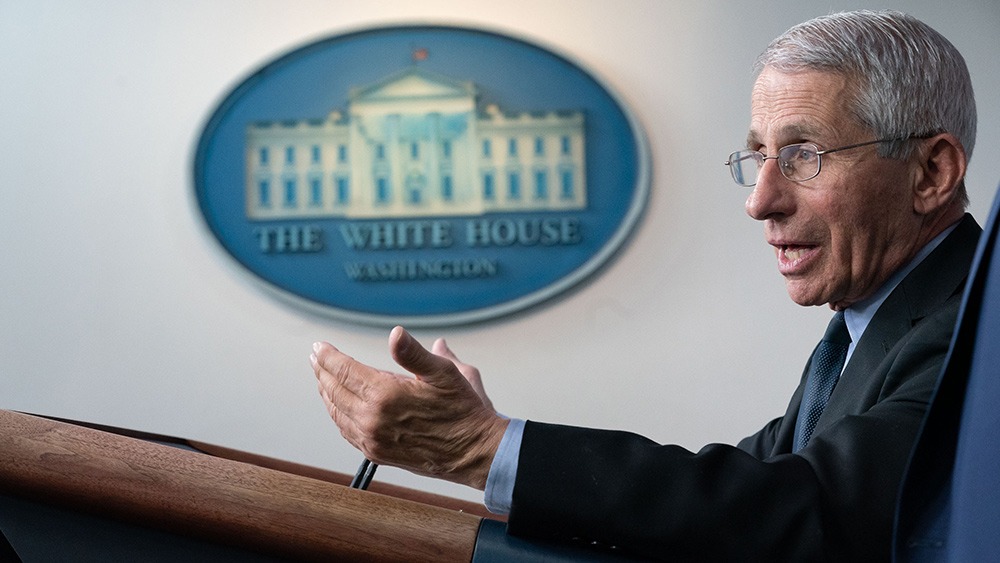 (Natural News) Over the last month or so, it has become increasingly obvious to pandemic observers that “death science” operators like Dr. Fauci have been deeply involved in funding the development of bioengineering research that led to the creation (and release) of the Wuhan coronavirus which has now killed at least a quarter of a million people worldwide.

Even Newsweek — a globalist publication that usually defends depopulation advocates — is now pointing out the ties between Dr. Fauci and the biological engineering industry that gives rise to bioweapons designed to exterminate humanity. “[J]ust last year, the National Institute for Allergy and Infectious Diseases, the organization led by Dr. Fauci, funded scientists at the Wuhan Institute of Virology and other institutions for work on gain-of-function research on bat coronaviruses,” reports Newsweek.com, adding: (emphasis added)

In 2019, with the backing of NIAID, the National Institutes of Health committed $3.7 million over six years for research that included some gain-of-function work. The program followed another $3.7 million, 5-year project for collecting and studying bat coronaviruses, which ended in 2019, bringing the total to $7.4 million.

Many scientists have criticized gain of function research, which involves manipulating viruses in the lab to explore their potential for infecting humans, because it creates a risk of starting a pandemic from accidental release.

Dr. Fauci, in other words, helped funnel money into a program that the scientists knew was working to develop “gain-of-function” properties that could result in a global pandemic. They even collaborated with communist China to conduct the research, even though China is an enemy of humanity and has a long history of accidental releases of level-4 biohazard specimens.

A second phase of the project, beginning that year, included additional surveillance work but also gain-of-function research for the purpose of understanding how bat coronaviruses could mutate to attack humans. The project was run by EcoHealth Alliance, a non-profit research group, under the direction of President Peter Daszak, an expert on disease ecology. NIH canceled the project just this past Friday, April 24th, Politico reported.

The proposal of that project specifically details how they planned to built a biological weapon that could devastate humankind:

The project proposal states: “We will use S protein sequence data, infectious clone technology, in vitro and in vivo infection experiments and analysis of receptor binding to test the hypothesis that % divergence thresholds in S protein sequences predict spillover potential.”

In layman’s terms, “spillover potential” refers to the ability of a virus to jump from animals to humans, which requires that the virus be able to attach to receptors in the cells of humans.

In other words, this is the use of genetic engineering technology to build biological weapons that are designed and intended to exterminate human life.

Hundreds of scientists called for a halt to the dangerous research, but Dr. Fauci made sure the grant money kept flowing

According to Richard Ebright, an infectious disease expert at Rutgers University, the project description refers to experiments that would enhance the ability of bat coronavirus to infect human cells and laboratory animals using techniques of genetic engineering. In the wake of the pandemic, that is a noteworthy detail.

Ebright, along with many other scientists, has been a vocal opponent of gain-of-function research because of the risk it presents of creating a pandemic through accidental release from a lab.

… The work entailed risks that worried even seasoned researchers. More than 200 scientists called for the work to be halted. The problem, they said, is that it increased the likelihood that a pandemic would occur through a laboratory accident… Dr. Fauci defended the work.

Dr. Fauci, it turns out, has been a key cheerleader for this “death science” research for decades. He has also been credibly accused by Dr. Judy Mikovitz and other virologists of stealing intellectual property and stifling whistleblowers who sought to expose the truth about NIH-funded research and how it threatens humanity. Hundreds of other scientists have publicly and repeatedly blasted Dr. Fauci and the NIH for their work in building weapons against humanity. Again, from Newsweek:

In early 2019, after a reporter for Science magazine discovered that the NIH had approved two influenza research projects that used gain of function methods, scientists who oppose this kind of research excoriated the NIH in an editorial in the Washington Post.

“We have serious doubts about whether these experiments should be conducted at all,” wrote Tom Inglesby of Johns Hopkins University and Marc Lipsitch of Harvard.

At what point do we invoke the death sentence for those found guilty of building devastating weapons of mass destruction that kill the innocent?

Prof. Francis Boyle has long called for the death sentence for scientists who are found guilty of engaging in research intended to build biological weapons that target human beings. That appears to be precisely what Dr. Fauci has done over a career spanning decades. It begs the obvious question: Should Dr. Fauci be criminally investigated and prosecuted for carrying out crimes against humanity? And if found guilty, should he face the death penalty? Should other scientists who knowingly collaborated on this project share the same fate?

Right now, without exception, every scientist tied to the Wuhan Virology Institute and its gain-of-function research claims the Wuhan coronavirus couldn’t possibly have come from a lab. They are lying to the world, falsely claiming the insertion of gene sequences into the virus are the result of natural, zoological mutations in the wild. The reason they’re lying, of course, is because they know they are guilty of building a weapon that has already killed a quarter of a million innocent people, and they correctly fear that if the truth gets out, they may face criminal prosecutions themselves.

Our society sentences murderers to death after they’ve killed a single person. What should be the consequences dealt out to those who conspired to build deadly biological weapons that indiscriminately killed hundreds of thousands of people?

Is an NIH mass murderer running the White House response to the coronavirus?

Frustratingly, Mr. “death science” Dr. Fauci himself appears to be in charge of the White House response to the pandemic. Trump appears to have been mesmerized by Dr. Fauci’s vaccine promises, and Dr. Fauci is being celebrated by the liberal media as a hero for humanity rather than the death science doctor he more accurately represents. (The left-wing media also celebrates communism, Mao, Castro and Stalin, by the way, so Dr. Fauci seems to be in good company when it comes to genocide and mass murder.)

Is Trump throwing in with the death science industry and the NIH? So far, it appears Trump lacks the scientific knowledge to even recognize when he’s being manipulated by death science operators like Fauci. And with Trump now pushing for 300 million doses of an obviously experimental, untested coronavirus vaccine before the end of this year, it almost seems as if Dr. Fauci is setting up Trump to take the fall for a vaccine public health catastrophe that ends in mass fatalities and the end of the Trump administration after millions of Americans die from either the coronavirus or the vaccine itself (or a combination where the vaccine causes an “enhanced” immune response to subsequent infections, killing millions).

It also raises the obvious question: If society feels justified in ending the life of a murderer who is found guilty of killing one person, what should be the punishment for those who use science to build murderous weapons that kill hundreds of thousands or millions of people?

Even more alarmingly, this “death science” research continues to be conducted right now, via the NIH and Dr. Fauci himself. What sort of dangerous weapon of mass suffering and death will they concoct after another year or two of taxpayer-funded research? When will any of the NIH funding activities of the bioweapons industry be independently audited? At what point are scientists who build deadly bioweapons to be held accountable when their nanotechnology escapes into the wild and devastates human civilization?

Watch this video from Peak Prosperity for a more detailed analysis of the Fauci “death science” industry and its war on humanity:

Weapons of mass destruction, built by the pharmaceutical cartels that profit from pandemics

If such research is ever to be conducted again, shouldn’t it be limited to an orbiting space stations that’s tied to a detonation switch so that the rest of us on Earth could blow up all the orbiting scientists if they screw up and suffer a lab accident? I’d rather see a dozen bioweapons scientists burn up in the atmosphere than see another round of coronavirus devastate human society and crush our global economy.

By the way, what are Dr. Fauci’s ties to vaccine manufacturers and pharma drug cartels? Isn’t he acting out of a conflicted desire to protect his own financial interests rather than prioritize what’s best for public health? It seems to me that Dr. Fauci has all the characteristics of a super villain like The Penguin from the Batman series, or possibly Doctor Octopus from the Marvel universe. He’s desperately to achieve a celebrity-like public image while secretly plotting to build weapons to exterminate human beings, all while siphoning money from the public to fund his demonic, anti-human research.

It almost sounds like a comic book villain… except it’s real, and this guy is practically running the White House.

I think it’s time that we all demanded a criminal investigation and possible prosecution of Dr. Fauci and all the other “death science” pushers who were complicit in the funding of the gain-of-function coronavirus research in the Wuhan lab.

These people belong behind bars. They are enemies of humanity and criminals whose heinous crimes span the entirety of human history. What Dr. Fauci has done to humanity ranks with the mass murders carried out by Stalin, Mao and even the Third Reich. And we will be lucky indeed if the number of coronavirus fatalities around the world somehow manages to stay under six million by the time this deadly bioengineered weapon has run its course.

Dr. Fauci, you have blood on your hands. The real question is: Will the American people demand he be held accountable? Or will they stupidly declare him a “hero” for pushing vaccines that he claims will treat the very same weapon system that he helped fund and build in the first place?

It’s time for America to rise up against the death science industry and demand arrests and prosecutions of all those scientists who took part in building this weapon system against humanity. By building weapons that are deliberately designed to kill and maim innocent human beings, they have forfeited their right to exist in our society.

Read Pandemic.news to stay informed as we fight for human survival against a global cartel of death merchants and pharma villains who are following a demonic, anti-human agenda.