Florida will soon be attacked by highly advanced weather weaponry as the NWO geoterrorists seek to severely damage the state and Gov. DeSantis before the election. 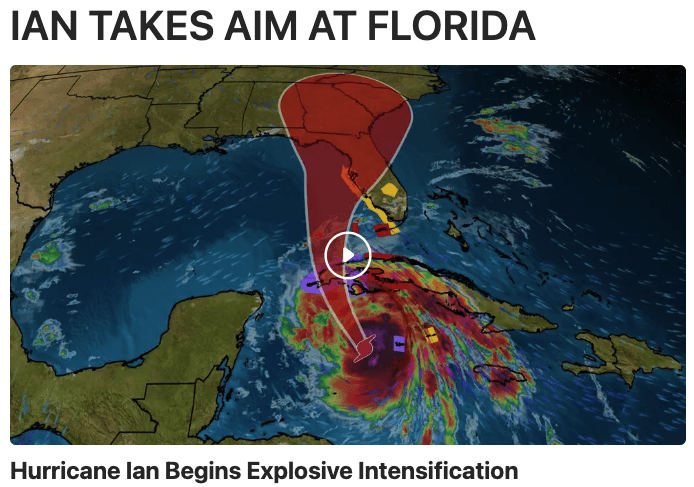 Whenever the globalist-controlled mainstream media uses wording such as “Explosive Intensification”, they are only providing cover to the NWO geoengineers who are both intensifying and steering these devastating superstorms into the conservative Deep South states year after year.

What better way to basically disenfranchise Republican voters in advance of the most important midterm election cycle in U.S history than to destroy their coastal communities as well as other cities and towns within the cone of these mega-hurricanes.

Which is precisely why Governor Ron DeSantis needs to respond to these never-ending acts of weather terrorism post-haste.  As follows: 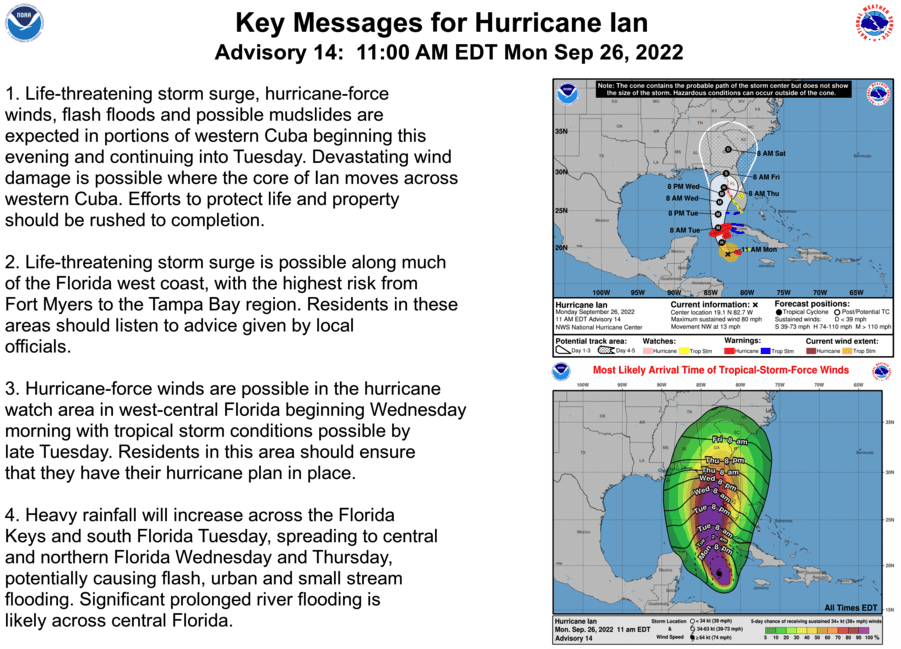 In light of the previous letters that we have sent to you in this regard, we assume that you are totally up to speed on the devastating weather warfare and geoterrorism targeting Florida over the past several years.  Our most recent open letter to you on September 13th is linked below:

Weather War Against Florida Amping Up
Right Before Midterm Elections

Gov. DeSantis, you know from living in Tallahassee, Florida that the weather patterns have been altered radically since Joe Biden was inaugurated.  Up until just a few days ago, much of North Florida has been blanketed with an unparalleled chemcloud cover for months, which was quite deliberately chemically geoengineered in preparation for this 2022 hurricane season.

As some of the political analysts at SOTN predicted, Florida would be the primary target of manufactured superstorms during the weeks leading up to Election Day.  There are multiple objectives which the New World Order globalists have in mind as they carry out these highly consequential acts of geoterrorism.

First, the Democrats are determined to steal the gubernatorial election in Florida.  They desperately need a Democrat governor in Tallahassee prior to the 2024 POTUS election.  Toward that end, their geoengineers will use all the weather warfare necessary to inflict maximum damage to the state of Florida between today and November 8th.

By aiming what will soon be Hurricane Ian at both the Florida Panhandle as well as the west coast, they plan on causing calamitous destruction.  In this way, you will be unable to campaign during the vital home stretch of this election cycle so preoccupied your whole team will be.

Most significantly, the Democrat’s owned and operated mainstream media statewide will use this meticulously engineered weather catastrophe to greatly exaggerate any small failures that may occur during this week of “hurricane prep”.  If Ian is morphed into a real superstorm, your response during the aftermath will be criticized incessantly by the same “FAKE NEWS” media outlets.

Secondly, the Democrats have long sought to manufacture as much chaos, confusion and conflict throughout Florida prior to Election Day so as to provide sufficient cover for their rampant vote fraud and planned election thefts.

The Patriot Movement here in North Florida saw this exact strategy used during the lead-up to the 2018 election.  The most powerful Hurricane-Tornado to ever hit the United States — Hurricane Michael — was calculatedly aimed right at the Panhandle, wiping out whole communities dominated by the Right.

Because of that transparent geoterrorist operation, numerous conservative voting districts were effectively shut down prior to your election on November 6, 2018.  As a matter of historical fact, because so many Republicans were denied their right to vote due to the unprecedented storm damage after Michael, you very nearly lost that election to the now indicted Andrew Gillum.  As follows:

HURRICANE MICHAEL: A Geoengineered Superstorm Aimed at the
Florida Panhandle to Swing the 2018 Election to Andrew Gillum

Gov. DeSantis, given the endless fake polls that are now being published by the MSM showing Charlie Crist gaining on you very quickly, and even him winning by the most contrived polling platforms, it’s evident that the Democrats will fabricate a false pretext to justify why you ‘lost’ in November.  Tearing up the many RED counties in Florida via a “Hurricane Ian megastorm” gives them that patently false vindication.

Thirdly, by aiming Hurricane Ian right at Florida’s capital, the NWO globalist cabal is sending a message — LOUD & CLEAR — that you are PUBLIC ENEMY #1.  That the very first hurricane to hit the USA this storm season makes landfall a mere 20 miles south of Tallahassee ought to be a clear sign of their nefarious intentions, especially if it hits as a truly catastrophic Cat 4 or 5.

By wreaking such havoc throughout the capital, surely the FL Department of State will be profoundly impacted.  The resulting chaotic predicament will provide a conducive environment for the Democrats to execute their many schemes, including massive voter fraud and vote-counting corruption.

Since the FL Dept. of State (DoS) has already been completely infiltrated by Deep State operatives, there are certainly many weak links in the electoral process which they will exploit after a disastrous frankenstorm.  Similarly, given that so many DoS employees are life-long Democrats, many of whom are actually globalist agents of the U.S. Intelligence Community, and who were strategically positioned at the Dept. of State to rig this very midterm election, you understand just how precarious the situation can become in the aftermath of an overwhelming “Hurricane Ian”.

There are several other critical goals behind OPERATION HURRICANE IAN, but for the sake of brevity we will cover those in a follow-up open letter.  The following video explains just how common and pervasive these weather war operations are, especially during decisive election years.

OCTOBER SURPRISE: Weather Warfare Across the Nation
is Being Purposefully Geoengineered (Video)

Lastly, please take a close look at the following screenshot from the Orlando Sentinel.  It’s important to understand that whenever the MSM uses terms like “rapid intensification”, that means the Tropical Storm is being deliberately amplified into a very dangerous superstorm by the geoengineering weather warriors.  We north Floridians saw this exact same dynamic happen with Hurricane Michael, just as the geoengineers did with Hurricanes Katrina, Rita and Wilma during the utterly cataclysmic 2005 hurricane season. 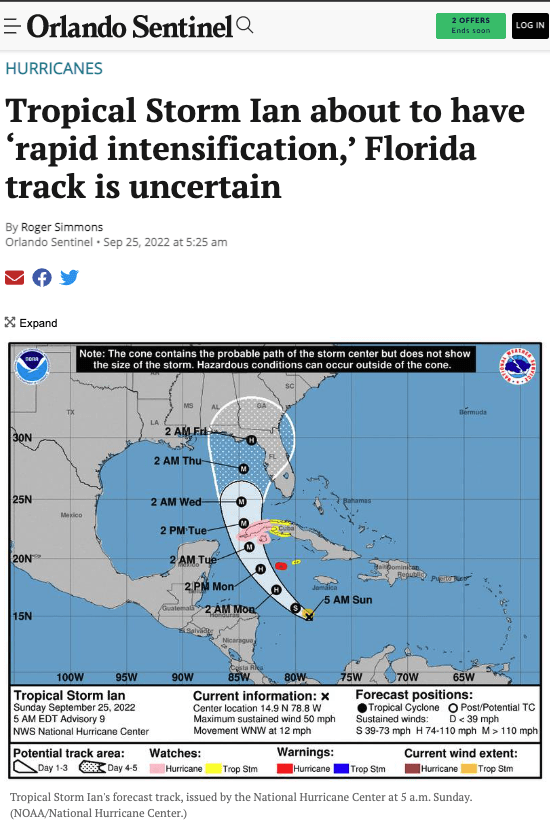 In conclusion, may we say that the great State of Florida represents the last bulwark against the now rapid implementation of the New World Order agenda.  Florida’s liberation from the Covid tyranny proved to be a great inspiration to the whole world, as you well know.

Both you, Gov. DeSantis, and President Trump reside in this “Freedom State” which has served as an unprecedented magnet to Patriots across the USA.  Turning Florida into a deep RED state is the last thing the NWO cabal wants to see happen; hence, destroying the Sunshine State is now an extremely high priority for them.

The globalists know that, to collapse the American Republic, both Florida and Texas must be taken over by communist-run Democrat regimes.  Therefore, it’s quite clear that they will do WHATEVER is necessary to accomplish that treasonous goal, even directing a ruinous and highly lethal weather weapon at the many Patriot-populated communities across the Florida Panhandle.

We pray that you will take the measures necessary to avert this superstorm.  Perhaps that will include talking about chemtrails and chemical geoengineering publicly for the first time ever by an American elected official.  Were the people of Florida to hear about such climate manipulation and weather warfare from you, these well concealed acts of  geoterrorism would stop immediately. See: The Intensive Chemtrail Spraying Over Tallahassee FL Stopped Right After This Open Letter Was Featured On SOTN

Gov. DeSantis, the entire Patriot Movement stands solidly behind you during this defining moment for Florida and the American Republic.  As the prescient saying goes, “As Florida goes, so goes the Republic.”

Concerned Florida Residents
Submitted to State of the Nation
November 5, 2021

SOTN Editor’s Note: Please, everyone, post and disseminate this open letter far and wide. The more folks around the nation who become aware of OPERATION HURRICANE IAN, the greater the likelihood it can be neutralized. Above all, pray that this planned superstorm will safely dissipate in the Gulf of Mexico by divine intervention.