Great, Cell Tower Fires Have Finally Made Their Way to Canada

5G cell towers have been set on fire across Europe due to a bonkers conspiracy theory. Now Canadian police are investigating if a spate of fires here is connected. 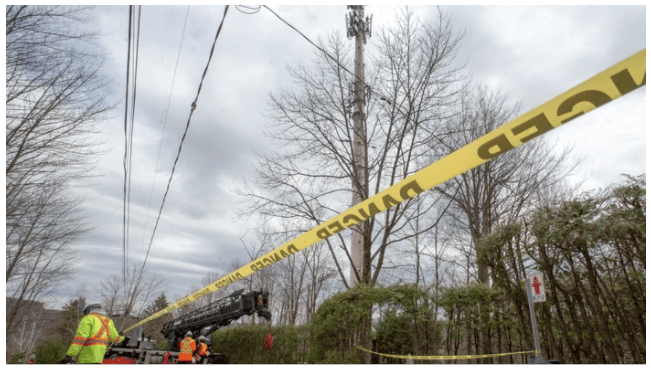 TECHNICIANS REPAIR A CELL TOWER IN PIEDMONT, QUEBEC, ON MONDAY AFTER A FIRE THAT POLICE ARE CALLING CRIMINAL. PHOTO BY RYAN REMIORZ/CP

Last Friday in Laval, Quebec, a cellphone tower went up in flames.

The blaze forced 20 people who lived nearby to evacuate. Three days later, two other cellphone towers in nearby towns were lit on fire within 20 minutes of each other, and the following day, another tower in Laval was set ablaze.

Early Thursday morning, two more towers caught fire, this time in St-Jerome and Blainville. Quebec police arrested a man and woman in a nearby town but have not laid charges.

“(The couple) is linked to the fires of the cell towers that occurred in the last days,” tweeted Quebec Provincial Police (in French). “They will be questioned.”

Provincial police spokesman Marc Tessier told VICE on Wednesday that investigators have determined that the fires are criminal and are looking into if they are connected to 5G conspiracy theories.

The 5G conspiracy is “only one thing but it’s part of the investigation, for sure,” Tressier said.

5G cell towers have become a lightning rod for conspiracy theorists during the pandemic. They believe the waves emanating from 5G towers cause humans to get sick, by mutating our DNA or degrading our immune systems, for example—and therefore making us more prone to contracting the coronavirus.

Similar arsons have taken place all over the world. In the U.K. more than 50 cell towers have gone up in flames—some of which authorities say were done by conspiracy theorists terrified the towers were hurting them or their families. At the site of one of the blazes in the Netherlands, a message saying “Fuck 5G” was scrawled next to the tower.

The 5G theory has been debunked and fact-checked many times. The World Health Organization, in a section of their website dedicated to debunking myths, says, “5G mobile networks DO NOT spread COVID-19…Viruses cannot travel on radio waves/mobile networks. COVID-19 is spreading in many countries that do not have 5G mobile networks.”

But much like the coronavirus at the heart of the theory, the beliefs have swept the globe. Videos proselytizing about the harms of 5G and connecting it to the virus have been viewed millions of times since the start of the year, and the theory has even been endorsed by doctors and celebrities including M.I.A. and Woody Harrelson. Non-coronavirus conspiracies about 5G are also rampant.

Dr. Stephen Lewandowsky, the chair of cognitive psychology at the University of Bristol, told VICE that it’s important to not laugh off the crazy-sounding ideas.

Lewandowsky said it’s not surprising that conspiracies are proliferating right now because “pandemics have a long history of leading to conspiracy theories.” In fact you can even find some people blaming the Spanish Flu on radio waves even though the technology didn’t come along until after the pandemic.

“It’s a frightening situation,” said Lewandowsky. “People feel that they’ve lost control and the moment that happens some people turn to conspiracy theories. It provides psychological comfort to think that there’s this cabal of bad people out there who are responsible for this.”

Bell and Rogers, the telecom companies that own and operate the towers that were set on fire in Quebec, told VICE that the towers were 4G or 3G towers, not 5G. Many of the towers burned in other countries were mistaken for 5G towers.

“While we are thankful no one has been hurt, it is very concerning that critical infrastructure needed to keep Canadians connected, including to emergency and 911 services, appears to have been deliberately targeted, putting lives at risk,” said a Rogers spokesperson. 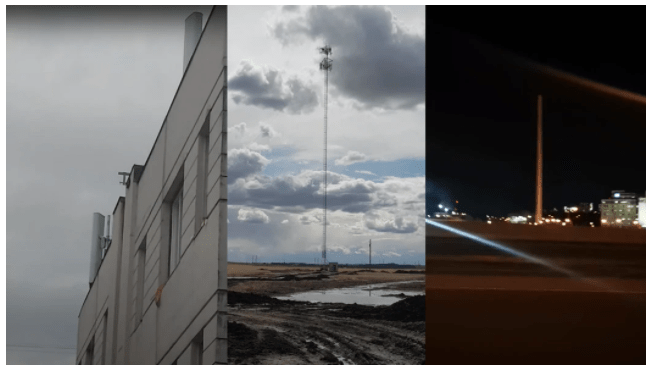 SCREENSHOTS FROM A COLLECTION OF VIDEOS ABOUT 5G TOWERS IN CANADA. PHOTO VIA SCREENSHOT.

Canadian public officials have condemned the spree of arsons. Public Safety Minister Bill Blair said in a tweet he was “concerned to hear reports of cellphone towers being vandalized in Canada” and reminded Canadians “that vandalizing these towers is a serious criminal offence.” Industry Minister Navdeep Bains tweeted, “These criminal acts are completely unacceptable and threaten emergency services.”

Social media giants YouTube and Facebook, which work as a breeding ground for conspiracy theories, are taking direct action against the 5G theory. YouTube announced they were pulling videos focusing on the subject and Facebook was fact-checking the conspiracy. Still though, pages of people pushing the theory are just a click away.

“Here’s some 5G towers installed in downtown Vancouver,” a man says in one YouTube video while awkwardly filming a building. “Don’t get on your phones with that or you’re going to be controlled by the towers of death.”

This story have been updated to include two new fires and news of the arrests.