Everyone, before you react to anyone out in public, please become aware of this increasingly common Covid ‘vaccine’ adverse effect! 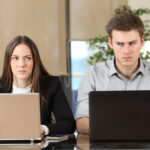 (NaturalHealth365)  It seems that there is yet another thing that we can blame on COVID-19: a bad attitude.  Or at least a worse one.

If you’ve noticed that people aren’t quite as nice as they used to be pre-pandemic, you’re in good company – and you may be picking up what the scientists are learning.  A study by Angela Sutin of Florida State University College of Medicine indicates that the COVID-19 pandemic potentially altered people’s personalities worldwide.

How did the pandemic affect our personalities?

The Understanding America Study gathered data from 7,209 people and 18,623 assessments via online participation.  The researchers compared five-factor model personality traits between May 2014 through February 2020, considered pre-pandemic, and March 2020 through December 2020, with some falling between 2021 and 2022, which were in the heat of the pandemic.  Those traits were agreeableness, conscientiousness, extraversion, neuroticism, and openness.

Of these groups, young adults exhibited disruptive maturity, which included a decrease in conscientiousness and agreeableness and an increase in neuroticism.  Conversely, the group comprised of the oldest adults in the study did not exhibit any significant increases or declines in personality traits.

Furthermore, the personality changes were minimal early in the pandemic but steadily and dramatically increased, beginning in 2021, with the most changes found in the group comprised of young adults.  They became moodier, less trusting, less responsible, more prone to stress, less restrained, and less cooperative.

What about other stressful events?

Other studies have examined how personality traits can be affected by certain stressful events like hurricanes and earthquakes.  But unfortunately, they have not found any link between the two.  However, The COVID pandemic has spanned the entire world and touched almost every aspect of people’s lives.

This stressful event is much different from the rest.

So, what is the takeaway?

The COVID pandemic, whether you feel the reports of the so-called virus were inflated by the media or absolutely true, touched every single part of our lives.  Stories from around the globe emerged daily, and there was really nowhere anyone could go to get away from it – and everyone felt the effects and is still feeling them.

The study’s authors concluded that when a stressful event affects an entire population, that personality is undoubtedly affected, particularly in younger adults.  And those changes could become the new norm moving forward.

So it can be said that the COVID pandemic caused several changes in our world and our society, but it also caused a change in us and how we operate in the world.  On a positive note, two of the best things you can do to improve your physical, mental and emotional well-being would be to turn off mainstream media news channels and eat a healthier, organic diet.