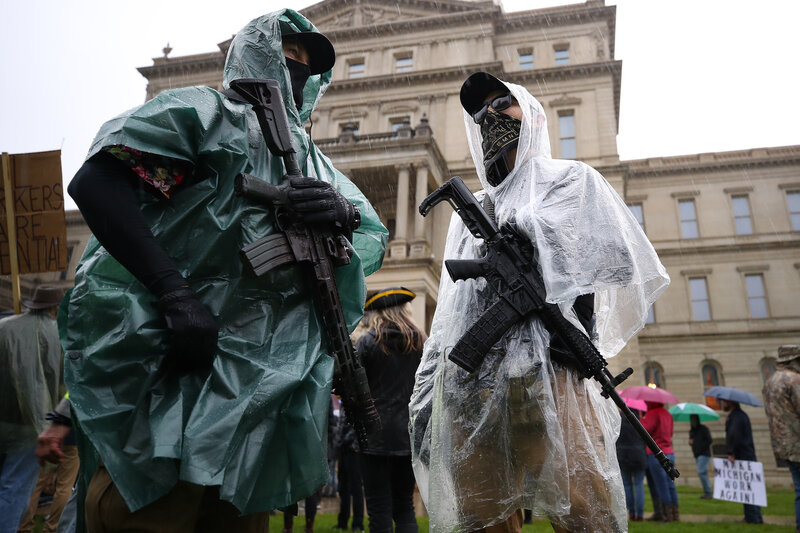 Protesters carrying weapons gather at the Michigan Capitol on Thursday in Lansing. Protesters are demonstrating against Democratic Gov. Gretchen Whitmer for the coronavirus stay-at-home order in effect through May 28.
Gregory Shamus/Getty Images

Despite heavy rain, armed protesters gathered Thursday at the State Capitol in Michigan in what the organizing group, Michigan United for Liberty, has branded “judgment day.”

This was the third planned demonstration since Michigan has been under a stay-at-home-order from Democratic Gov. Gretchen Whitmer to slow the spread of the coronavirus.

Ahead of Thursday’s protest, comments were made in private Facebook groups threatening Whitmer and lawmakers with violence, according to reporting by the Detroit Metro Times.

When asked about the threats in a Wednesday appearance on ABC’s The View Whitmer said, “I would be not truthful if I said it didn’t bother me. It certainly does.”

Whitmer added, “These protests, in a perverse way, make it likelier that we’re going to stay in a stay-home posture.”

Concern about Thursday’s gathering was higher than previous protests. But rain and an interruption in planning — Facebook reportedly removed the organizers’ private group from their platform for inciting violence — may have curbed the crowd, which seemed substantially smaller than two weeks ago. That was when armed protesters brought signs that compared Whitmer to Adolf Hitler, showed nooses and Confederate flags. Some signs read, “Tyrants Get The Rope.”

Tensions have been brought to a boil between Whitmer and Republican leadership in the state after the governor not only rebuffed Republican plans to reopen the economy in favor of following advice of epidemiologists from the University of Michigan, but also extended the stay-at-home order through May 28.

Behind all of this is an emerging battle over guns in the Michigan State Capitol.

After the second protest, state Democratic lawmakers requested that the Michigan State Capitol Commission ban guns on the premises. On Monday, the Democratic attorney general issued an opinion saying the appointed body had the authority to do so and warned against a “powder keg dynamic” created by heavily armed protesters.

The commission demurred and instead formed a subcommittee to study whether it had the authority to make the decision.

Republican Senate Majority Leader Mike Shirkey later called the notion of a gun ban “cowardly” in a floor speech, calling for protesters who are threatening on Thursday to be arrested by state police.

Both the governor and attorney general noted Wednesday that protesters could be charged with brandishing if they are threatening to others.

“This is a terribly concerning development in that we have legislators who are showing up to work wearing bulletproof vests. That is disenfranchising thousands of people in our state if their legislator doesn’t feel safe enough to go to work and to do what their job is,” said Whitmer in her interview on The View.

“I respect people’s right to dissent, but that does not extend to endangering other people’s lives and we take it very seriously,” said Whitmer. Both the state House and Senate, whose schedules are decided by Republican leadership, are adjourned through Tuesday next week.