‘They Went for the Complete Steal!’ 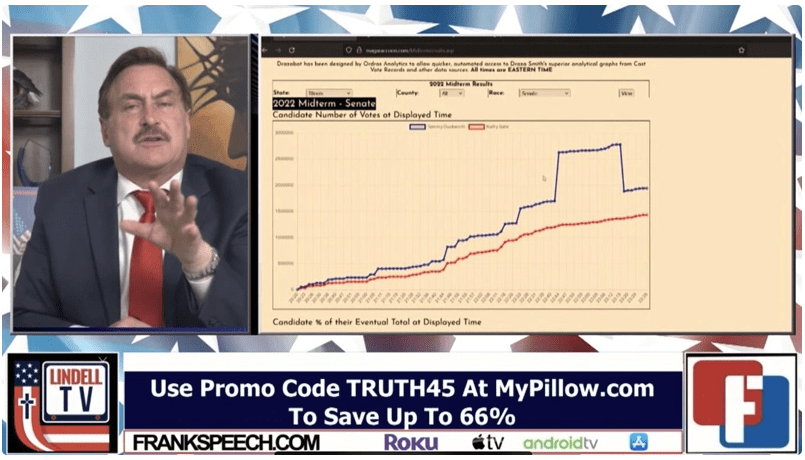 ‘They Went for the Complete Steal!’ Dems Use ‘Biden Bump’ Strategy to Secure Crucial Races

• ‘We will never stop until the machines are melted down and turned into prison bars!!!’ commented MyPillow CEO Lindell.

Many aspects of the 2022 midterms Tuesday night appeared to be a replay of the suspicious activity seen during the 2020 presidential election.

During the 2020 race, Dems blamed Donald Trump’s loss on a “red mirage” that showed him in the lead on election night, however in the following days he was overtaken by Joe Biden as Dems received massive overnight ballot dumps they claimed came from mail-in voting, as they also miraculously found thousands of Democrat votes.

“They went for the complete steal!” Lindell remarked on Truth Social, referring to a Midterm results graph showing suspicious activity in the Minnesota governor’s race between Tim Walz (D) and Scott Jensen (R).

The “Biden Bump” also appeared to emerge in the Michigan House race between Elissa Slotkin (D) and Tom Barrett (R), where the candidates were neck and neck until a post-midnight bump in votes in favor of the Democrat candidate.

“Another race being stolen in the middle of the night,” Lindell commented in reference to a graph showing a dubious late-night/early morning vote spike in the Michigan attorney general race which favored of Democrat Dana Nessel over Republican candidate Matthew de Perno.

“We will never stop until the machines are melted down and turned into prison bars!!!” Lindell added.

“They are currently stealing Herschel Walker’s race with the machines!” Lindell again declared.

With numerous reports of voting machine glitches and malfunctions on top of ballot issues across the country, Lindell’s observance of the mysterious bumps in votes – all in favor of the Democrat Party – may require a more thorough investigation.