“The Biggest Financial Scandal in U.S. Political History” (And the most radioactive one, too!)

BANKMAN’S FTX SCAM:
The Khazarian Crypto CON
of the Century 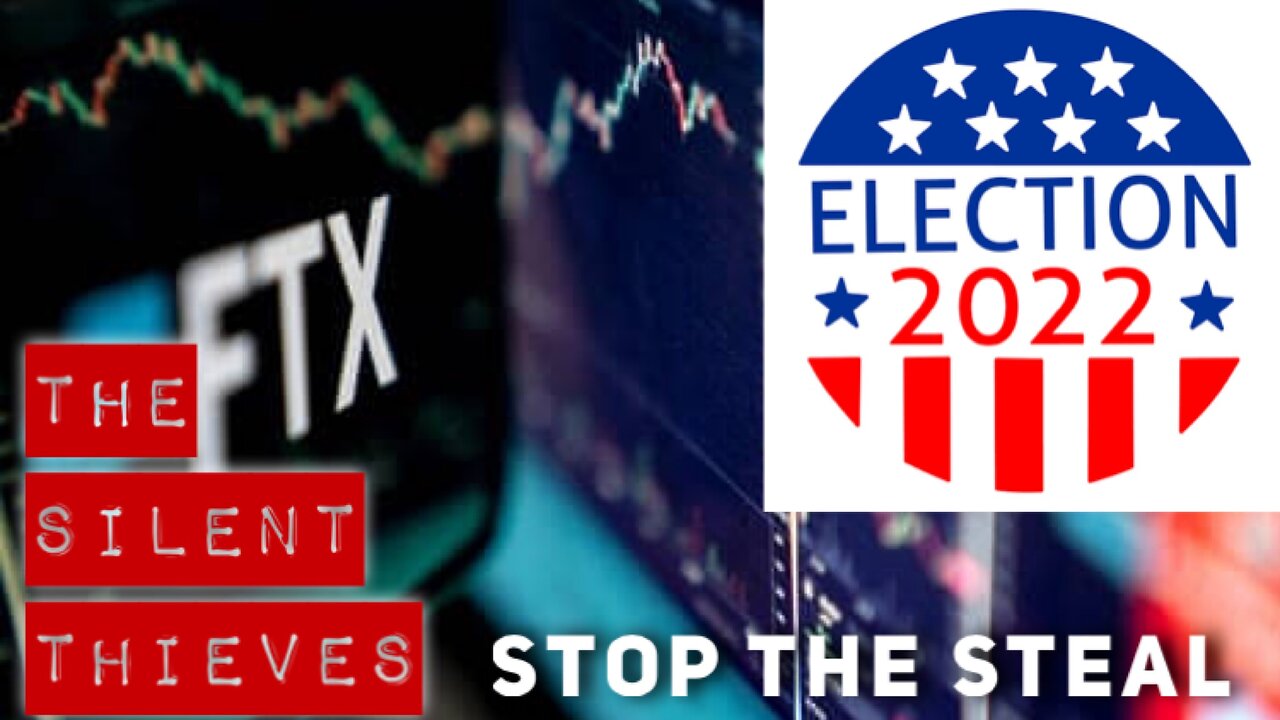 Yes, it is all of these, but it’s also something so HUGE that this post will only expose the tip of the iceberg—an immense iceberg representing an election stealing enterprise involving the Biden Administration, Ukrainian Government, Democrat Party, U.S. Intelligence Community, Securities and Exchange Commission, Cryptocurrency Industry, among many other BIG players.

That this whole thing was blown wide open on November 7th — only one day before Election Day — is certainly no coincidence. A close look at all the names who are involved, both directly and indirectly, distinctly reflects a “cohencidence’.  That this crypto scam further blew up on November 9th, the day after Election Day, is certainly a sign of poetic justice. That FTX declared bankruptcy on November 11th was the icing on this cake of truly Kafkaesque corruption and criminality.

No, the FTX meltdown was undoubtedly no quirk of fate; rather, it came and went in a D.C. flash revealing so many well-kept secrets and sordid schemes, felonious scandals and despicable scams.

‘I feel bad for those who get f***** by it, by this dumb game we woke westerners play where we say all the right shibboleths [sic] and so everyone likes us.’[1]

*Shibboleth is a Hebrew word that now means a custom, principle, or belief distinguishing a particular class or group of people, especially a long-standing one regarded as outmoded or no longer important

You know how they always say that: “A picture is worth a thousand words“. Well, in the case of Sam Bankman-Fried’s FTX mega-scandal, surely a tweet may be worth a thousand pictures. So let’s first take a real close look at some of the recent and relevant tweets with regard to what is now known as “The Biggest Financial Scandal in U.S. Political History”. 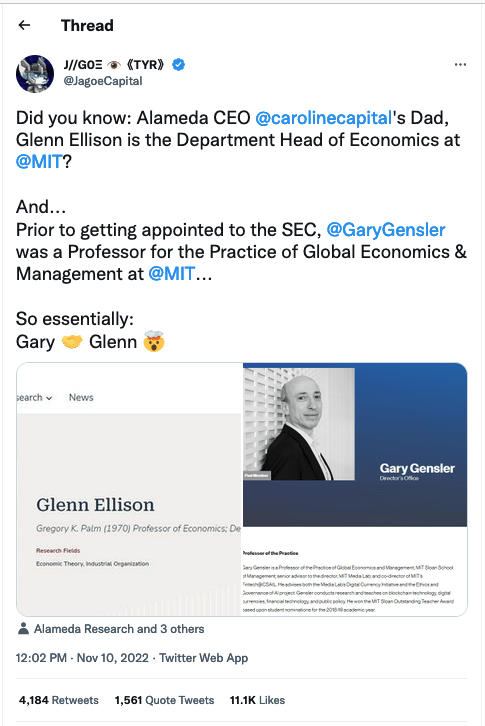 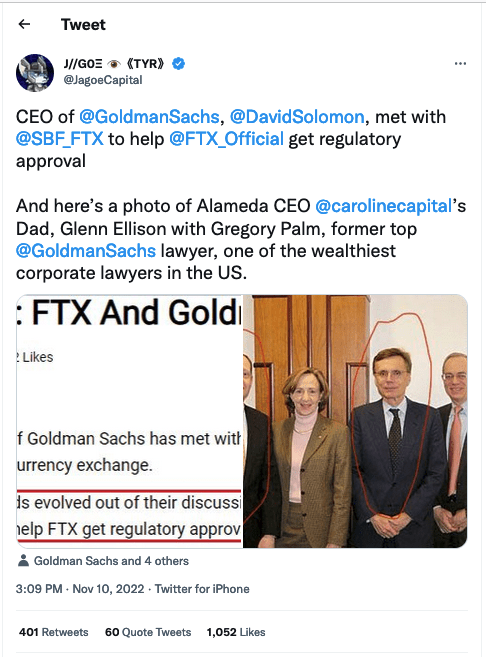 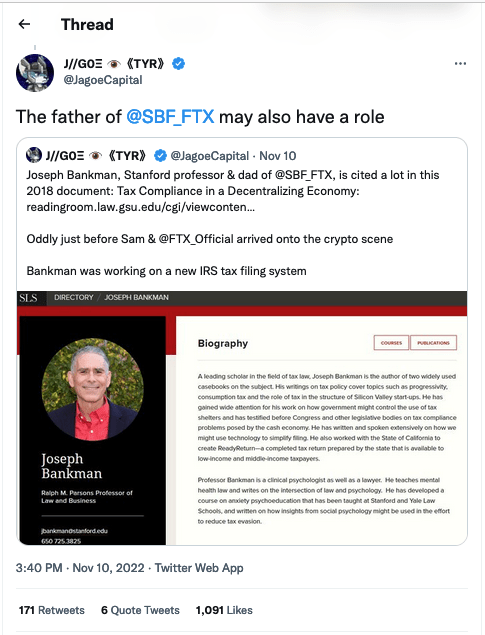 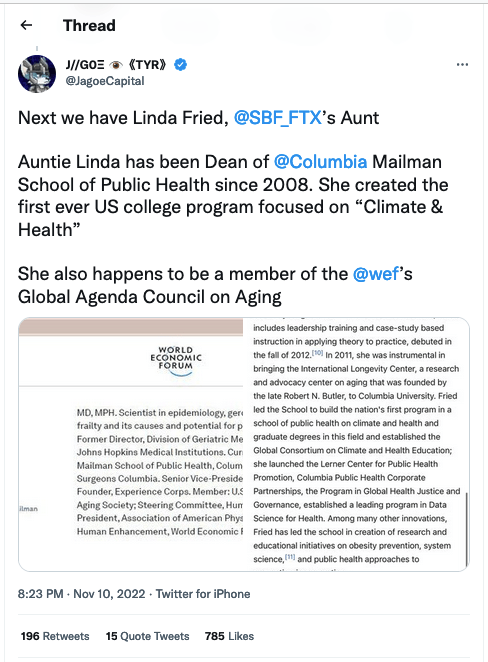 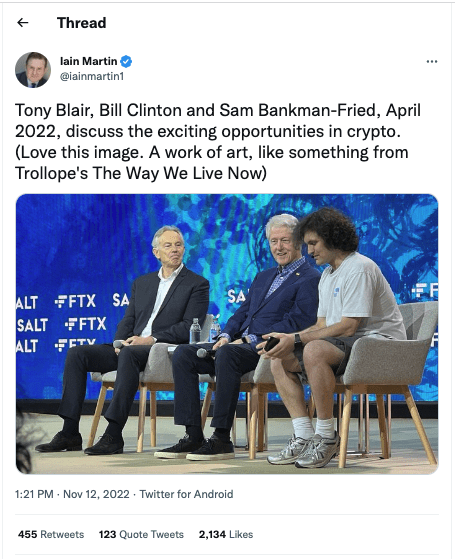 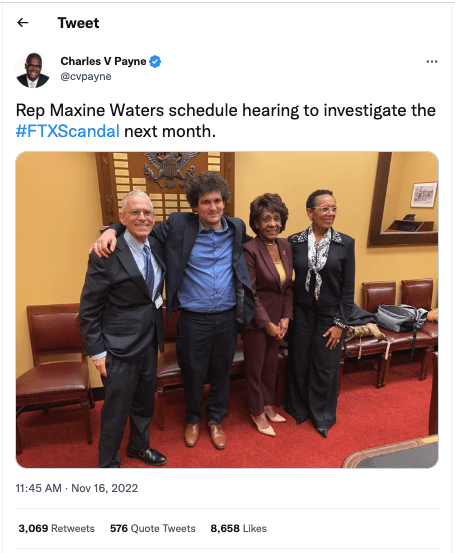 Now, how’s that for the pedigree of the key FTX crypto criminals in this “Caper of the Century”.

Wait, it gets worse … MUCH WORSE … but those radioactive crime scene details are still being verified by our super sleuths who operate in the realm of crypto criminality investigations.  That crypto CONS statistically represent an extremely disproportionate share of crime waves relative to every other financial market can only be BY PURPOSEFUL DESIGN… … … YES!

So, what are the key takeaways at this early stage of the FTX criminal investigation. As follows:

• The highly orchestrated FTX black operation was coordinated by the U.S. Intelligence Community at the behest of the New World Order globalist cabal in order to further collapse the entire cryptocurrency marketplace, once and for all. This particular probe is still developing.

• The FTX crypto con was designed to steal tens of millions of dollars from crypto suckers in order to fund various Democrat-directed vote fraud and election theft schemes. This criminal activity, both electoral and financial, is also at a rudimentary stage of investigation.

• The FTX money laundering operation was used as a vehicle for funds sent to Kiev to be funneled back into the campaign coffers of Democrat and RINO candidates who were guaranteed to financially support Ukraine during their war with Russia, and especially with respect to delivering additional military aid and expeditious weapon transfers.

• The FTX scandal was executed in such a way so as to rope in certain VIPs/celebrities, on both the national and international stage, who are viewed either as opponents to the NWO agenda or potential impediments to pivotal pieces of that nefarious agenda.  Another angle is this: that the growing list of celebrities includes Tom Brady, Steph Curry, Brady’s supermodel ex-wife Gisele Bundchen, comedian Larry David and tennis star Naomi Osaka, which indicates that some of these folks were likely singled out because they were just suckers, plain and simple.

• This extremely elaborate FTX scam was operationally perpetrated by a massing of millennials, many of whom were intentionally domiciled in the Bahamas. Of course, as always, these kids were pawns and puppets in the hands of the real perps whom the millennials, in all likelihood, did not even know were pulling their strings. In any event, these wiseguy millennials were set up to take a YUUUUUGE fall as a means of humbling the whole generation for reasons that are well beyond the scope of this exposé.

• The FTX crypto fraud grew so fast and furiously that it became heavily involved in every corner of the crypto space. Because of this meteoric growth, the totally fraudulent FTX cryptocurrency exchange became associated with some of the biggest names in and out of high finance, Big Government, and the celebrity society. In this way, FTX was meant to interpenetrate many more crypto firms so that a domino effect would occur once it underwent a free-fall collapse. While the general confidence in crypto has been severely shaken, it remains to be seen just how much damage to the industry has been done.

• The longer this Sam Bankman crypto clusterf*ck and Caroline Ellison clown show continues, the more the hidden objectives of this meticulously controlled demolition will be revealed.  As previously stated, that Sam “Humpty Dumpty” Bankman fell so hard during the final days of the 2022 midterm election cycle is clearly no accident. 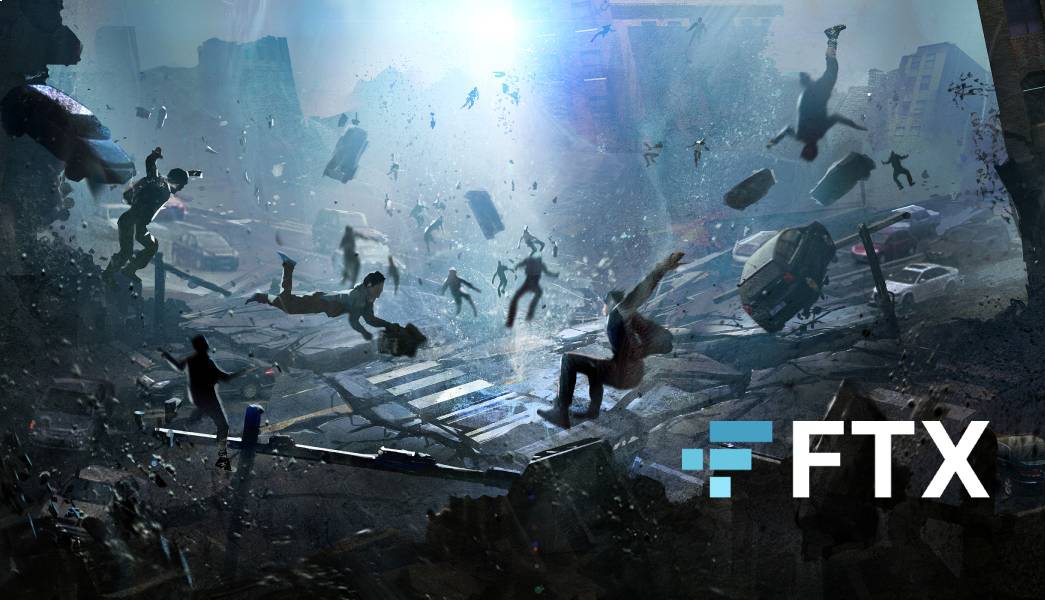 This thing is only just getting started.

However, because of exactly when this show began during Election Week, it’s now self-evident that the true perpetrators orchestrated the crash and burn of FTX as a major distraction from the still ongoing election thefts being carried out by the Democrat Party nationwide.

However, it would seem counter-intuitive that such a dramatic collapse would be intentional given that so much pervasive corruption and profound criminality would be forever exposed, and especially exposing the Democrat/RINO Uniparty.

Therefore, there can be only one firm conclusion: This “Khazarian Crypto CON of the Century” has multiple goals, some of which are yet to be revealed.  Nevertheless, future events will inevitably uncover the concealed motives of the Khazarian Cabal.  In the meantime, however, they are quite purposefully using this “super dramatic FTX crime wave gone tsunami” to significantly advance their Great Reset.

Remember, the Khazarian Cabal’s main mission is to foist a standardized, internationally accepted CBDC* upon the whole world community of nations post-haste.  For the successful implementation of that pivotal piece of the New World Order agenda will totally transform the entire planetary civilization into a financial prison and economic penitentiary overseen by the Khazarian’s long-planned One World Government.

The Armchair Crypto Analyst
State of the Nation
November 17, 2022

SOTN Editor’s Note: What really makes this crypto scandal so radioactive is the list of very powerful and wealthy elites who are directly related to the FTX-Alameda principals.  The pull-stringing power elite always remain completely hidden, yet many of them have been completely exposed by the FTX collapse.  Names like theirs are usually never seen in such a damaging context. (By the way, isn’t it awfully suspicious that those BIG names have been barely mentioned by the mainstream media since the filed FTX bankruptcy?!)  Which means that the snake of predatory capitalism is not only eating its own head right now, the Father of Lies is willing to out many of his minions — BIG and small — as long as the most malevolent of the Archon-obeying Khazarian criminals are not made public. See: The Many Deep Connections between Sam Bankman-Fried & FTX and the World’s Power Elite (Video)