DO NOT TAKE ANY COVID-19 TEST!

DO NOT TAKE ANY COVID-19 TEST! Banned from Military; Can be FORCIBLY Taken from home! 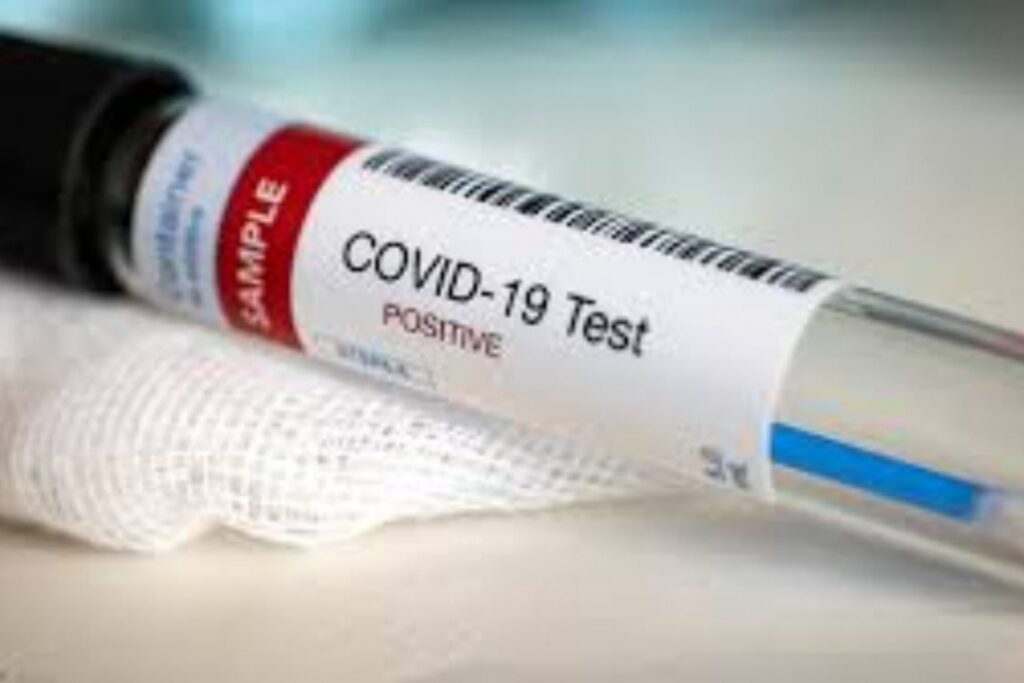 With all the news about coronavirus and its disease COVID-19, a lot of people are thinking about being tested.  DON’T!

Firstly, if you’re not sick – or if you recovered- there is NOTHING that can be done about the virus.  If you get tested and it comes back “positive” there is no definitive medical treatment or cure. You achieve nothing being tested.

The down side of getting tested is far worse . . .

As the Defense Department negotiates its way through the coronavirus pandemic and its fallout, military entrance processing stations (MEPCOM) are working with new guidance when it comes to bringing COVID-19 survivors into the services.

A past COVID-19 diagnosis is a no-go for processing, according to a recently released MEPCOM memo circulating on Twitter.

“During the medical history interview or examination, a history of COVID-19, confirmed by either a laboratory test or a clinician diagnosis, is permanently disqualifying …” the memo reads. 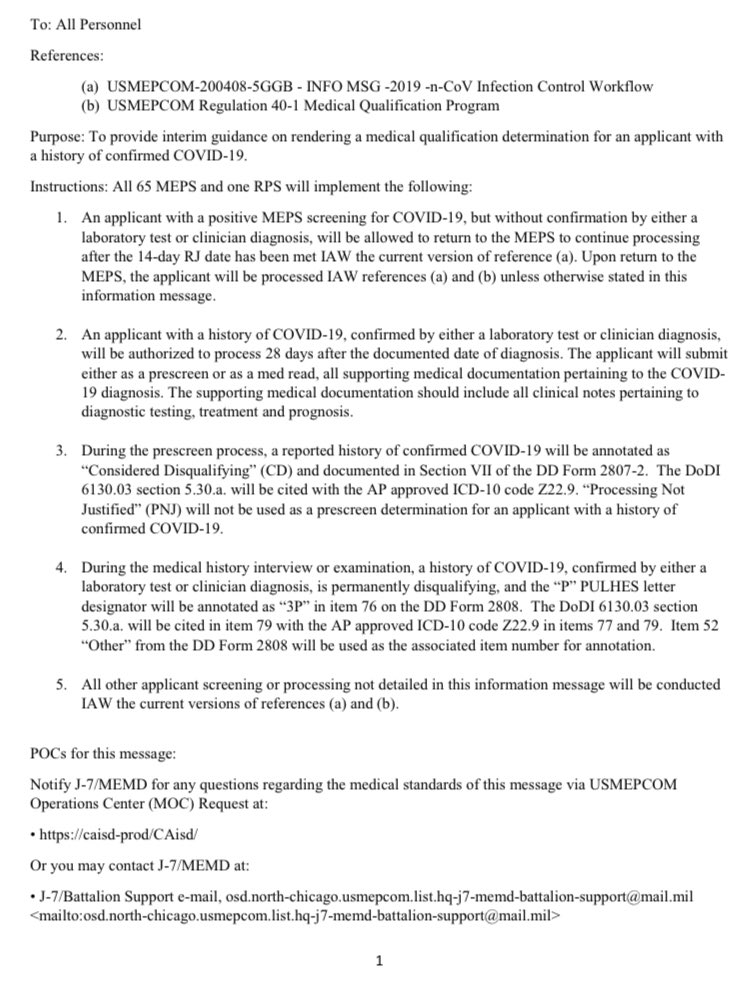 Specifically, it lays out guidelines for MEPS staff to deal with potential, as well as confirmed, coronavirus cases. That starts with screening at all MEPS, which includes taking a temperature and answering questions about symptoms and potential contact.

If an applicant fails screening, according to the memo, they won’t be tested, but they can return in 14 days if they’re symptom-free. Anyone who has been diagnosed with COVID-19 will have to wait until 28 days after diagnosis to report to MEPS.

Upon return, a diagnosis will be marked as “permanently disqualifying” for accession. Recruits can apply for waivers for all permanently disqualifying conditions, including surviving COVID-19. However, without any further guidance for exceptions dealing with COVID-19, a review authority would have no justification to grant a waiver.

Maxwell declined to explain why a coronavirus diagnosis would be permanently disqualifying, compared to other viral, non-chronic illnesses that do not preclude military service.

HAL TURNER REMARK: This . . . this right here, where they will not explain WHY  it is permanently disqualifying  . . . proves they KNOW something about this illness they’re not telling anyone!

However, given the limited research on COVID-19, there are likely a few factors that military medical professionals are trying to hash out when it comes to recruiting survivors: Whether respiratory damage from the virus is long-lasting or permanent, and whether that can be assessed; the likelihood of recurring flare-ups, even if someone has had two consecutive negative tests; and the possibility that one bout of COVID-19 might not provide full immunity for the future, and could potentially leave someone at a higher risk to contract it again, perhaps with worse complications.

The move comes as the services prepare for a surge of post-graduation recruits during the summer and fall high season.

FORCIBLY REMOVED FROM YOUR HOME AND FAMILY!

Another  H U G E “downside” to even getting tested, is that self-anointed do-gooders in various public health agencies, are now revealing they may decide it’s best to TAKE any infected family member out of their home and away from family, “for everyone’s protection.”

This would include taking your children!

WHAT WOULD YOU DO if your six year old son or daughter tested positive for COVID19 and was taken from your home to a quarantine center by Ventura Health Authorities? This SHOCKING VIDEO demands that you plan ahead. #BeBrave #HistoryRepeating pic.twitter.com/e5RC7dCO7o

They call it “Contact Tracing” and justify it as a way to “protect people.”

Many folks say “Thanks but no thanks.”

Others are more assertive, saying they would “not allow” any government to take their family member against that family member’s will, and some have gone so far as to say “if they have to shoot (such government officials) who attempt any such thing, they will.”

This is why folks are being advised by many in the private sector NOT to be tested for COVID-19.   IF you are voluntarily tested, they can CLAIM whatever they want about your results.  And if you’re a political adversary, or a member of some group the government doesn’t like, they can now take that test result and use it to steal your freedom and use force against you to do it.

Word is already spreading like wildfire in the private sector, with people telling family, friends and neighbors “Don’t give them any “evidence” to use against you or your family.  Don’t get tested.”

Interestingly, BEFORE THIS OUTBREAK EVEN BECAME AN OUTBREAK . . . . the New York State Legislature already had a Bill filed to . . . . TAKE PEOPLE BY FORCE! (Gee, what a coincidence):

(Relates to the removal of cases, contacts and carriers of communicable diseases who are potentially dangerous to the public health)

§ 2120-A. REMOVAL AND DETENTION OF CASES, CONTACTS AND CARRIERS WHO ARE OR MAY BE A DANGER TO PUBLIC HEALTH; OTHER ORDERS.

1. THE PROVISIONS OF THIS SECTION SHALL BE UTILIZED IN THE EVENT THAT THE GOVERNOR DECLARES A STATE OF HEALTH EMERGENCY DUE TO AN EPIDEMIC OF ANY COMMUNICABLE DISEASE.

2. UPON DETERMINING BY CLEAR AND CONVINCING EVIDENCE THAT THE HEALTH OF OTHERS IS OR MAY BE ENDANGERED BY A CASE, CONTACT OR CARRIER, OR SUSPECTED CASE, CONTACT OR CARRIER OF A CONTAGIOUS DISEASE THAT, IN THE OPINION OF THE GOVERNOR, AFTER CONSULTATION WITH THE COMMISSIONER, MAY
POSE AN IMMINENT AND SIGNIFICANT THREAT TO THE PUBLIC HEALTH RESULTING IN SEVERE MORBIDITY OR HIGH MORTALITY, THE GOVERNOR OR HIS OR HER DELEGEE, INCLUDING, BUT NOT LIMITED TO THE COMMISSIONER OR THE HEADS OF LOCAL HEALTH DEPARTMENTS, MAY ORDER THE REMOVAL AND/OR DETENTION OF SUCH
A PERSON OR OF A GROUP OF SUCH PERSONS BY ISSUING A SINGLE ORDER, IDENTIFYING SUCH PERSONS EITHER BY NAME OR BY A REASONABLY SPECIFIC DESCRIPTION OF THE INDIVIDUALS OR GROUP BEING DETAINED. SUCH PERSON OR GROUP OF PERSONS SHALL BE DETAINED IN A MEDICAL FACILITY OR OTHER APPROPRIATE FACILITY OR PREMISES DESIGNATED BY THE GOVERNOR OR HIS OR HER DELEGEE AND COMPLYING WITH SUBDIVISION FIVE OF THIS SECTION.”

As shown above in red, if you’ve even been IN CONTACT with someone who wasn’t sick, but tested positive, they will be able to TAKE YOU BY FORCE!

And if any “official” comes to ask you questions, assert your Constitutional Right to REMAIN SILENT.

Say “I assert my right to remain silent as protected by the Fifth Amendment to the Constitution of the United States.  I will not answer any questions. I want you to leave me alone”  and then YOU shut up.

If they persist, re-state “I have invoked my right to remain silent.  Leave now.”  (Article continues below Ad)

TESTS THEMSELVES INFECTED WITH COVID!

As the new coronavirus took root across America, the US Centers for Disease Control and Prevention sent states tainted test kits in early February that were themselves seeded with the virus, federal officials have confirmed.

After the CDC first sent its test kit to states in early February, it took the agency around a month to fix the problem. By then, the virus had invaded many communities unimpeded, and any chance that the US had at containing its spread had virtually vanished. By mid-March, many states turned to mitigation efforts, such as social distancing, to try to blunt—rather than prevent—the life-threatening, healthcare-overwhelming effects of COVID-19.

“It was just tragic,” Scott Becker, executive director of the Association of Public Health Laboratories, told the New York Times. “All that time when we were sitting there waiting, I really felt like, here we were at one of the most critical junctures in public health history, and the biggest tool in our toolbox was missing.”

One wonders how many people GOT INFECTED by taking the test?

Will that be YOU?