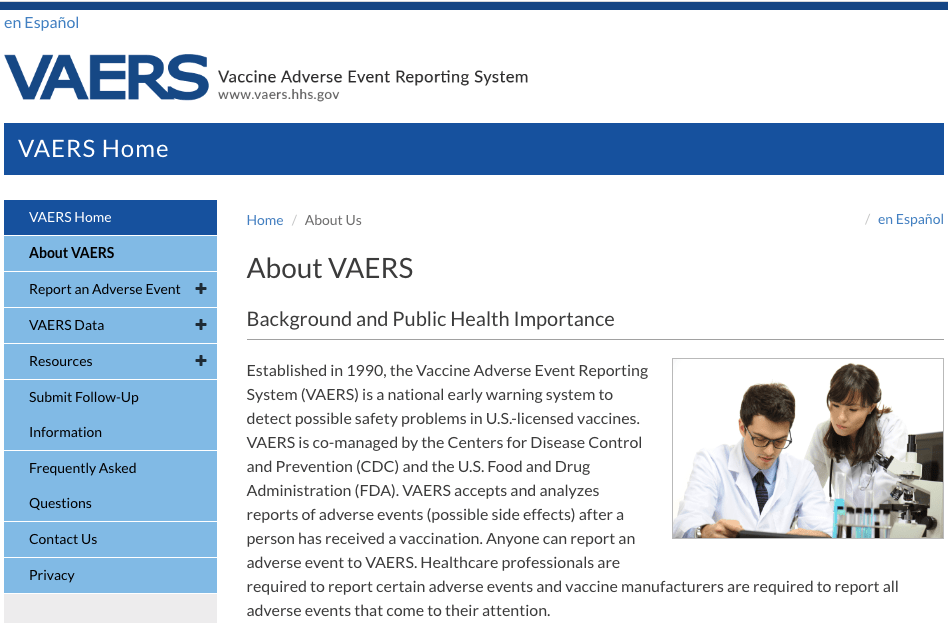 Let the official yet highly under-reported
government data, regarding COVID-19
vaccine-induced deaths and injuries,
present its own very compelling case for
the well-planned and highly organized
genocide-in-progress.

It’s of paramount importance to understand that every single physician and scientist in America has access to the official government data and information posted on the VAERS website.

Likewise, every department throughout the U.S. Federal Government, the U.S. Armed Forces and all affiliated NGOs have free access to VAERS. Which means that the NIH, CDC, FDA, and entire HHS can consult the most up-to-date vaccine injury and death data at this website: https://vaers.hhs.gov/.

Similarly, every public corporation and private company, every medical center and hospital, every healthcare insurance company and risk management firm, every university and college, every research institution and non-profit foundation, etc. has full and free access to the VAERS public database.

In light of these indisputable facts, willful ignorance of the exceedingly important VAERS hard data/info is no excuse for not immediately responding to the true cause of the mass death occurring across the USA today. For every individual, who is directly or indirectly associated with the administration of the COVID-19 ‘vaccines’ in any official capacity, is now well aware of how extremely dangerous and deadly the jabs truly are.

So, let’s keep this critical analysis simple and short.

First, exactly what exactly is VAERS?

The Vaccine Adverse Event Reporting System (VAERS) is a United States program for vaccine safety, co-managed by the U.S. Centers for Disease Control and Prevention (CDC) and the Food and Drug Administration (FDA). VAERS is a postmarketing surveillance program, collecting information about adverse events (possible harmful side effects) that occur after administration of vaccines to ascertain whether the risk–benefit ratio is high enough to justify continued use of any particular vaccine.[1]

*The following table of vaccine injury and death hard data was captured precisely as it was published on the VAERS website. 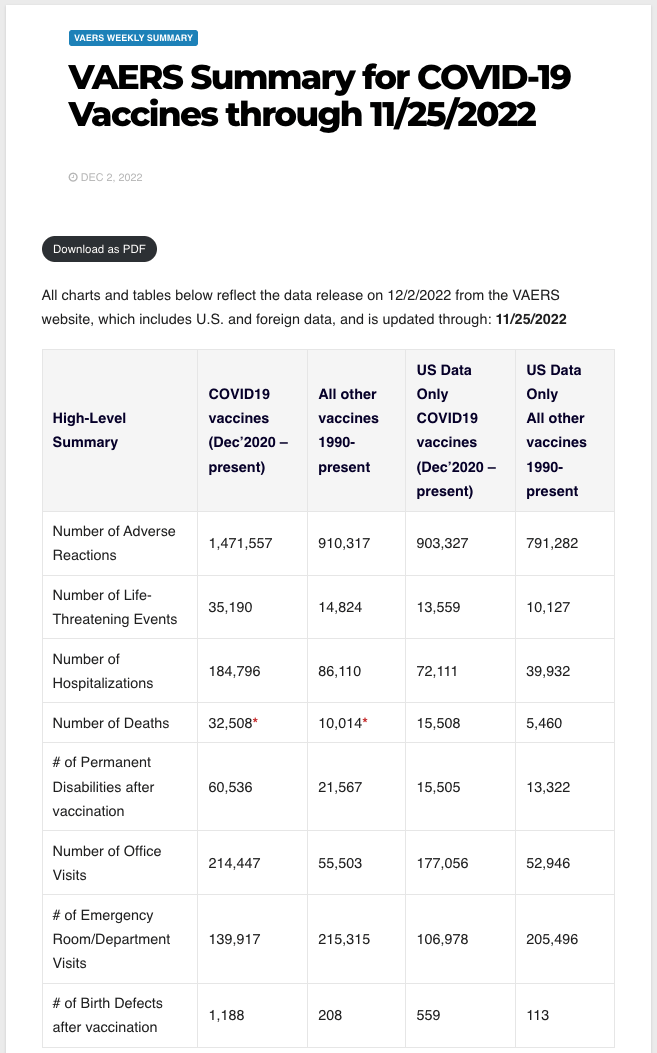 According to the official VAERS data shown in the table above, it was reported that there were 15,508 U.S. deaths directly attributed to the various Covid ‘vaccines’ as of November 25, 2022.

In light of the established fact, as well as official government stated position, that reported VAERS data only represents 1% to 10% of the actual number of vaccine-induced deaths, the real number may be closer to 1,550,800.

UPDATE: There have been official government studies sponsored
by and issued under the auspices of the U.S.Department of Heath
and Human Services which have indicated that the total number
of reported vaccine adverse events is actually less than 1% of the
true number of vaccine injuries. See: According to the Grant Final
Report, “fewer than 1% of vaccine adverse events are reported”.

We rest our case.

And, the preceding presentation of hard evidence conclusively confirms, beyond a shadow of a doubt, that the subtitle of this scathing indictment is absolutely true:

KEY POINT: Throughout the roll-out of the various, there has been an unwritten and unspoken rule throughout American Healthcare System. That rule highly discourages vaccinated individuals from reporting their vaccine injuries to any medical authority or health official. In point of fact, medical doctors and physician specialists, nurse practitioners and physician assistants, RN and LPN nurses, nurses aides and hospital techs as well as all other healthcare providers have been operating under this unwritten code: “Don’t Ask, Don’t Tell.”

EUA = Emergency Use Authorization under FDA rules and regulations.

This key data point alone, that the Covid vaccines were approved for “Emergency Use Authorization” ONLY confirms the institutional intent to kill on a mass scale.  When the Mainstream Media was then used to cunningly deceive the general public that the vaccines were finally approved by the FDA (which they were not) and were no longer just EUA-classified, the institutional mens rea became even more clear.

However, the irrefutable proof of a highly coordinated criminal conspiracy to commit crimes against humanity occurred when the very first unlawful mandate was put into force. By ordering Covid vaccine mandates across America for an extremely risky and highly experimental mRNA biotechnology jabs, the hard proof of premeditated mass murder was established.

At this late date, the volumes of hard evidence — over and above the VAERS data — conclusively demonstrates that Covid vaccinations are exceedingly hazardous and often fatal.  Hence, the weaponized Covid injections were clearly formulated as a mass extermination scheme, especially when they were unlawfully mandated across institutional America.

In view of the extremely aggressive government, corporate, university, and NGO campaigns to mandate Covid vaccinations throughout every sphere of life in America, this ongoing criminal conspiracy to effectuate a massive depopulation of the United States has exposed itself.

In other words, in the face of so much Covid vaccine-caused murder and maiming, disease and injury, illness and debilitation, the perpetrators have built a prima facie case against themselves proving an ongoing intentional genocide of the American people.

BOTTOM LINE: This egregious crime spree against the American people was perpetrated to collapse of the U.S. Healthcare System as just one prong of a multi-pronged strategy and highly coordinated conspiracy to collapse the American Republic.