SCOTUSgate: Chief Justice John Roberts & Lawyer Wife Jane Sullivan Do Not Work for the America People—But who then? 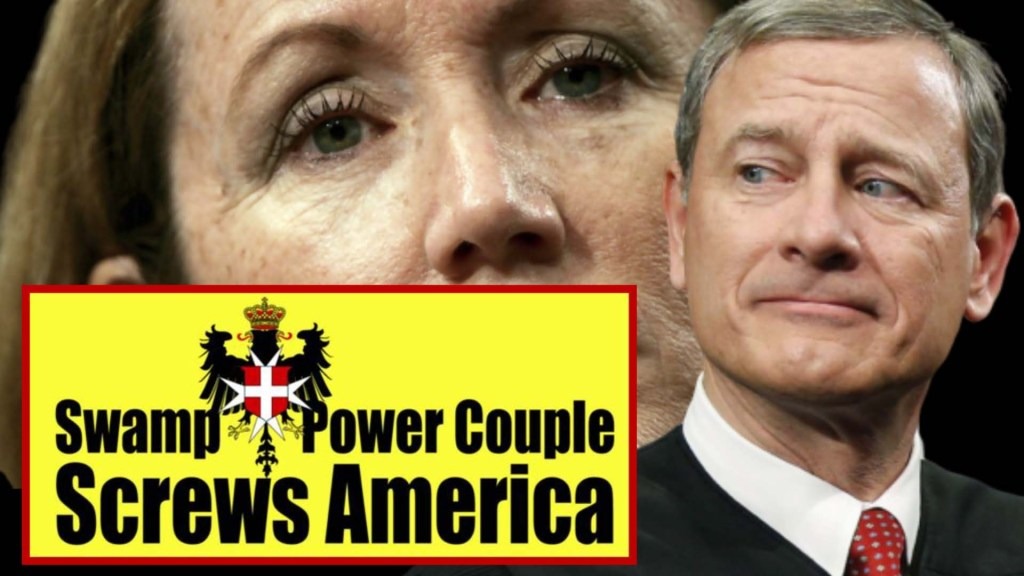 We updated you on John Robert’s wife – Jane Sullivan Roberts who recruits for the Senior Executive Services and is a member of the Knights of Malta, the organization that owns Chief Justice John Roberts.

Jane Sullivan Roberts is a Jesuit. Read about her Knights of Malta connections.

Jane Sullivan Roberts consults for many of the leading Pilgrims Society companies on the planet, in satellite technology, law and big pharma

We have reported on how rotten to the core Roberts is:

Today we report that all the puzzle pieces are falling into place as these two Knights of Malta operatives – Roberts and Sullivan give themselves away as traitors of the United States with Robert’s recusal to hear an important case filed by an American inventor.

How can this Court impeach Dr. Aranachalam as “frivolous or malicious” for merely raising the factual subject of Chief Justice Roberts’ relationship to the Knights of Malta, and all that this implies regarding the Pope of Rome, the British Monarch, the Inns of Court in Britain and the United States, SERCO and QinetiQ?

She has a petition before the U.S. Supreme Court now that simply asks the Court to protect her property Arunachalam v. Lyft, Inc. No. 19-8029 from the patent “reexamination” scam (excuse for theft of invention by deep pocket infringers) that Obama put in place in the euphemistically named the “American Invents Act” (Sep. 16, 2011).

Dr. Arunachalam merely questioned Chief Justice Roberts’ suitability to hear lawsuits of any kind given what appeared to be a seditious relationship with the Knights of Malta.

In response to this question, Roberts immediately recused himself from the question. The other justices then labelled Dr. Arunachalam’s question “frivolous or malicious” and then used that accusation as their justification to throw out her entire petition asking the court to protect her patent property rights!

The Remaining Justices Are Silent About Justice Roberts’ Many Conflicts

The remaining Justices were silent about Chief Justice Roberts’ membership in the Knights of Malta, and Jane Sullivan Roberts’ relationships with just about every corporation and law firm in the country in her company. According to a former federal prosecutor, the other justices are committing “misprision of treason” (the deliberate concealment of one’s knowledge of a treasonable act or a felony) and have thus also disqualified themselves in Dr. Arunachalam’s cases. For lawyers, here’s a legal citation: ALP VOL. 12. CONST. LAW, CH. VII, SEC. 1, §141. With respect to Fundamental, Substantive, and Due Process Itself:

Dr. Arunachalam has just today responded with a petition for rehearing, arguing that the dismissal of her petition is tantamount to punishing her for daring to asking about Justice Roberts’ suitability to be involved in her case.

“Frivolous” and “Malicious” have legal standards before they can be sustained. A frivolous lawsuit, motion, or appeal lacks any basis and is intended to harass, delay, or embarrass the opposition. “Malicious” means substantially certain to cause injury, being deliberately harmful or spiteful, without just cause or excuse.

She had asked the court to waive the requirement that she must hire a D.C. attorney to file her petition—easily a $10-15,000 minimum fee. In the same request she was required to submit her petition in advance. She also asked if Justice Roberts was associated with the Knights of Malta, since such a relationship should disqualify him from considering her petition.

Her question was triggered by new information, newspaper articles and photos that had come her way showing that Justice Roberts had flown to the little island of Malta after he had delivered his stunning and unexpected reversal on Obamacare (ruling it a tax and not insurance). The photo shows him arriving in a black car in front of the Knights of Malta office.

In her motion for rehearing, Dr. Arunachalam provides a surprising level of detail about the Knights of Malta and its relationships to the Pope, British Monarch, Commonwealth, EU and NGOs.

She also argues that her question cannot be frivolous since it triggered a recusal from Chief Justice Roberts, which he would have had no reason to do if it was frivolous and lacked basis.

She argues that her question cannot be malicious since it was a legitimate factual question to determine a judge’s suitability, ethically, to hear a case. Such questions, if brought on by the judge’s own conduct, do not shield a just for legitimate inquiry since obviously, if it is wrongdoing, by nature might be harmful to the judge’s reputation once discovered.

The astounding development in Justice Roberts’ recusal is an admission that he HAS a relationship with the Knights of Malta that triggered his recusal.

U.S. Government officials engage in sedition when they conspire with foreign powers against the People of the United States. As. Dr. Arunachalam motions shows, the Knights of Malta is a sovereign state that reports to the Pope of Rome, and to which the British Monarch pledged fealty.

These foreign entanglements by a sitting U.S. judge are seditious by nature and prohibited by the U.S. Constitution and common sense.

Here are the photos included in Dr. Arunachalam’s Exhibit A.

Citizens and inventors are fed up with the corruption at the Supreme Court, especially as it relates to PATENT PROTECTION. In a devastating petition, patriot inventor reveals Robert’s connections to the Knights of Malta. John Roberts shows, once again, how he sells out American inventors, just like he did with Leader Technologies.

The clerks at the Supreme Court have pushed back on this filing, indicating that the case is frivolous and that the petition will not be accepted.

Besides Chief Justice Roberts’ relationship to the Knights of Malta, et al, he is also profoundly conflicted in Dr. Arunachalam’s patent infringement cases through his wife Jane Sullivan Roberts as a leading partner in Major Lindsey & Africa LLP.

.Read more about SCOTUS John Roberts and how he works for the Queen and not for America. He is known as a CROWN AGENT. He must be impeached.