Coronavirus: Trump terminates US relationship with WHO 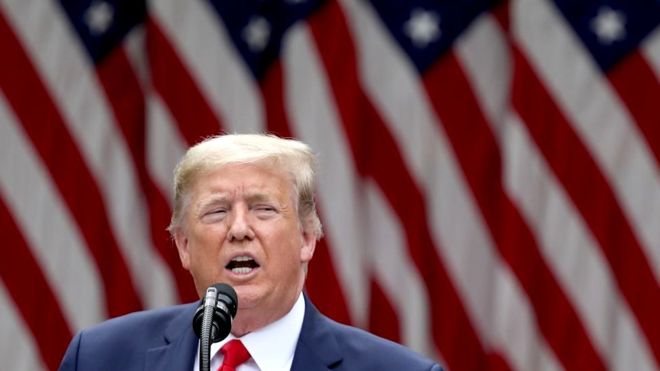 US President Donald Trump has announced that he is terminating the country’s relationship with the World Health Organization (WHO).

The president has accused the WHO of failing to hold Beijing to account over the coronavirus pandemic.

“China has total control over the World Health Organization,” the president said while announcing measures aimed at punishing Beijing.

Washington will redirect funds to other bodies, he said.

The WHO, a UN agency that helps countries promote healthcare and tackle outbreaks of disease, is yet to comment on Mr Trump’s decision.

But on Saturday, the European Union led calls for the Trump administration to reconsider its decision, warning it could hamper global efforts to tackle the coronavirus pandemic.

Mr Trump announced last month that he was going to halt US funding for the WHO unless it undertook “substantive improvements” within 30 days.

The WHO’s Director-General, Tedros Adhanom Ghebreyesus, has promised a review of its response to the pandemic and defended its independence. 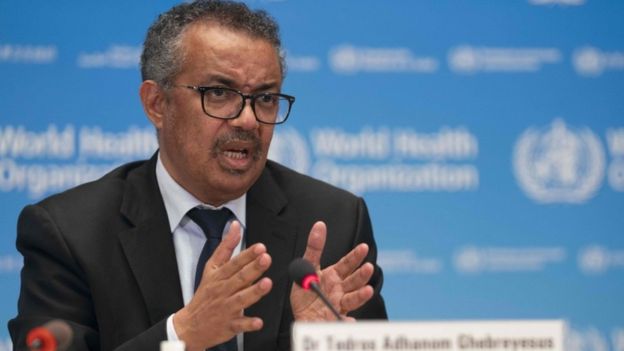 Other countries, including Germany and the UK, have said they have no intention of withdrawing funding from the WHO, which is co-ordinating a global initiative to develop a vaccine against Covid-19.

Mr Trump, who is campaigning for re-election this year and has been criticised for his own handling of the pandemic, has blamed China for trying to cover up the coronavirus outbreak.

More than 102,000 people in the US have lost their lives to Covid-19 – by far the biggest death toll in the world.

What did Trump say?

“We will be today terminating our relationship with the World Health Organization and directing those funds” to other global public health charities, Mr Trump said in the White House Rose Garden.

“The world is now suffering as a result of the malfeasance of the Chinese government,” he said.

He added that China had “instigated a global pandemic that has cost over 100,000 American lives”.

The president accused China of pressurising the WHO to “mislead the world” about the virus, without giving evidence for his allegations.

What is the WHO – and who funds it?

What’s the background to this?

Mr Trump’s criticism of the WHO’s handling of the pandemic began last month when he threatened to permanently withdraw US funding, suggesting the UN health agency had “failed in its basic duty” in its response.

“It is clear the repeated missteps by you and your organisation in responding to the pandemic have been extremely costly for the world,” he wrote in a letter to the WHO’s chief on 18 May.

He later labelled the WHO a “puppet of China”.

China has accused the US of being responsible for the spread of the virus on its own soil, attributing the outbreak to American “politicians who lie”.

Earlier this month, Chinese Foreign Ministry spokesman Zhao Lijian said Mr Trump was trying to mislead the public, smear China and “shift the blame for [the US’s] own incompetent response”.

WHO member states have since agreed to set up an independent inquiry into the global response to the pandemic.

What reaction has there been to Mr Trump’s decision?

There has been much concern among health experts and politicians, many of whom fear Mr Trump’s decision will impede global efforts to bring the pandemic under control.

On Saturday, the EU issued a joint statement from its Commission President Ursula von der Leyen and foreign affairs chief Josep Borrell, who urged the US to think again.

It said for the WHO to fight pandemics effectively, “the participation and support of all is required and very much needed”.

“We urge the US to reconsider its announced decision,” the statement added.

That's a disappointing backlash for International Health. If @WHO shall make any difference for the future it needs reform. And the EU must take a leading role and engage more financially. That's one of our @BMG priorities for our EU presidency. #EU2020BMG

In the US, there has been criticism from across the political spectrum.

Republican Senator Lamar Alexander said he disagreed with the president’s decision because, without US funding, clinical trials to develop a coronavirus vaccine could be disrupted.

“Certainly there needs to be a good, hard look at mistakes the World Health Organization might have made in connection with coronavirus, but the time to do that is after the crisis has been dealt with, not in the middle of it,” the chair of the US Senate Health Committee said.