How are children being exposed to this extremely inappropriate content for 9 straight minutes?! 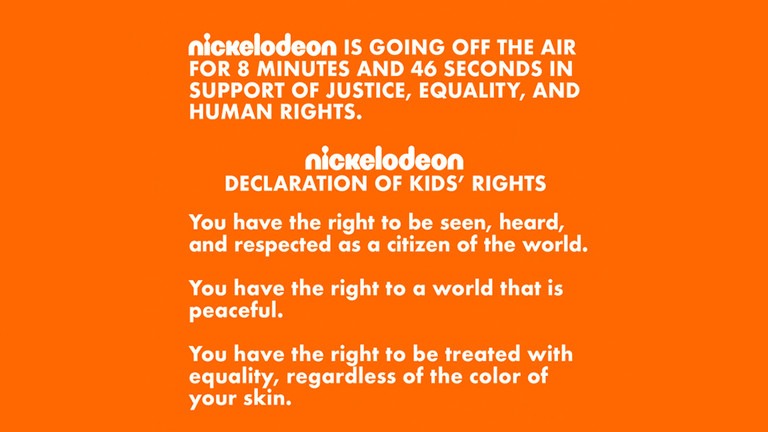 Children’s TV network Nickelodeon went silent for nearly nine minutes as a gesture of support for the Black Lives Matter movement. But pushing social-justice rhetoric on such a young audience has rubbed many the wrong way.

The channel, owned by Viacom, stopped its transmission for eight minutes and 46 seconds on Tuesday “in support of justice, equality, and human rights,” presenting children with a black screen on which the phrase “I can’t breathe” faded in and out, timed with audio of a person breathing. That spot was preceded by a promotion scrolling Nickelodeon’s “Declaration of Kids’ Rights” over an orange background and a pledge to “stand in solidarity” with “Black colleagues, creators, partners, and audiences” while condemning racism and violence.

The clip finished by urging viewers to “Join @colorofchange and countless others to call on public officials across the country to take real action,” and included a number to text for more information.

Some found it “powerful,” declaring that Nickelodeon had done more than the government and other celebrities by reaching out to young people.

A kid's network is doing more for our country than the actual government and several big name celebrities. Thank you Nickelodeon for lending a hand in these hard and trying times. pic.twitter.com/VGzNF28imO