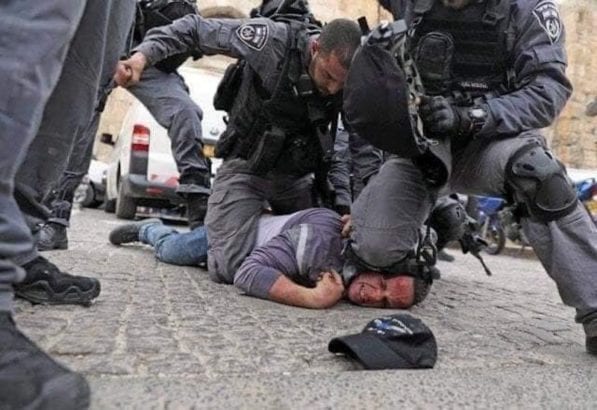 Over 100 Minnesota law enforcement officers attended a 2012 conference organized by the Israeli consulate in which Israeli police trained them. Israeli forces often use the knee-on-neck restraint on Palestinians. Israel has been training law enforcement officers around the US for many years… (Meanwhile, Congress is poised to pass a bipartisan $38 billion package to Israel)… Read four reports below:

Officers from the US police force responsible for the killing of George Floyd received training in restraint techniques and anti-terror tactics from Israeli law-enforcement officers.

Mr Floyd’s death in custody last Monday, the latest in a succession of police killings of African Americans, has sparked continuing protests and rioting in US cities.

At least 100 Minnesota police officers attended a 2012 conference hosted by the Israeli consulate in Chicago, the second time such an event had been held.

There they learned the violent techniques used by Israeli forces as they terrorise the occupied Palestinian territories under the guise of security operations.

The so-called counterterrorism training conference in Minneapolis was jointly hosted by the FBI.

Israeli deputy consul Shahar Arieli claimed that the half-day session brought “top-notch professionals from the Israeli police” to share knowledge with their US counterparts.

It is unclear whether any of the officers involved in the incident in which Mr Floyd was killed attended the conference.

But in a chilling testimony, a Palestinian rights activist said that when she saw the image of Derek Chauvin kneeling on Mr Floyd’s neck, she was reminded of the Israeli forces’ policing of the occupied territories.

Neta Golan, the co-founder of International Solidarity Movement (ISM) said: “When I saw the picture of killer cop Derek Chauvin murdering George Floyd by leaning in on his neck with his knee as he cried for help and other cops watched, I remembered noticing when many Israeli soldiers began using this technique of leaning in on our chest and necks when we were protesting in the West Bank sometime in 2006.

“They started twisting and breaking fingers in a particular way around the same time. It was clear they had undergone training for this. They continue to use these tactics — two of my friends have had their necks broken but luckily survived — and it is clear that they [Israel] share these methods when they train police forces abroad in ‘crowd control’ in the US and other countries including Sudan and Brazil.”

Israeli training of US police is widespread

The training of US police officials by Israeli forces is widespread.

Even Amnesty was compelled to report that hundreds of police from Florida, New Jersey, Pennsylvania, California, Arizona, Connecticut, New York, Massachusetts, North Carolina, Georgia, Washington state and Washington DC had been flown to Israeli for training.

Thousands more have been trained by Israeli forces who have come to the US to host similar events to the one held in Minneapolis. According to the somewhat selective rights organisation, many of these trips are taxpayer-funded, while others are privately funded.

Since 2002 the Anti-Defamation League, the American Jewish Committee’s Project Interchange and the Jewish Institute for National Security Affairs have paid for police chiefs, assistant chiefs and captains to train in Israel and the Occupied Palestinian Territories (OPT), it said.