The fraudulent HCQ study published by Lancet was a purposeful plot to undermine hydroxychloroquine as a COVID-19 cure. 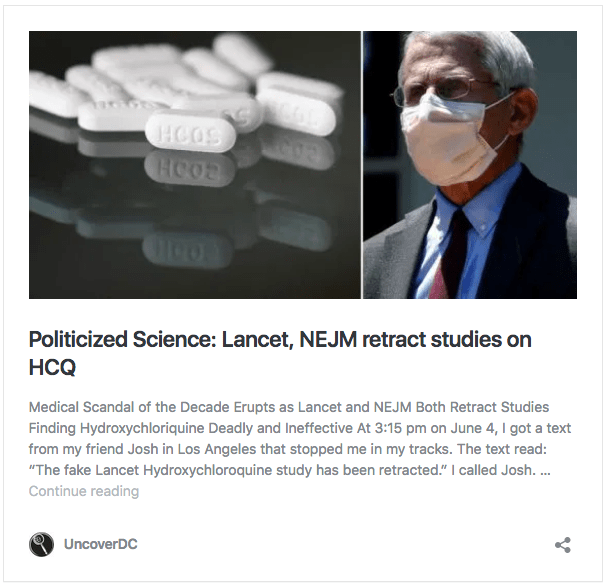 My latest article at www.UnCoverDC.com breaks down the biggest medical scandal in a decade:

Yeah, during all the countless hours, during the months I’ve spent zooming in on the hideously perverse so-called “studies” done for the OBVIOUS purpose of demonizing anything that’s pro-HCQ, I’ve been waiting, with confidence that somehow (SOMEHOW!) the whole castle of sand constructed by the utterly stupid smear-bullies who’ve been determined to turn HCQ into a heresy, would eventually/inevitably be smashed to smithereens by the long-standing/long-swelling tsunami wave of FACTS which incontrovertibly, conclusively, undeniably AND unavoidably validate, affirm and immutably immortalize HCQ’s efficacy and safety.

Be that as it may, in the here and now of the apparently-imminent surging onset of that smashing of the said sand castle, I am yet still bewildered by one mystery which has baffled and bothered me since before (and during) Donald Trump’s announcement of his pro-HCQ contemplations.

That mystery is as follows:

Why presently (and why in the past) have nearly all the domestic and foreign pro-HCQ institutions, academics, physicians, and members of the political class, including Donald Trump, been ONLY articulating and advocating for HCQ’s use as ONLY a singular medicinal modality, or as ONLY a medicinal to be combined with ONLY an additional pharmaceutical compound (usually Azithromycin or a similar azalide/macrolide)?

Why presently (and why in the past) have nearly all the domestic and foreign pro-HCQ institutions, academics, physicians, and members of the political class, including Donald Trump, been absolutely silent about THE FACT that hydroxychloroquine achieves its success against the Coronavirus by functioning as the zinc ionophore, i.e., by transporting zinc into the cell, thereby initiating zinc’s incomparably-devastating and absolutely-undefeatable lethality against the virus’s intracellular gene-transcription pathogenicity?

That mystery has me baffled and bothered (quite-irritatingly perplexed, I’d even say).

Why have so many who SHOULD know, or who SHOULD have been informed by those who should know, been silent about THE FACT that hydroxychloroquine is just a bit player in the epic virus-slaying process which features the ZINC ION as the hyper-muscular, heavy-hitting, champion sword-thrusting warrior that single-handedly slashes and shreds the virus’s faculties and functionalities, leaving those faculties and functionalities nullified into useless morsels of swiftly-decayed/discarded/disposed intracellular noodles?

THAT is the most important mystery in this whole HCQ matter, because it goes to (and gets to) the ultimate concealment: The concealment of the antiviral mechanism of HCQ itself, the mechanism which requires zinc ions. “Somebody” doesn’t want the zinc ions to be known about, and THAT’S the real root of all the sinister goings-on around HCQ.
_._._._._._._._._._

I’ve been dosing myself with the antiviral Zinc-Ionophore-Plus-Zinc protocol, for around three decades: 1,000 mg of quercetin with 50 mg zinc, daily. During those three decades, I’ve been exposed to every virus out there, including all the coronaviruses. I KNOW THE UNDEFEATABLE LETHALITY that the Zinc-Ionophore-Plus-Zinc protocol has, vis-a-vis the coronaviruses. “Somebody” in the upper echelons of the medical industry knows too, but, that “somebody” (that body of some ill-intentioned somebodies) doesn’t want the wretched masses to have such knowledge and such defense against the viruses.

The mystery of who isn’t telling Donald Trump, and isn’t telling the rest of the vulnerable throngs, about the Zinc-Ionophore-Plus-Zinc protocol, is where the ultimate diabolical unveiling is to be found, regarding the HCQ matter.

It’s an extremely multi-directional, multi-layered rabbit hole, and I have absolutely no hope or faith that anyone is going to break it up and shut it down.

HCQ is *NOT* the cure. IT is merely the transporter of the cure (the ionophore of the cure).