This is how a bolshevik revolution takes place—the communist first take over the police stations! 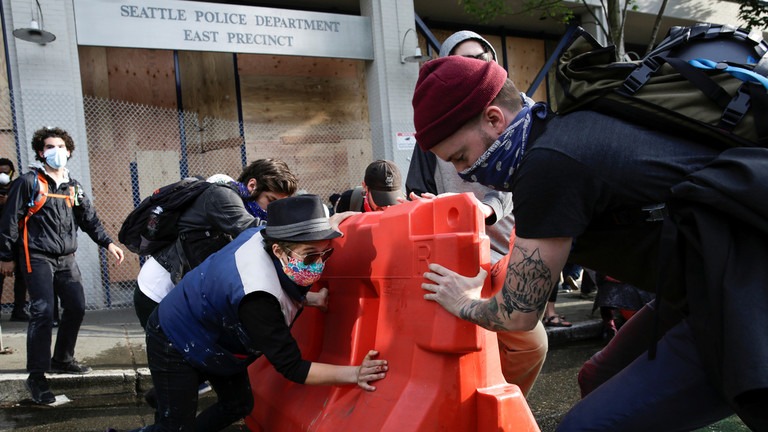 After police in Seattle, Washington retreated from the Capitol Hill neighborhood, protesters took over the abandoned ‘regime’ precinct and erected barricades to mark an ‘autonomous zone’ for several blocks around it.

Six blocks of downtown Seattle have been declared the ‘Free Capitol Hill Zone’ or ‘Capitol Hill Autonomous Zone’ (CHAZ), according to area activists that have taken control of Seattle PD’s East Precinct, on 12th Avenue and E. Pine Street.

Journalist Julio Rosas tweeted photos from the ‘zone,’ including flyers demanding that Seattle PD be defunded, and declaring that police “will always be racist because capitalism requires inequality.”

I’m outside of the Seattle Police Department’s East Precinct for @townhallcom. Police have pulled out of the area and protesters have set up barricades in the streets. They have declared it a “Cop Free Zone.” pic.twitter.com/iYFQ9B4jhz

Protesters have put on the barricades that those coming into the area are “now leaving the USA” and entering the “Cap Hill autonomous zone” or “Free Capitol Hill.” pic.twitter.com/zGNBYAyLOg

Journalist Andy Ngo described the group in control of the area as “Antifa,” and cited tweets to suggest there were armed guards among them.