Simon Riteis a writer based in London for RT, in charge of several projects including the political satire group #ICYMI. Follow him on Twitter @SiWrites 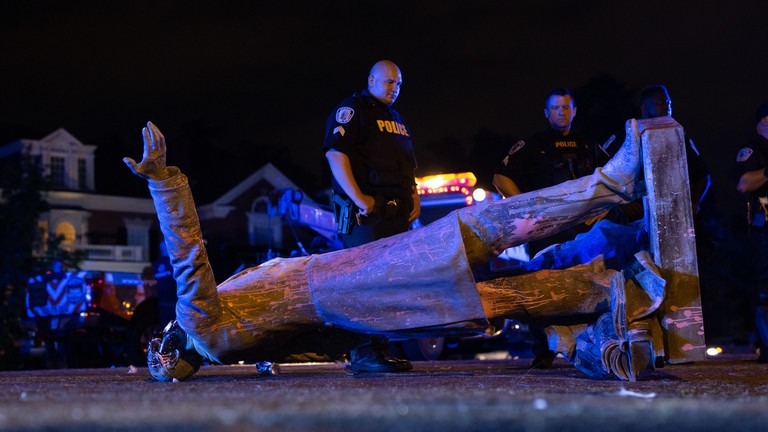 A statue of Confederate States President Jefferson Davis lies on the street after protesters pulled it down in Richmond, Virginia, on June 10, 2020 © AFP / Parker Michels-Boyce

Protesters in Virginia seriously injured one of their own when they pulled down a stone statue onto his head. This unintended tragedy sums up the irresponsible thoughtlessness of their actions.

In summary, an excited crowd mounted a Confederate monument as part of the current wave of statue-felling and pushed a large stone figure onto a man who was standing underneath it, seriously injuring him and reportedly leaving him in a coma. You can see the video below, and it’s worth watching before I get into a lengthy torturing of this metaphor as a warning of where we stand and what might come next.

In the opening few seconds of the video, we see the crowd caught up in the fever of what must seem like a revolution. There’s music playing in the background, and somehow there seems to be a plentiful supply of sledgehammers. Seriously, who buys them?

Anyway, this is the stage where everything is exciting; in the minds of the activists their actions are consequence free, because all they are doing is pulling down the symbols of oppression and racism. It seems likely that a large part of the crowd had only very recently become aware that statues are to blame for, well, everything, but ultimately you don’t want the foot soldiers of revolution thinking too deeply when you’ve given them a sledgehammer and a target.

This is just a smaller version of what’s happening on a larger scale. The calls to abolish police forces, cancel cultural icons and pick apart the historical myths that knot society together seem like a great idea in the fervour of an uprising, but at some point you have to deal with what comes after. For example, there are rumours those anarchists camped out in their own autonomous zone in Seattle are already running out of food, apart from some $6 hot dogs some nasty capitalists are selling.

Which takes us to the unfortunate guy standing underneath the statue as it fell in the next part of the Virginia video. He could very easily be a symbol of what happens next; a victim of the good intentions of the mob.

History shows that pulling down cultural icons can escalate into something very nasty.  Once you’ve pulled down all the statues, and cancelled all the TV shows that have upset someone, what comes next? What if everything isn’t perfect once you’ve purged society of all the elements that have been labelled problematic?

Then you have to go after the real people who aren’t fitting in to the new world order, and where does that end? Well, it could end in someone deciding that YOU have questionable views and suddenly you’re the guy (or gal, or other) who one minute was trying to pull down the statue of hate, and the next minute being crushed underneath it.

My metaphor doesn’t end there though, because keep watching the video and what do you see? The cheering of the wider crowd doesn’t stop immediately, because they are ignorant of what actually just happened. But look at those on the statue, the few that took it upon themselves to climb the edifice and bring it crashing down.

They look down in disbelief at the stricken man, clutching their hammer to their chests, shocked at what they’ve just done. They didn’t see this outcome. They shout and gesture for him to be helped, but there’s nothing they can do now. They acted hastily and feverishly, they didn’t consider the consequences and now it’s too late.

I’m not saying there shouldn’t be debate or even that history shouldn’t be re-evaluated calmly and soberly. What I am saying, though, is that acting violently and unthinkingly can easily leave you crushed by the consequences, or looking down at the destruction and injury you have wrought. You may not see it coming before it’s too late.