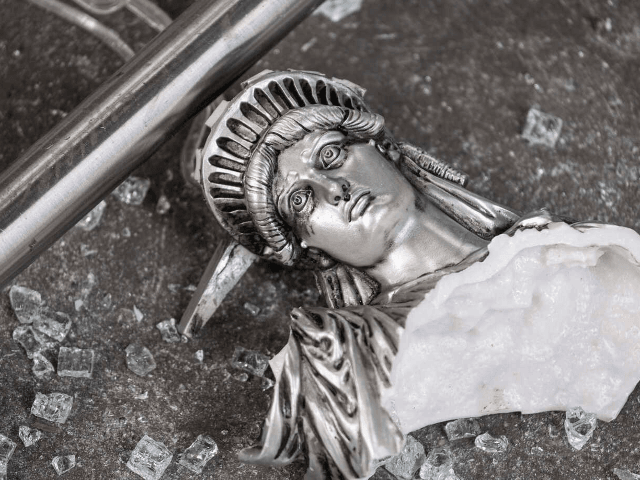 The column on Thursday was prompted by a frenzy of far-left demands in the United States to destroy statues of historical figures – particularly the first European to successfully navigate a voyage to the Americas, Christopher Columbus, and leaders of the failed “Confederate” insurgency that resulted in the American Civil War. Some extremists have also demanded making unavailable for public consumption artwork about the Confederacy, like the film Gone with the Wind, which resulted in the first Academy Award win for a black American actor in history. Several television programs depicting police work have also been canceled in response to violent rioting against police in major cities.

“Protests and riots across the U.S. sparked by the death of George Floyd have developed into a new stage – America’s Cultural Revolution, a broader social movement,” the Global Times declared. “Unfortunately, neither the protesters nor Democrats have come up with practical solution [sic] to address the long-standing racial problems, but are using the fury of the people to gain political benefit.”

The destruction of “counter-revolutionary” artwork is “something similar to what we did in the 1960s-1970s,” the Global Times quoted unnamed “Chinese netizens” as saying. As the Communist Party controls all Chinese social media, only Party-approved opinions are allowed. Chinese state news outlets use these Party-approved statements as alleged evidence of Chinese popular sentiment.

The Global Times cited “Chinese analysts” – Party-approved experts, who concluded that “these acts, such as targeting films and statues, as well as protests in other Western countries sparked by the same reasons, are all useless in solving the real problems faced by minorities and the lower class in the U.S.” The real problem is America’s “unfair social system,” the mouthpiece for a nation holding millions hostage in concentration camps concluded.

The true nature of the system, one “analyst” said, is proven by how Americans identify by different races and ethnicities “but not proletariat or bourgeoisie, which reflects the theory of Marxism.”

“The federalism and separation of powers in the U.S. has buried the seeds to potentially separate the country. But in the past, due to the unshakable U.S. hegemony, the country avoided this problem by plundering other countries through wars and US-led globalization,” another alleged “expert” said.

In another column on Thursday, the Global Times also railed against “political correctness” – apparently in contradiction to its approval of “America’s Cultural Revolution” – for being an insufficient fix to the blight of American values of individual freedom. Taking down statues and erasing films from history “are only temporary relief that will definitely fail to touch the core of the deep-rooted racial inequality in the U.S.,” the propaganda outlet concluded, adding that, despite the fact that America once allowed legal slavery, “ethnic minorities in today’s U.S. suffer more than ever.”

“Under the current US political structure, the problems of racial inequality are nearly impossible to be solved,” the Global Times concluded in its argument for totalitarianism. “Conflicts between Republicans and Democrats are becoming extremely intense. They will not compromise. Worse, both parties don’t even dare think about compromising. Hence, the impetus and vitality for reform are lost in the day-to-day party conflicts.”

Mao Zedong’s “Cultural Revolution,” in some ways an attempt to end the famine caused by the “Great Leap Forward,” was an extreme violent movement to silence, torture, kill, and sometimes eat “counter-revolutionaries” in society launched in the 1960s. University of Hong Kong Professor Frank Dikötter, who has studied archival documents from the time, described the campaign that preceded the Cultural Revolution as “an effort to gradually close down all very basic civil liberties” in a 2016 interview with NPR.

“The freedom of speech, the freedom of movement, the freedom of association, of belief, you name it – one by one are being gradually shut down as a – as the one-party state starts pretty much consolidating its power. So by the time that you’re in 1957, in particular in the countryside, most ordinary villages have lost control over their own land, over their own tools, sometimes even over their schedules,” Dikötter explained. “They’ve become pretty much bonded servants at the beck and call of local party officials. So it gradually – a gradual closing down of all liberties.”

By the time the Cultural Revolution began in 1966, these “bonded servants” had a mandate to torture and kill doctors, professors, and any professionals as “counter-revolutionaries.”

“Teenaged Red Guards beat teachers to death for being ‘counter-revolutionaries’ and family members denounced one another while factions clashed bitterly for control across the country,” the South China Morning Post noted in 2016.

That year, archival documents revealed that communists committed acts of cannibalism during the Cultural Revolution. An anonymous witness stated that, in Wuxuan, a southern city, “the hearts, livers, and genitals of victims were cut out and fed to revelers.”