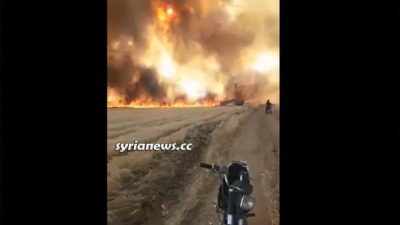 A video clip shared by local farmers from Ras Al-Ayn showing an inferno burning their livelihood before their eyes, hundreds of acres of wheat on fire just as the crop is due to harvest.

We’ve been reporting about these fires in areas of operation of the NATO’s Turkish (Orwellian-named) ‘Spring of Peace’ military operation in northern, and especially in northeastern Syria regions as well as in areas where remnants and sleeper cells of NATO-sponsored terrorists of ISIS and its affiliates are active in the south of the country.

The video is also available on BitChute and Dailymotion.

Truly, hearing is not like seeing, any person with the least sense of humanity, especially citizens of all NATO member countries as these crimes are committed in their names with their tax money making them accomplices in the crimes, should be appalled of these scenes and should condemn these war crimes and call for the culprits to face justice.

Syria has officially filed a complaint to the NATO-dominated United Nations Security Council against these crimes committed by terrorists operating directly under the protection and sponsorship of the Turkish Army TSK of NATO, with the help of their US allies. But we all know the hapless mechanism of the United Nations and how only resolutions in favor of NATO countries are implemented, and under its Article 7 of its Charter when needed, the article that enforces the resolutions with military power.

Burning of wheat crops started earlier by the US-sponsored Kurdish separatist SDF and Asayish militias in Qamishli, Hasakah, when the farmers refused to sell their crops to Turkey for cheap and be paid in Turkish Lira, they were insisted on selling it to the Syrian state for the fair price offered to them by their government and in the Syrian Lira, therefore, the Kurdish separatists looted their crops and burned down what they couldn’t loot.

US Blockade of Syria: A War Crime

These war crimes are part of the Trump regime’s ‘Maximum Pressure’ official policy against countries that do not accept puppet rulers loyal to the US working against the interests of their own people, Syria has been on the Pentagon’s destabilizing and threats since 1956 and these destabilization efforts and threats only increased through the past decades reaching this month with the so-called ‘Caesar Act‘, a US regime of sanctions approved by the ‘democratically elected representatives of the US citizens to Congress’ and by the ‘democratically elected president’ in addition to the already draconian sanctions imposed earlier to suffocate the last breath the Syrian ordinary people can take.

This ‘economic terrorism’ act comes at the same time the whole world is calling on the USA and its European minions to lift off the sanctions, instead, the EU renewed their illegal inhumane unilateral sanctions against Syria for one more year earlier this month and the US Special Envoy to Syria James Jeffery gloating about the hardship this act is causing the Syrian people bragged: ‘The hardship the Syrian are living and the collapse of their national currency is the result of our policies.:

The US-led War of Terror and Attrition War it is waging against the Syrian ordinary people under the guise of ‘helping them out of oppression’, these lies should stop but we are very much aware and especially after we saw how the policy of sucking the life out of people and not allowing them to breathe is deeply rooted in the US culture, we are not betting much on their humanity rather on their fear of Karma, you will reap what you sow sooner or later and on Judgment Day there won’t be elections to manipulate or hide behind or any navy carriers protecting you, you’ll be called individually to stand naked before your creator and in front of all humans to answer for your crimes against others, including your silence to the crimes committed in your name by your politicians and military and with your money.

All images in this article are from Syria News