It is not right that you do for a man who does not do for you. Why is it that Blacks do and do for the Democrats but the Democrats don’t do for them? I’ll tell you why? Because yo is a chump. Malcolm X

The total prison population rose by 673,000 people under Clinton’s tenure — or by 235,000 more than it did under President Ronald Reagan, according to a study by the Justice Policy Institute. Federal funding for public housing fell by $17 billion (a 61 percent reduction) under Bill Clinton’s tenure; federal funding for corrections rose by $19 billion (an increase of 171 percent). Under President Obama 19% of all federal prisoners were in private prisons. Prisoners are paid from 14 to 63 cents per hour.  Kamala Harris who claims to be half black paid prisoners $1 per hour to fight fires.  These were men who were supposed to have been released from prison but held at her whim after their release date. One black civil rights leader in Los Angeles said he would vote for Trump if Biden chose Harris for Vice-President.

An alternative to mass incarceration would be drug legalization. That would end the drive by shooting of innocent people in black neighborhoods. But it would subtract from the profits Bankers make from money laundering $1.5 trillion a year in illegal weapons, drugs and political bribes. We can conclude that Bankers are more important than black people to the Swamp Creatures in DC who run our government.

“Black crime rates were lower in the 1940s and 1950s, when black poverty was higher” and “racial discrimination was rampant and legal.”The following 3 minute video is a British comedic take on American prisons:

If it’s not racism and poverty that are blame for the high black crime rate, then what is?

It is obvious that blacks are far worse off today because Democrats do not like families. Their welfare policies were designed to keep black fathers away from their children and to make white social workers the head of household.

Let’s take a look at current proposals to defund the police. NYC has an annual budget of $89.3 billion. The police budget is $6 billion. Liberal Democrats want to cut the police budget a billion dollars a year. Cuts are to be deepest for school safety and the homeless. Rich people have fled the cities since the plandemic.  A public education in NYC, after school safety will be cut so drastically, should be considered child abuse. And yet this is where liberal Democrats will tell black parents they must send their children or be sent to prison.

41% of all black businesses have failed since the Plandemic due to lockdowns and the Antifa riots. The word Antifa means anti-fascism. They are Marxists so to them owning a business is fascism. Gutting businesses in every major city is part of their plan.

A black man prior to the Plandemic told a TV interviewer in Milwaukee why he and his family supported Trump. They were able to go into the landscaping business, make money and buy homes. Might I point out that the population of Mexico was 28 million in 1950. Today it is 132 million and there are 34 million Mexican-Americans.

Democrats want to cut wages and raise rents for blacks. That is what Open Borders means.

Black people and white women have been buying lots of guns since the riots began. But liberal Democrats want to defund the police and to eliminate guns so law abiding black people will be at the mercy of street thugs. Malcolm X would have opposed gun confiscation. 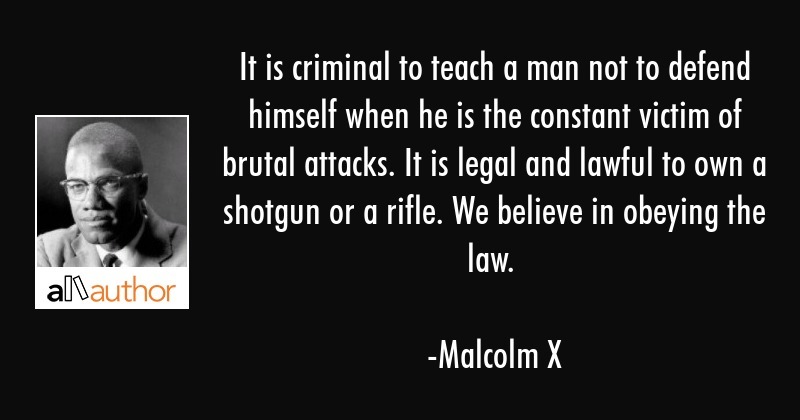 And what about public health? 6.1 millions apartment buildings and homes have lead lined water lines that deliver water contaminated with lead. A very high percentage of these people suffering from lead poisoning are black. And yet the DC Swamp Creatures subsidize Israel more then $3 billion a year not daring to alternatively spend the money improving public health for Americans.

Americans, black, white and others are routinely given contaminated vaccines. Big Pharma never uses a clean needle when a dirty one is available. 44 of 45 common vaccines recently tested for nano-particles that are harmful to human health. 20 million Americans were infected with a mouse retrovirus, XMRV -(Xenotropic Murine Leukemia Related Virus) that causes cancer and is thought to be responsible for other conditions that disabled millions of people – many of whom are black.

Malcolm X and Martin Luther King Jr both agreed that education was a key to the future. I was born in California and we used to have good schools. More recently I worked at an Internet store in Silicon Valley. We had a couple dozen people in my crew. I soon figured out that recent graduates of the California public schools did not comprehend what an alphabet was. If you were in front of bookshelf with titles staring with the letter C and you were looking for a book starting with a D, you had to go to the right. Illegal aliens from Mexico with a 6th grade education knew that. California working class kids with 12 years of public education did not. Anyone who creates such a school system as they have in California despises children of all races.

I recently wrote that the people who own the Conglomerates liked lockdowns and plandemics because: 1) they want to create tens of trillions of dollars to paper over the frauds they committed. 2) They wanted the lockdowns to bankrupt small and mid-size businesses 3) They want you dead because they stole all the pension money.

The Boss Wants You Dead