Fully referenced facts about Covid-19, provided by experts in the field, to help our readers make a realistic risk assessment. (Regular updates below)

Stanford professor John Ioannidis published an overview of Covid-19 antibody studies. According to his analysis, the lethality of Covid19 (IFR) is below 0.16% in most countries and regions. Ioannidis found an upper limit of 0.40% for three hotspots.

In its latest report, the US health authority CDC reduced the Covid19 lethality (IFR) to 0.26% (best estimate). Even this value may still be seen as an upper limit, since the CDC conservatively assumes 35% asymptomatic cases, while most studies indicate 50 to 80% asymptomatic cases.

At the end of May, however, Swiss immunologists led by Professor Onur Boyman published what is probably the most important study on Covid19 lethality to date. This preprint study comes to the conclusion that the usual antibody tests that measure antibodies in the blood (IgG and IgM) can recognize at most one fifth of all Covid19 infections.

The reason for this discrepancy is that in most people the new coronavirus is already neutralized by antibodies on the mucous membrane (IgA) or by cellular immunity (T-cells). In most of these cases, no symptoms or only mild symptoms develop.

This means that the new coronavirus is probably much more common than previously thought and the lethality per infection is up to five times lower than previously assumed. The real lethality could thus be well below 0.1% and hence in the range of strong seasonal influenza.

In fact, several studies have now shown that up to 60% of all people already have a certain cellular immunity to Covid-19, which was acquired through contact with previous coronaviruses (common cold viruses). Children in particular often come into contact with such coronaviruses, which could help explain their insensitivity to Covid19.

The new Swiss study may also explain why antibody studies even in hotspots like New York or Madrid found infection rates of at most about 20%, as this would correspond to an actual rate of nearly 100%. In many regions, the actual prevalence might already be well over 50% and thus in the range of herd immunity.

Should the Swiss study be confirmed, the assessment of Oxford epidemiologist Prof. Sunetra Gupta would apply, who predicted early on that Covid-19 is very widespread and its lethality below 0.1%.

Despite the comparatively low lethality of Covid-19 (deaths per infection), the mortality (deaths per population) can still be increased regionally and in the short term if the virus spreads rapidly and reaches high risk groups, especially patients in nursing homes, as indeed happened in several hotspots (see below).

Due to its rather low lethality, Covid-19 falls at most into level 2 of the five-level pandemic plan developed by US health authorities. For this level, only the “voluntary isolation of sick people” is to be applied, while further measures such as face masks, school closings, distance rules, contact tracing, vaccinations and lockdowns of entire societies are not recommended.

Regarding contact tracing, a WHO study on influenza pandemics from 2019 also came to the conclusion that from a medical point of view this is “under no circumstances recommended”, since it is not expedient for easily communicable and generally mild respiratory diseases.

It is sometimes argued that the rather low lethality was not known at the beginning of the pandemic. This is not entirely true, as data from South Korea, the cruise ships and even from Italy already showed in March that the risk to the general population is rather low.

Many health authorities also knew this, as leaked emails from Denmark in mid-March show: “The Danish Health Authority continues to consider that Covid-19 cannot be described as a generally dangerous disease, as it does not have either a usually serious course or a high mortality rate.”

Some media nevertheless continue to calculate an allegedly much higher Covid19 lethality rate of sometimes over 1% by simply dividing deaths by “infections”, without taking into account the age and risk distribution, which is absolutely crucial especially for Covid19.

The latest data from the European mortality monitoring Euromomo shows that several countries such as France, Italy and Spain are already entering a below-average mortality. The reason for this is that the average age of Covid19 deaths was very high and fewer people than usual are now dying in this age group. 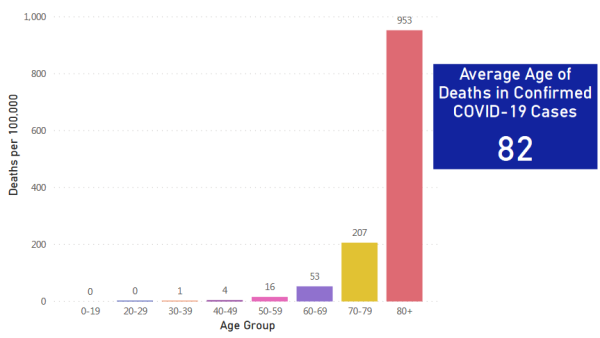 The role of nursing homes

It is all the more worrying that some authorities have obliged their nursing homes to admit Covid patients from the clinics, which has almost always resulted in numerous new infections and deaths. This happened in northern Italy, England and the heavily affected US states of New York, New Jersey and Pennsylvania.

It is also known from northern Italy that the widespread fear of the virus and the announced lockdown of the country led to the flight of the predominantly Eastern European nurses, which further accelerated the breakdown of elderly care.

In the United States, at least 42% of all Covid19 deaths are accounted for by 0.6% of the population living in nursing homes. Nursing homes require targeted protection and do not benefit from a general lockdown of society as a whole.

It is well known that even common corona viruses (cold viruses) can be very dangerous for people in nursing homes. Stanford professor John Ioannidis pointed out already in mid-March that coronaviruses may have a case mortality rate of up to 8% in nursing homes.

In addition, it is often not clear whether these people really died from Covid-19 or from weeks of stress and total isolation. For example, there were approximately 30,000 additional deaths in English nursing homes, but in only 10,000 cases, Covid19 is noted on the death certificate.

In April alone, around 10,000 additional dementia patients without corona infection died in England and Wales due to weeks of isolation. Investigations into the situation in nursing homes have been initiated or requested in several countries. 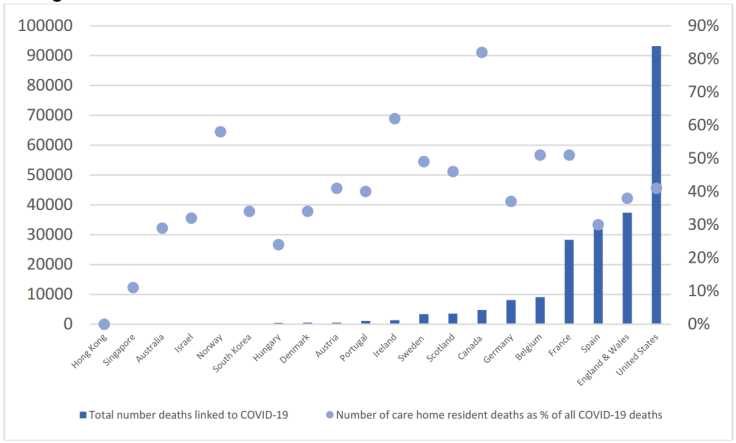 The role of hospitals

The second central factor regarding infections and deaths, in addition to the nursing homes, are the hospitals themselves. A case study in Wuhan already showed that around 41% of hospitalized Covid patients had in fact contracted Covid in the hospital itself.

Contagion in hospitals also played a decisive role in northern Italy, Spain, England and other regions that were severely affected, meaning that the clinics themselves became the main place of transmission of Covid19 to already weakened people (so-called nosocomial infection) – an issue that had already been observed during the SARS outbreak from 2003.

Based on current knowledge, those countries that managed to avoid outbreaks of infection in nursing homes and hospitals had comparatively few deaths. The general lockdown of society, however, played no role or even a counterproductive role (see below).

An additional factor is the sometimes fatal medical mistreatment of Covid patients with aggressive drugs or invasive ventilation, the risks of which experts have been warning about for months. In the US, for example, there have been questionable financial incentives to connect Covid patients to ventilators, a practice that is now being investigated in several states.

The clinical picture of Covid-19

Professor Püschel again emphasized that Covid-19 “is not nearly as threatening as was initially suspected”. The danger was “too much influenced by media images”. The media had focused on severe individual cases and fueled panic with “completely wrong messages”. Covid-19 is not a “killer virus” and the call for new medicine or vaccines is “driven by fear, not facts.”

The specific cause of death of the examined cases was pneumonia, but in about 50% of the cases there were venous thrombosis in the legs, which can lead to fatal pulmonary embolism. The kidneys and heart muscle were also partially affected. Professor Püschel therefore recommends the preventive administration of blood-thinning medication for serious Covid cases.