OF THE AMERICAN PEOPLE’S ECONOMY AND
OUR CONSTITUTION RIGHTS, FREEDOMS AND PRIVACY

46 million Americans lost jobs within 2-1/2 months
How many are NOT PsyOp Hoax COVID-19 but the common flu
and/or preexisting conditions and/or 5G Ultra High RADIATION?!

COVID-19 turning out to be huge hoax perpetrated by media …

99% of coronavirus fatalities in Italy had other illnesses

According to LifeSiteNews, [November 2014] a Catholic publication, the Kenya Catholic Doctors Association is charging UNICEF and WHO with sterilizing millions of girls and women under cover of an anti-tetanus vaccination program sponsored by the Kenyan government.The Kenyan government denies there is anything wrong with the vaccine, and says it is perfectly safe.

The Kenya Catholic Doctors Association, however, saw evidence to the contrary, and had six different samples of the tetanus vaccine from various locations around Kenya sent to an independent laboratory in South Africa for testing.

The results confirmed their worst fears: all six samples tested positive for the HCG antigen. The HCG antigen is used in anti-fertility vaccines, but was found present in tetanus vaccines targeted to young girls and women of childbearing age. Dr. Ngare, spokesman for the Kenya Catholic Doctors Association, stated in a bulletin released November 4:

“This proved right our worst fears; that this WHO campaign is not about eradicating neonatal tetanus but a well-coordinated forceful population control mass sterilization exercise using a proven fertility regulating vaccine. This evidence was presented to the Ministry of Health before the third round of immunization but was ignored.” (Source.)

Dr. Ngare brought up several points about the mass tetanus vaccination program in Kenya that caused the Catholic doctors to become suspicious:

Dr. Ngare told LifeSiteNews that several things alerted doctors in the Church’s far-flung medical system of 54 hospitals, 83 health centres, and 17 medical and nursing schools to the possibility the anti-tetanus campaign was secretly an anti-fertility campaign.

Why, they ask does it involve an unprecedented five shots (or “jabs” as they are known, in Kenya) over more than two years and why is it applied only to women of childbearing years, and why is it being conducted without the usual fanfare of government publicity?

“Usually we give a series three shots over two to three years, we give it anyone who comes into the clinic with an open wound, men, women or children.” said Dr. Ngare.

But it is the five vaccination regime that is most alarming. “The only time tetanus vaccine has been given in five doses is when it is used as a carrier in fertility regulating vaccines laced with the pregnancy hormone, Human Chorionic Gonadotropin (HCG) developed by WHO in 1992.” (Source.)

UNICEF: A History of Taking Advantage of Disasters to Mass Vaccinate

Indian doctors blame the Gates campaign for a devastating vaccine-strain polio epidemic that paralyzed 496,000 children between 2000 and 2017.

In 2017, the Indian Government dialed back Gates’ vaccine regimen and evicted Gates and his cronies from the NAB.  Polio paralysis rates dropped precipitously.

The Gates Foundation invests in Dr. Fauci’s NIAID as part of its Decade of Vaccines program which aims to introduce a Global Vaccine Action Plan. Kennedy Jr said that Dr. Fauci owns a …

Dr. Anthony Fauci, who has become a beloved doom prophet fomenting mass hysteria among the American public amidst the coronavirus pandemic, once worked with technocratic oligarch Bill Gates on his “Global Vaccine Action Plan.”  Activist reporter Mike Coudrey drew attention to this fact on his Twitter account in a post from Sunday:

How the UN, WHO, Soros, Fauci, and Gates Set the Stage and …

How the United Nations, the World Health Organization, George Soros, Anthony Fauci, and Bill Gates Set the Stage and Captured the World…

Fauci Photographed With Soros and Bill Gates’ Father, Who Was ‘Head of Planned Parenthood’ 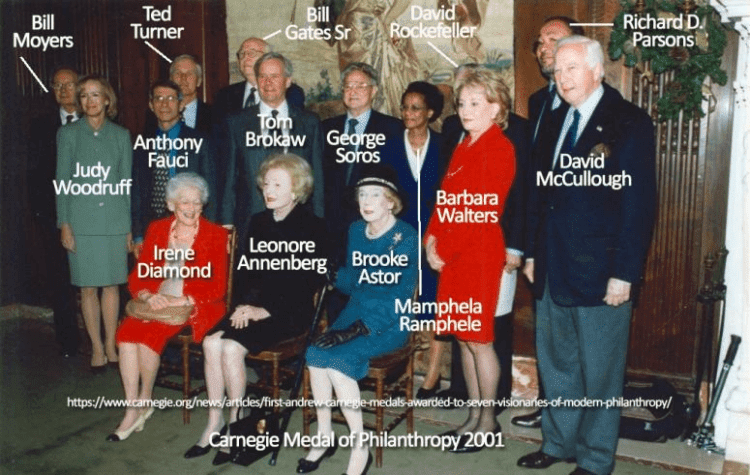 Fauci was a presenter at the 2001 Andrew Carnegie Medals ceremony, where he hobnobbed with George Soros, Bill Gates’ father, David Rockefeller, and other globalist masters of the universe.   WOW: A high-level source just sent me this photo, says that it shows Dr. FAUCI with George SOROS and Bill Gates’ father among others.