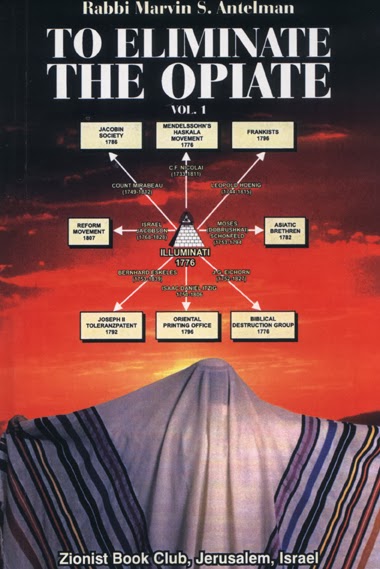 To Eliminate the Opiate: Vol. 1

To Eliminate the Opiate’ Volume One was originally published in 1973. It was the first well-presented history of the conspiratorial efforts to subvert and undermine Judaism. Read about: Jacob Frank, to whom sin was holy. Adam Weishaupt, the Jesuit priest who founded the Illuminati on May Day 1776, from which the Communist Party emerged. How Weishaupt’s Illuminati and Frank’s Frankists Worked hand in hand to destroy religions and governments. The connection between the Frankists, Illuminati, Jacobins and the French Revolution that changed society. Why Jewish-born Karl Marx was an anti-Semite and Wrote A World Without Jews. The 18th Century roots of the Women’s Liberation movement. How the Illuminati founded artificial Judaism. Why the Frankists provided the leadership for the Reform and Conservative movements. How Judaism was labeled “Orthodox” in order to destroy it. How the Lubavitcher Rebbe foiled a mass assimilation conspiracy in Russia. The plot to destroy the Torah through the field of Biblical criticism. Why today’s Reform clerics gravitate to Communism, Communist causes, and support Black anti-Semitic groups. Why the wealthy financed Communist revolutions. Why Black civic leader Elma Lewis sued the author for a half million dollars and lost. The true sources for the Frankenstein Monster. The significance of mystical designs on the American dollar bill.